A procession of firetrucks make their way along Old Harrisburg Road en route to the Buchanan Valley firehouse following a memorial service for Walter Wagaman at Gettysburg High School on Sunday. 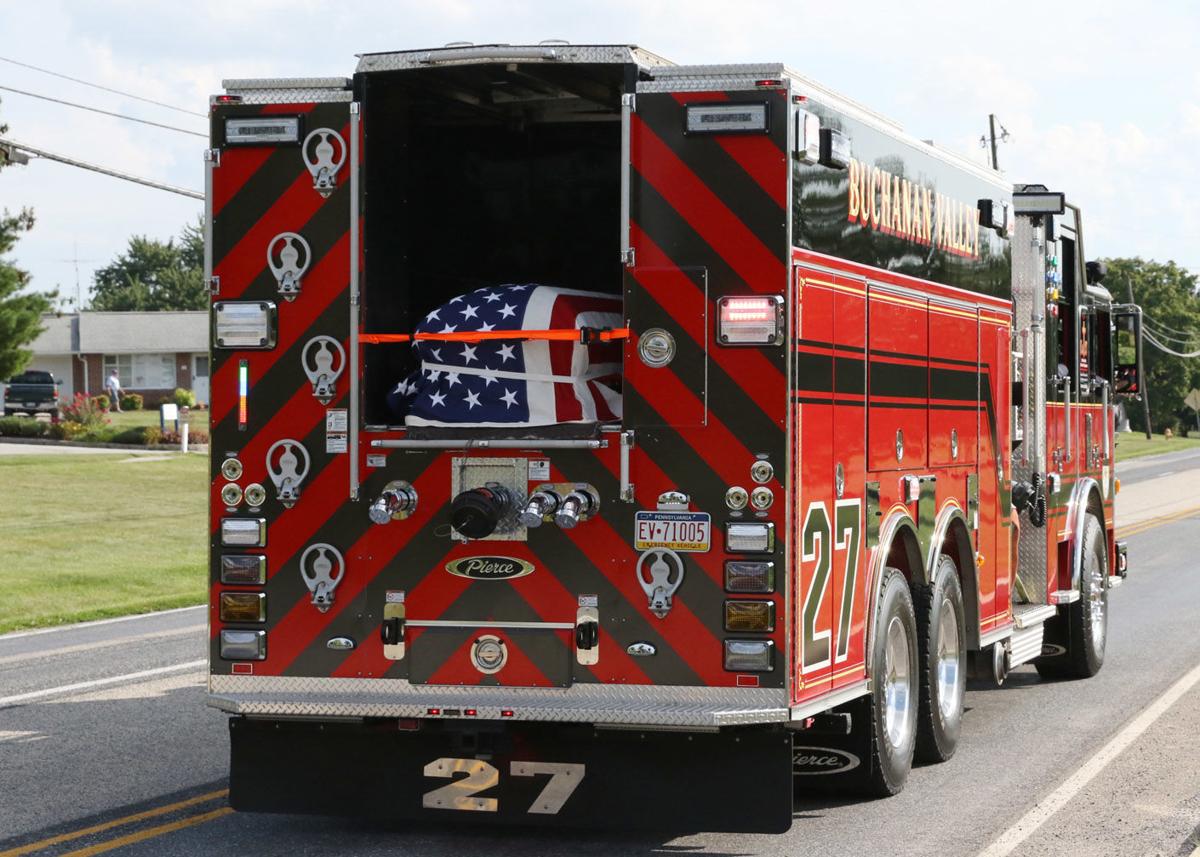 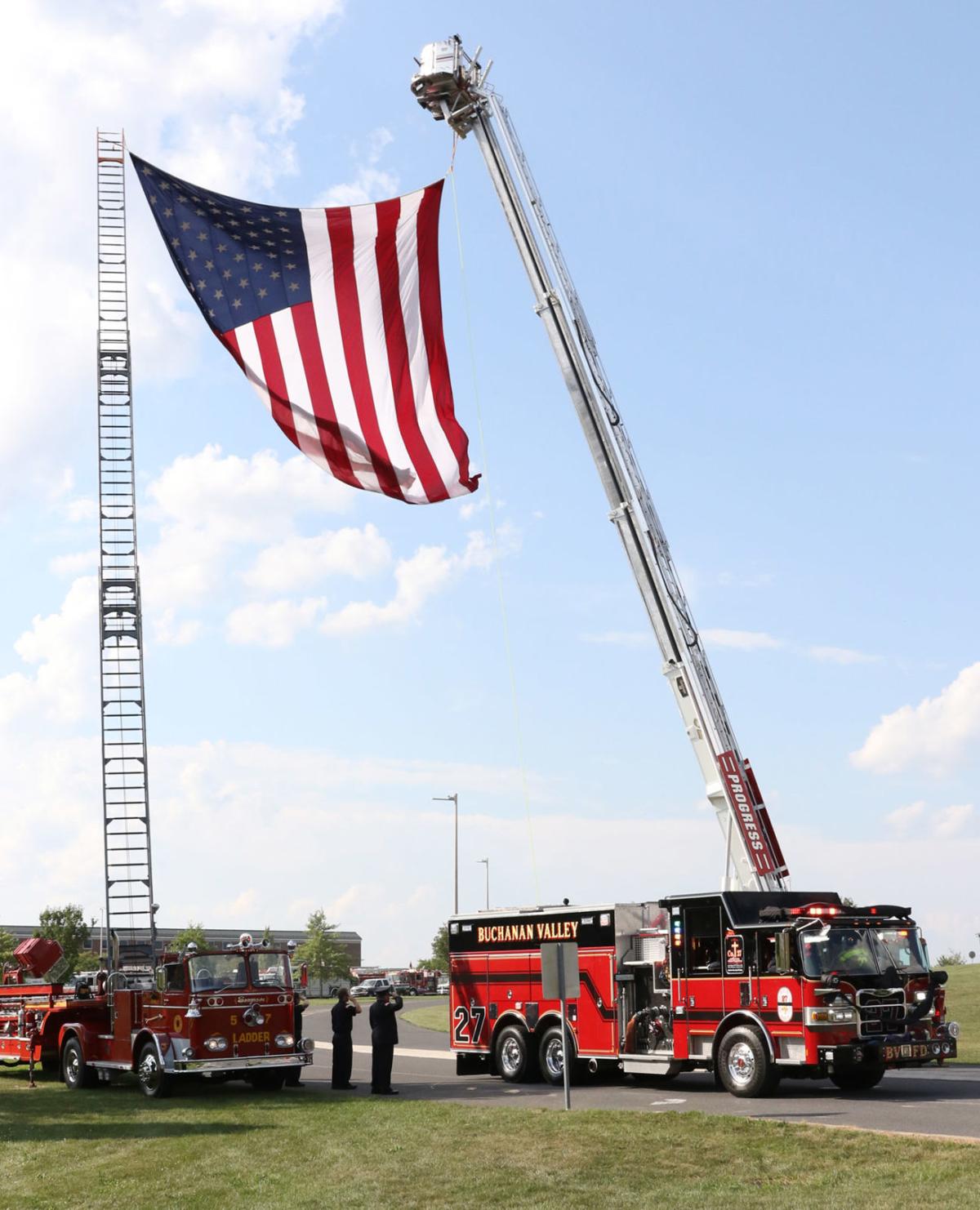 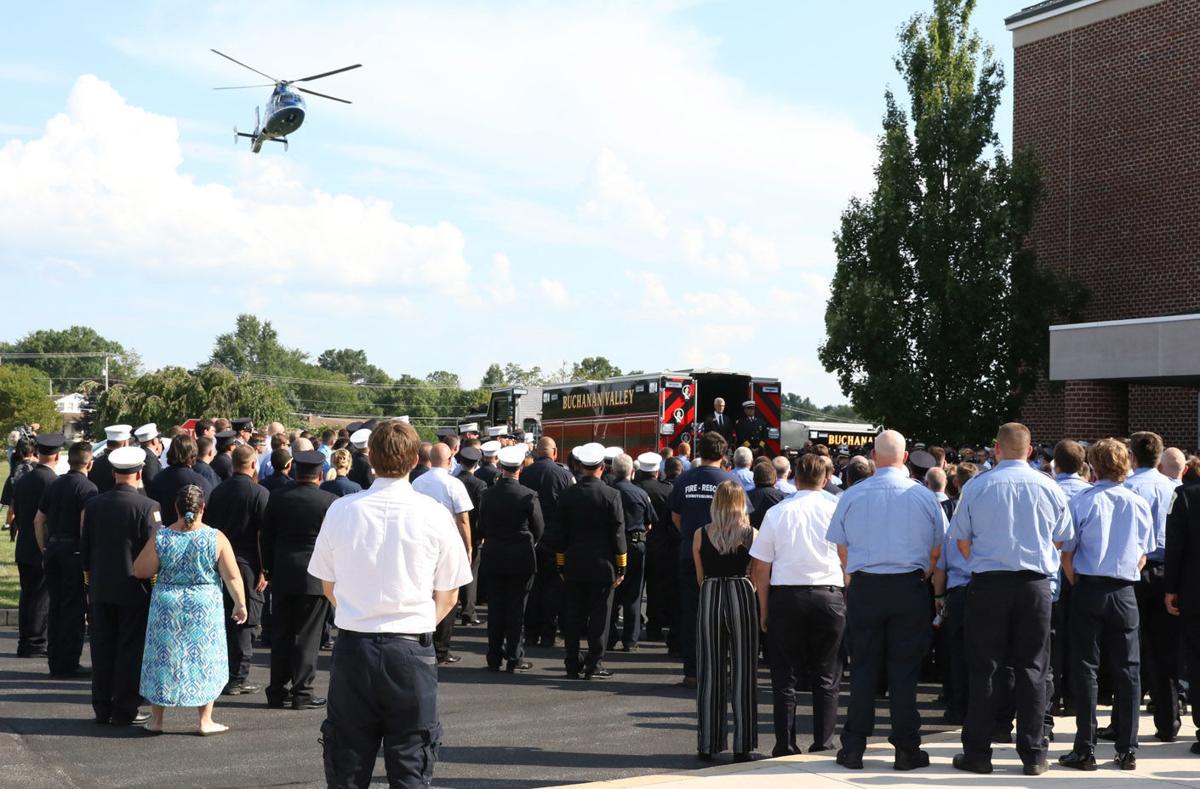 Lion Lion hovered over the crowd of firefighters following the service in the Gettysburg High School auditorium on Sunday. 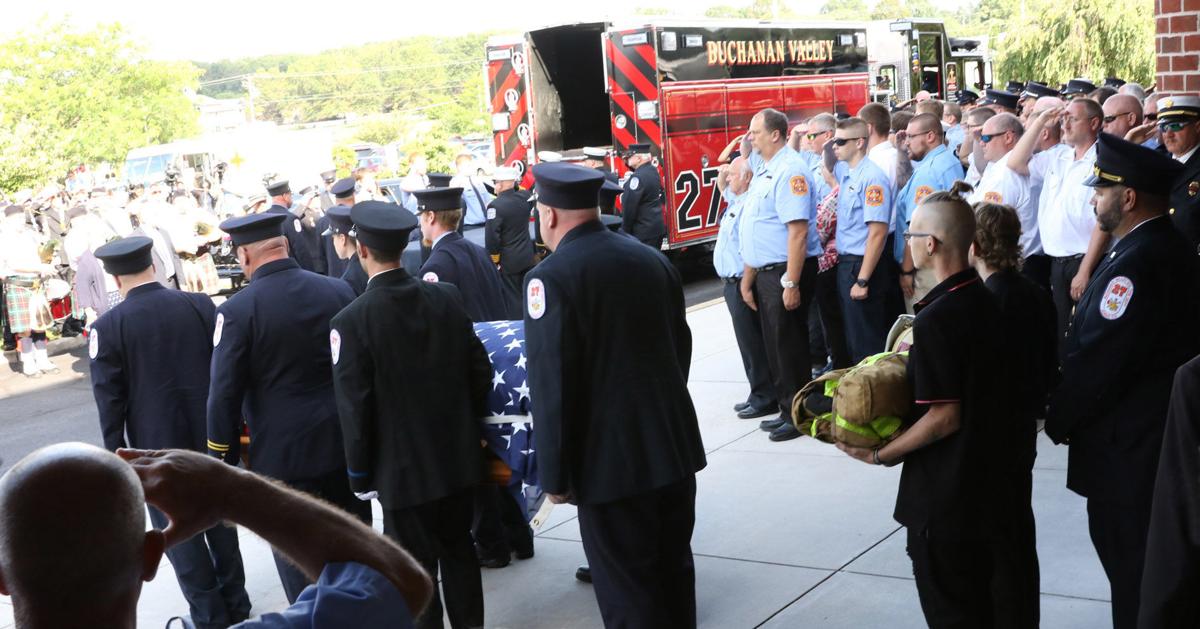 Firefighters salute as the casket containing Walter Wagaman is carried to the Buchanan Valley firetruck following a service at the Gettysburg High School on Sunday.

Some of the firefighters who attended the memorial service for Walter Wagaman walk by the firetrucks to the Gettysburg High School auditorium on Sunday.

A procession of firetrucks make their way along Old Harrisburg Road en route to the Buchanan Valley firehouse following a memorial service for Walter Wagaman at Gettysburg High School on Sunday.

Lion Lion hovered over the crowd of firefighters following the service in the Gettysburg High School auditorium on Sunday.

Firefighters salute as the casket containing Walter Wagaman is carried to the Buchanan Valley firetruck following a service at the Gettysburg High School on Sunday.

Some of the firefighters who attended the memorial service for Walter Wagaman walk by the firetrucks to the Gettysburg High School auditorium on Sunday.

Approximately 100 emergency vehicles from across the region formed a procession after the funeral service at Gettysburg Area High School, passing under a huge U.S. flag supported by two ladder trucks.

As those attending the service entered the school auditorium, they passed between two columns of uniformed honor guard members.

Kilted bagpipers and drummers marched in to begin the service.

A recorded song, “Jealous of the Angels,” played as photographs of Wagaman were displayed on a screen beside the stage. The casket was situated at the foot of the stage, flanked by flags and wreaths.

But “Walter gave the ultimate sacrifice, and now the title he has is hero,” Baldwin said.

Another title elicited chuckles from the audience. Wagaman was the “chicken-cooker” at department fundraisers, Baldwin said.

“We actually believe he was trying to put KFC out of business,” Baldwin said.

Wagaman was “a humble man,” and “it was important to him to encourage the youth,” Baldwin said.

That so many people attended the service, “truly means a lot to us,” especially because many traveled long distances, he said.

“I’m sure he’s grinning ear to ear watching this” because the service brought so many people together, Buchanan Valley Fire Chief Michael Spielman said.

If the service were for someone else, Wagaman would have taken it upon himself to order flowers, send vehicles for a procession, and cook for the reception, Spielman said.

“He was always there” for whatever needed to be done, Spielman said.

Wagaman was moved when his fellow department members voted him Member of the Year this past year, but he said he wasn’t in the fire service to win awards, Spielman said. Instead, Wagaman’s goal was always to “serve the community,” Spielman said.

In one, the divine voice asks, “Whom shall I send, and who will go for us?” and the answer is “Here am I; send me.”

Parr, himself a past Buchanan Valley fire chief, said firefighters answer the call even though they know they might not come home.

The other passage is a promise: “When thou passest through the waters, I will be with thee … when thou walkest through the fire, thou shalt not be burned; neither shall the flame kindle upon thee.”

“This is encouragement. This is where you receive the courage to do what you do,” Parr said.

The pastor raised his lighted cellphone and waved it slowly back and forth above his head. Many in the audience joined him in the gesture, creating an ocean of moving light as a recorded song played, “Go Rest High on the Mountain.”

“Walt is waiting for us on the other side of the Jordan,” Parr said.

Those in uniform were asked to leave the service first to create a “sea of blue” for the bereaved family to behold.

The four pipers and three drummers played. Walking after them were uniformed firefighters carrying Wagaman’s helmet and coat, the fire company number 27 visible on them. They were placed prominently in the windshield area of the fire engine that bore Wagaman’s casket.

The procession traveled from the school through Gettysburg, then along U.S. Route 30 to the Buchanan Valley station about 10 miles northwest of Gettysburg, where a reception was planned.

Streets along the route were blocked in Gettysburg. Groups of people stood at the roadside along the way, those in uniform saluting and others waving U.S. flags or placing their hands or hats over their hearts.

Many of the engines bore black bunting across their front ends or shrouding their rooftop flashing lights.

Some Buchanan Valley engines featured tributes to Wagaman affixed to their windows. “In loving memory,” they read, and “died in the line of duty.”

At 6:50 p.m. Sunday, the Adams County Department of Emergency Services issued a final call for Wagaman, sounding a series of radio dispatch tones. When there was no response, a dispatcher announced Wagaman’s line-of-duty death and, employing what is usually a routine phrase, said Wagaman was “out of service.”

“See you when the whistle blows,” the dispatcher said with emotion in his voice.

Wagaman’s injuries occurred when he was ejected from the passenger area of an engine as it turned from Aspers-Bendersville Road onto Carlisle Road. Many emergency personnel lined the hallways at WellSpan York Hospital for an “honor walk” prior to the donation of his organs to those in need.

Vote for your Winter Sports Athlete of the Week. Voting is opening until 5 p.m. on Thursday. The winner will be announced in Friday's edition of the Times.