Code Ninjas Guru Brendan Gass, left, works with a student as they learn to fly a drone through an obstacle course. 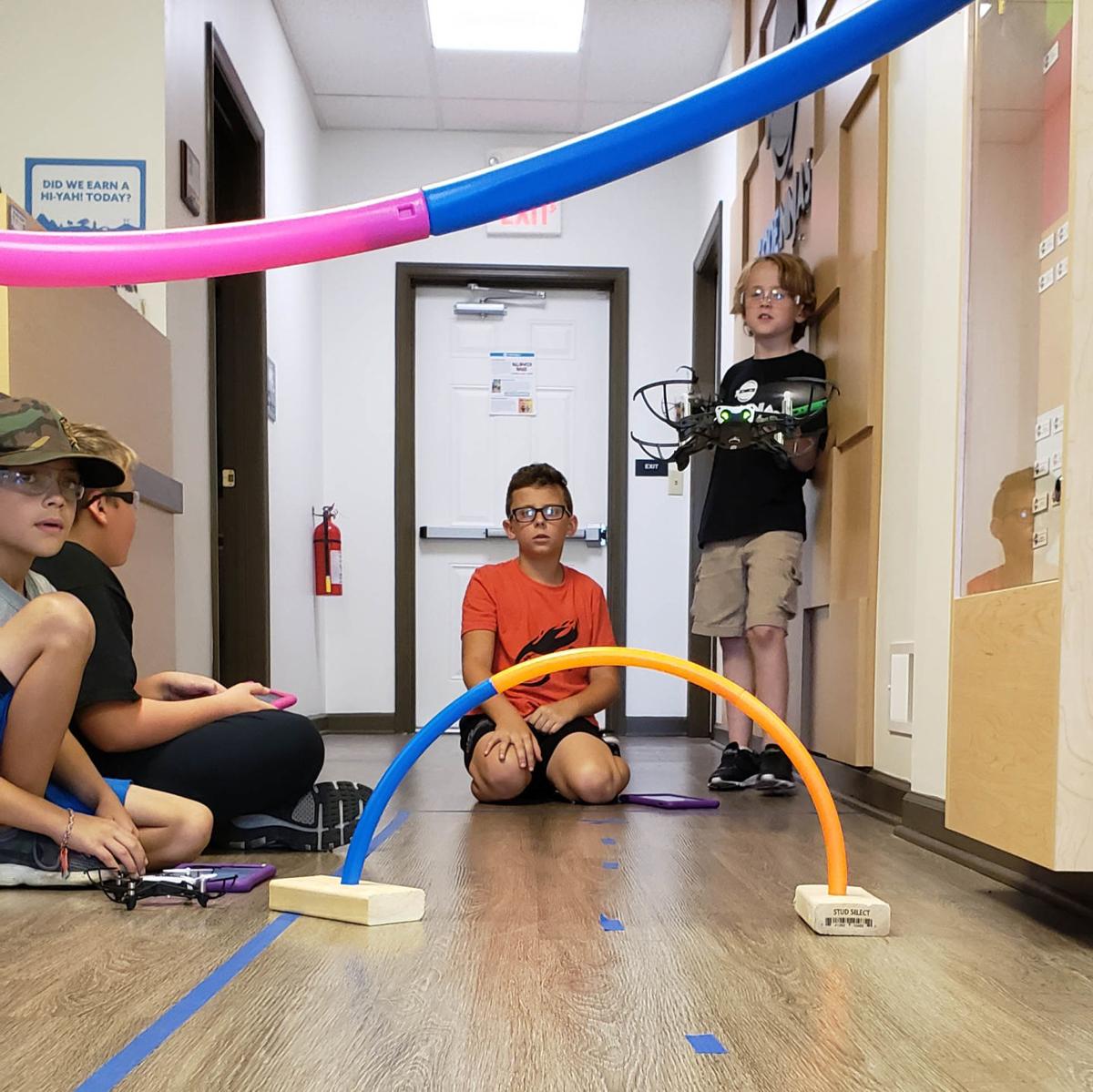 Students at Code Ninjas attempt to fly a drone through an obstacle course, one of the many challenges on the path to technological "enlightenment." 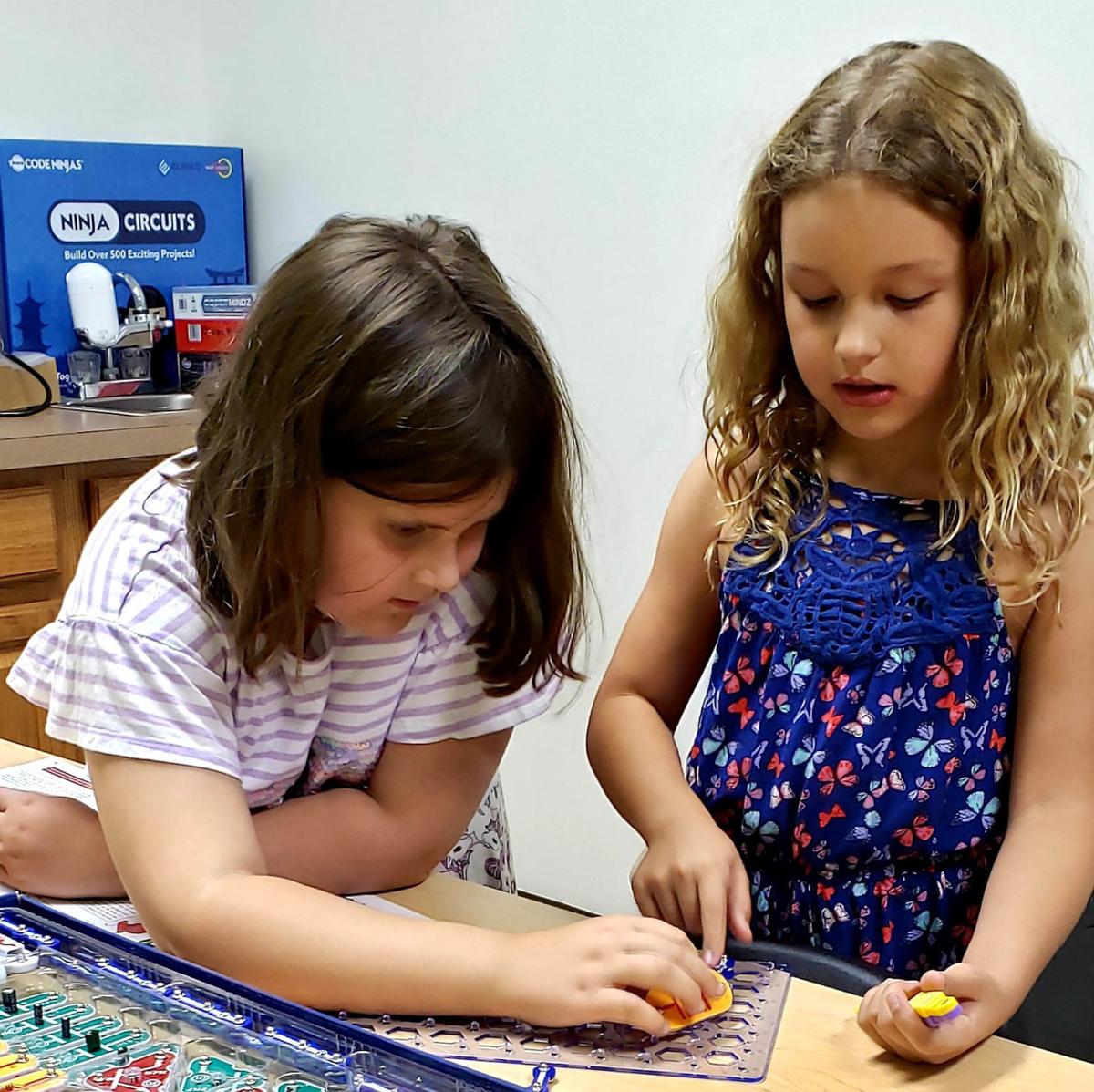 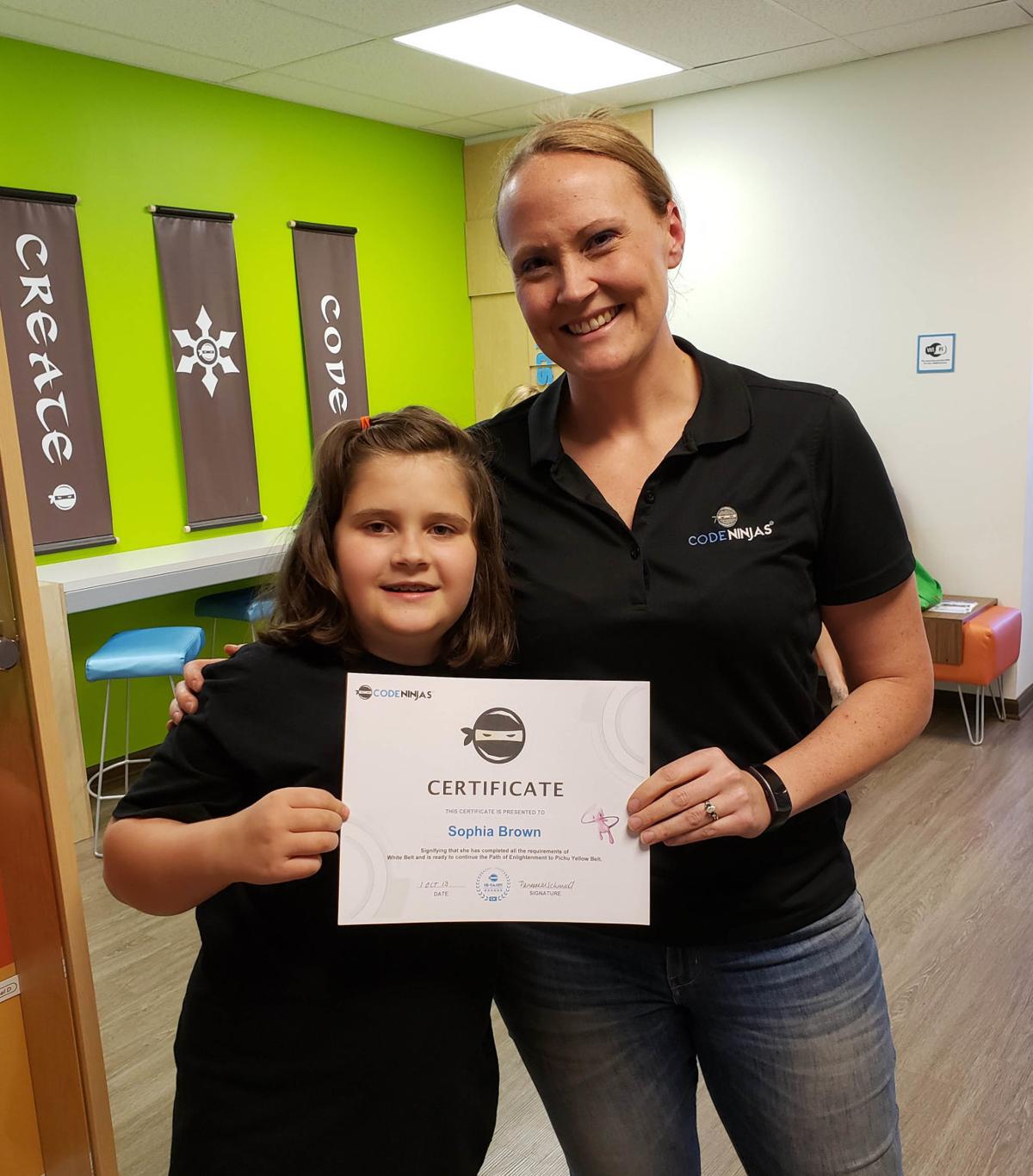 Student Sophia Brown, left, and Vanessa Schmidt, Code Ninjas co-owner, pose after a “belting ceremony,” in which Brown elevated herself on the path to technological “enlightenment.” 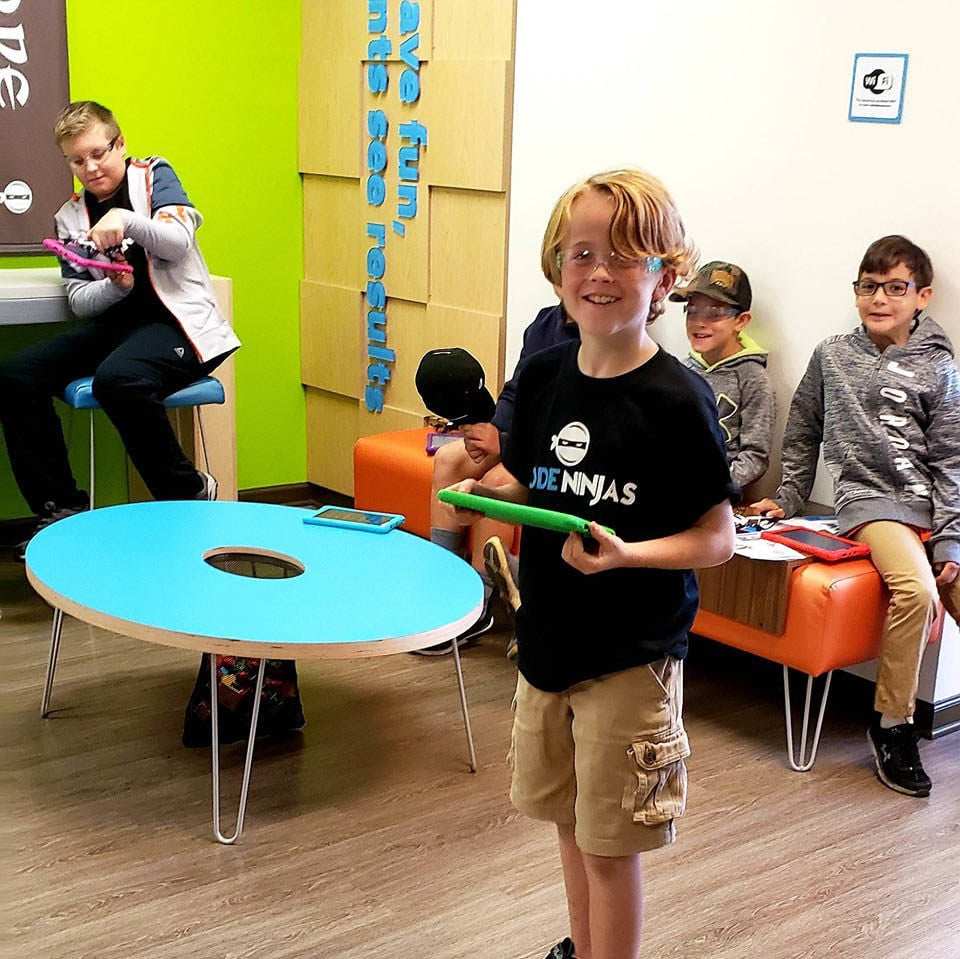 A student flies a drone during a session at Code Ninjas. 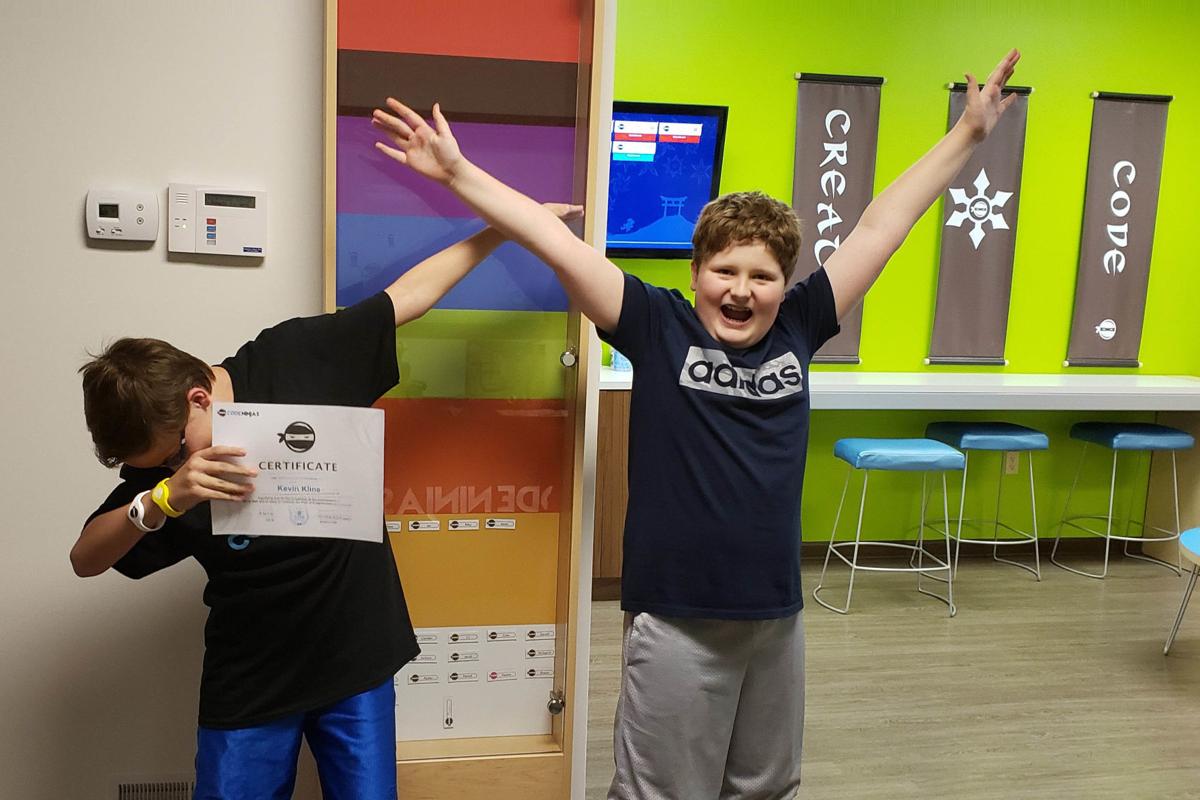 A pair of students celebrate as they jump to the next level on the path to technological “enlightenment” at Code Ninjas.

Code Ninjas Guru Brendan Gass, left, works with a student as they learn to fly a drone through an obstacle course.

Students at Code Ninjas attempt to fly a drone through an obstacle course, one of the many challenges on the path to technological "enlightenment."

Student Sophia Brown, left, and Vanessa Schmidt, Code Ninjas co-owner, pose after a “belting ceremony,” in which Brown elevated herself on the path to technological “enlightenment.”

A student flies a drone during a session at Code Ninjas.

A pair of students celebrate as they jump to the next level on the path to technological “enlightenment” at Code Ninjas.

Many parents are caught in a similar predicament. They want to limit their children’s screen time on video games, television and tablets, yet they want to be supportive of the passions that inspire their kids in an evolving world.

Vanessa and Joshua Schmidt understand the difficulty. They wanted to help create a solution for this problem in their hometown. That’s how Code Ninjas — an after-school center to teach children to code — arrived in Hanover. The company’s goal is to teach young kids that there’s more to computers than instant gratification.

“Technology is everywhere now,” said Vanessa, a co-owner of the Code Ninjas Hanover branch. “You cannot find a kid who hasn’t touched a tablet, asked for their parents’ phone or played video games. Having something available to help kids understand the inner workings of computers is very valuable in the long run.”

It looks like a plain office building from the outside, but inside Code Ninjas, located at 1225 Carlisle St., Suite 3, Hanover, is a colorful laboratory for future engineers and programmers.

Robots, laptops and tablets can be found within the dojos of the coding center, where students earn colorful bracelets by surpassing challenges on the way to becoming proficient in coding.

Every week, students ages 7 to 14 can come for two sessions, each an hour long, to be taught the basics of coding. They are introduced to senseis, typically older students or teachers, who walk them through gradually increasing challenges. At the entry level, students learn to code and command robots. Later, they are given the tools to build their own apps that can eventually be sold on digital stores.

The Schmidts have been impressed with how frequently seemingly shy kids have grown to become animated when given the opportunity to interact in a more innovative way with technology.

“We want this to become a safe haven for those kids that are not in karate, not in baseball, or other things,” Vanessa said. “This is who they are.”

Former software developer David Graham started the franchise in Houston, Texas in 2016. In just a few years the company has grown to support more than 200 locations. By square feet and maximum student population, the Hanover coding center is about half the size of any other in the Code Ninjas network. Vanessa said it’s the first operating under the company’s small business model.

The Schmidts were unintimidated by being the “guinea pig” for the model, Vanessa said. Bringing technology to a smaller community is exactly what they had in mind when they opened in May. Being able to do so where the South Western High School grads grew up made it all the better. Plus, the recent promotion of tech prep education by several local school districts made Hanover a natural fit, Vanessa said.

“We’re really excited to bring what we do to the population of kids in this area,” Vanessa said. “Just because it’s a small town doesn’t mean the kids don’t deserve it or can’t do it.”

The Code Ninjas curriculum focuses on teaching JavaScript, a commonly used, high-level programming language. It’s an ideal base language not only because of the frequency of use, but also because it teaches core concepts used in nearly every other coding language, Vanessa said.

As they rise through levels of mastery, students earn new color-coded bracelets. Much like in martial arts, the color of the bracelet signifies the depth of their understanding. Each level takes 10 to 12 weeks to get through on average.

“Coding is a language,” Vanessa said. “You don’t learn German or Mandarin in a week. It’s something you have to continuously work on. If you have the capabilities and can stop by, you can use that sustained time and learn this language and coding concepts.”

Once a student aces their skills test, they are invited to a ceremony in which they smash a gong and are given a certification that signifies they’ve surpassed another step toward technological “enlightenment,” Vanessa said.

One of the senseis, Brendan Gass, is a senior at New Oxford High School who has completed the classes offered at his school. A member of the Pod Squad, a student-run tech team, Gass was told that he would likely find fun challenges as an instructor at Code Ninjas. Once he began, he was surprised to find out that his education only elevated him to a purple, or mid-tier code ninja.

“I was always interested in computers so I probably really would’ve enjoyed this as a kid and know a lot more than I do now,” he said.

Adults who studied coding in later stages of life may be surprised to see how intuitive the curriculum can be, said Vanessa, who first dabbled in coding while in high school.

That’s not to say there won’t be mistakes. One of the tenants of code ninjas is to teach children that failure is a part of the path to success, Vanessa said.

Early testimonials from the class provide some glowing reviews. Some students who hadn’t showed interest in other parent-introduced activities have thrived in the environment. Others have benefited socially, finding friends with common interests and a hobby that expands their understanding of the world, Main said.

“We love hearing that. This is about developing other skill sets, too,” Vanessa said. “Focus, multitasking, teamwork and collaboration.”

Eight one-hour sessions cost $199 and are spread out over the course of a month. The business is open Tuesday through Friday, 3 to 8 p.m. and on Saturdays, 10 a.m. to 2 p.m. Students may arrive anytime between those hours up to twice a week.

Under the current model, students over the age of 14 will not be able to join, but anyone who ages out and would like to continue their education can stay, Vanessa said. The business model allow for up to 60 active students. There are still plenty of openings available, she added.

“I’m a mom and a business owner and I know what it’s like to come home, be tired, make dinner and help the kids with homework,” she said. “Come when you can and we’ll be here for you.”