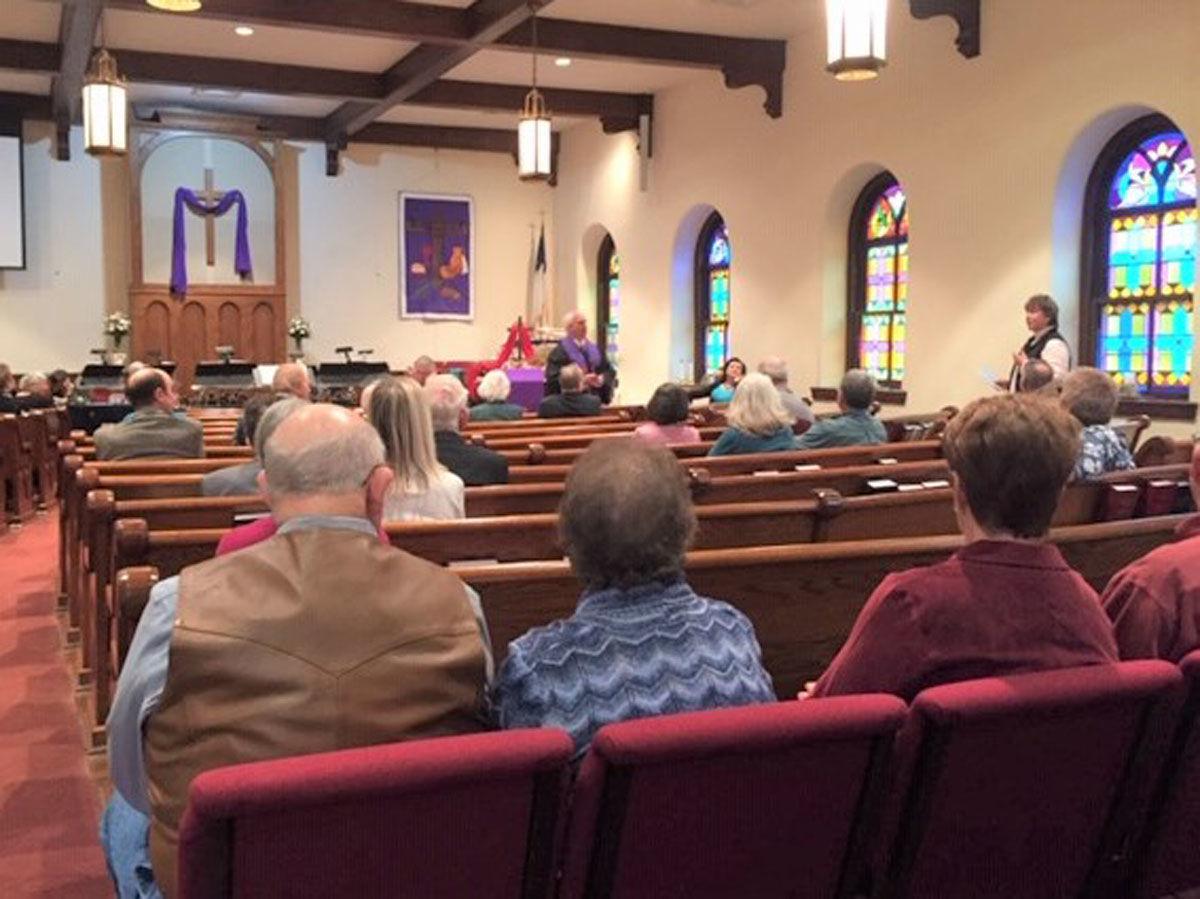 WORSHIP — At Lower Marsh Creek Presbyterian Church on Sunday morning, Pastor Mark Englund-Krieger invited parishioners to share concerns and suggestions for coping with the coronavirus pandemic. For now, the church plans to continue holding worship on its usual schedule. 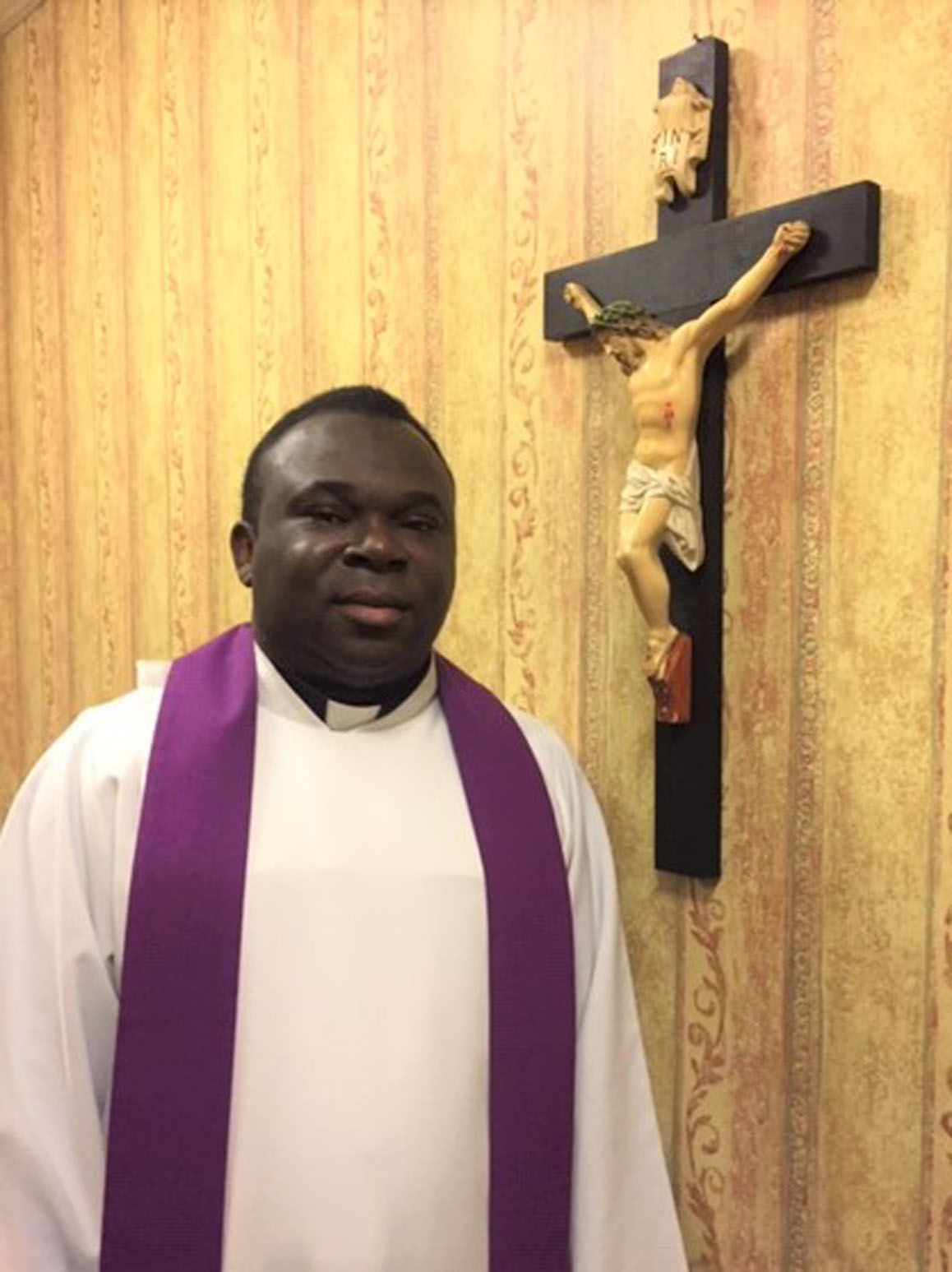 PRIEST — At St. Mary’s Catholic Church near Fairfield, Parochial Vicar Christopher Onyeneke reported on Saturday that the parish will continue Masses on the normal schedule unless directed by the Diocese of Harrisburg to make changes.

WORSHIP — At Lower Marsh Creek Presbyterian Church on Sunday morning, Pastor Mark Englund-Krieger invited parishioners to share concerns and suggestions for coping with the coronavirus pandemic. For now, the church plans to continue holding worship on its usual schedule.

PRIEST — At St. Mary’s Catholic Church near Fairfield, Parochial Vicar Christopher Onyeneke reported on Saturday that the parish will continue Masses on the normal schedule unless directed by the Diocese of Harrisburg to make changes.

Local congregations are all seeking how best to serve their members and communities amidst the coronavirus pandemic.

Many churches were closed this past weekend and urged members to worship virtually via sermons and prayers offered on the internet. Others announced their last services for at least a two-week period. Some have no plans to cancel worship but advise older members and persons with threatening health conditions to stay at home and pray.

On Saturday afternoon, Rev. Christopher Onyeneke, parochial vicar, was holding confessions at the normal time ahead of the 5 p.m. mass at St. Mary’s Catholic Church near Fairfield. He indicated the diocese has not cancelled services in its parishes, and the normal schedule of masses will continue until further notice.

Tim Pickett, a member at Fairfield’s Liberty Worship Center reported that the board decided to continue holding services. He said parish leaders are advising those over 70 and anyone with compromised health conditions to remain at home. Pickett said, “We felt it’s important that whoever needs to” could come together and worship.

“Social distancing is not isolation. With Christ as the source of our unity, we are called to reach out to one another in various practical ways,” Father Andrew St. Hilaire, parochial vicar, said during his homily.

At Trinity United Church of Christ in Gettysburg, Pastor Frederick Young announced on Sunday that the parish consistory or board will meet this week to determine whether or not services might be suspended.

Following advice of Bishop James Dunlop of the Lower Susquehanna Synod, both Gettysburg Lutheran churches cancelled all scheduled services this past weekend. Decisions about future Sundays will be announced in a timely fashion.

Eaton wrote to all 10,000 ELCA congregations, “Respect the disease. Do not take unnecessary risks. Provide for the spiritual and physical needs of the neighbor. Make use of medical aid. Care for one another, especially the most vulnerable.”

St. James lead pastor, Mike Allwein, reported to congregants that recorded sermons for Sunday and the midweek Lenten service would be available on the parish website (stjamesgettysburg.org).

Allwein’s letter to members said, “We are in unfamiliar territory at this time with this coronavirus, but we are also God’s beloved people sustained by the Living Water who is Jesus. That is who we are!”

The ELCA’s ecumenical spirit was reflected in Garden of Grace Community of Churches’ letter to members, encouraging them to tune in to the Washington National Cathedral’s broadcast Episcopal service.

Prince of Peace Episcopal held services as usual this past weekend but will follow Bishop Audrey Scanlan’s directive to suspend worship at least until Palm Sunday, April 5.

Lamenting that, “When we most need to be together, we must be kept apart,” Father Herbert Sprouse assured worshippers at the parish’s early service that the crisis affords opportunities “to open our hearts and discover other ways to experience grace.”

Also holding its last services for at least two weeks on Sunday was Gettysburg’s Foursquare Church, said Connections Director Chris Rotz, but the parish will livestream worship while closed. Usher Jim Thomas reported that Sunday’s 8 a.m. attendance of 124 was less than half the average of about 280.

At Gettysburg Presbyterian Church’s early service, Usher Jim Gardner counted 40 at worship, barely over half the typical 75. He said that no plans to cancel worship on future Sundays have been announced.

Lower Marsh Creek Presbyterian, which saw just a slight attendance decline Sunday, also plans to continue holding services unless there are new developments. During the announcement time, Pastor Mark Englund-Krieger invited members to share concerns and suggestions for coping amidst the coronavirus crisis.

Concerns were expressed for the most vulnerable, including children at home who depend on meals provided at school. Lower Marsh Creek has been hosting the Gettysburg CARES shelter the past two weeks, so concerns for the homeless were also uppermost in the minds of members.

In Englund-Krieger’s opening prayer, he prayed that the current crisis might “better connect us together” and look beyond our own borders “to become world citizens” concerned for God’s people everywhere.