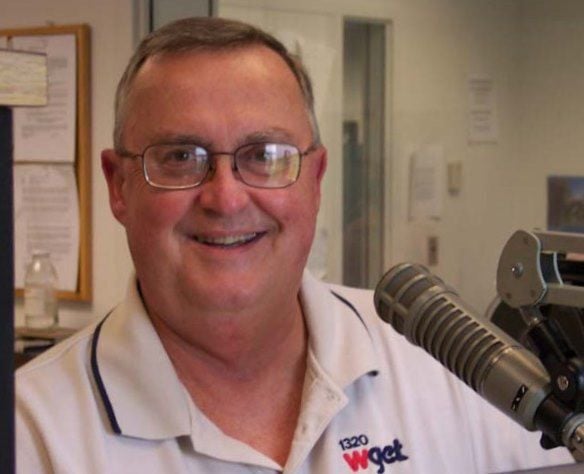 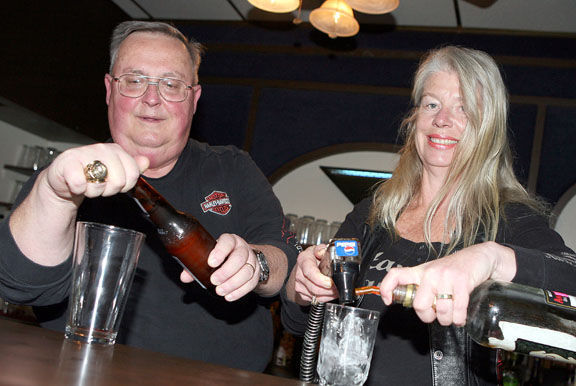 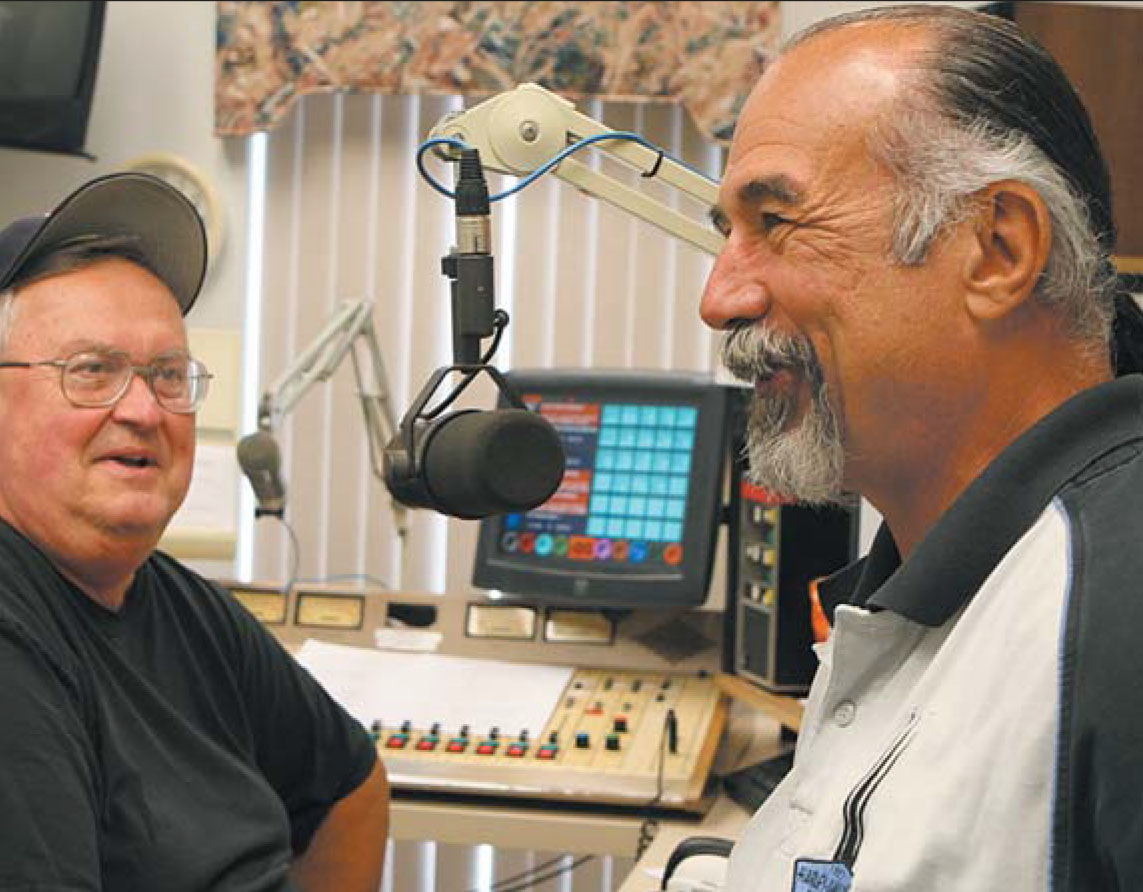 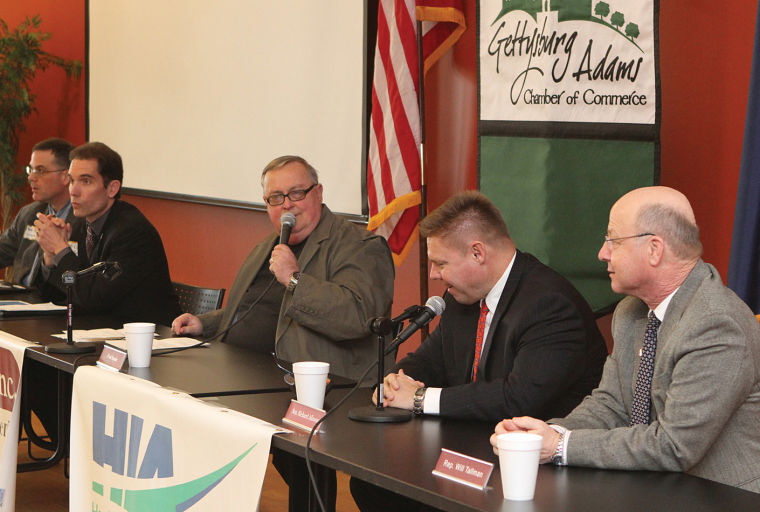 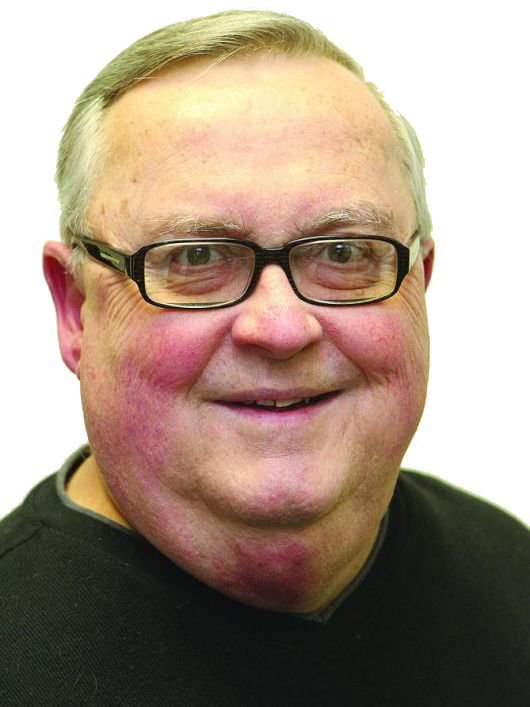 Snyder’s booming, unmistakable voice, was heard on the 1320 WGET morning show for 19 years. In addition to spinning tunes, he hosted “Freddie’s Breakfast Nook,” a 30-minute talk show that featured guests to discuss everything from local politics to the importance of a flu shot.

In 2012, Snyder stepped back from the mic and quickly found a new medium to connect with the community. “Around Town with Fred Snyder” was published in the Gettysburg Times every Tuesday for seven years. The column ceased earlier this year when the COVID-19 pandemic forced the newspaper to make cuts.

Snyder spent the bulk of his career in Adams County promoting the community he loved. Long before the days of on-demand listening via the Internet, Gettysburg residents who wanted to be in-the-know simultaneously turned their AM dial to 1320 weekdays at 8:30 a.m. to listen to “Freddie’s Breakfast Nook.”

“When I first started working here, I was driving up from Baltimore every day and during my commute, I would listen to Freddie,” Vickie Corbett, the recently-retired executive director of the United Way of Adams County, said. “He truly was the voice of Adams County.”

“I had the honor of being invited to be a guest on Fred’s early morning, live radio show many, many times and it was always a pleasure because he was such a gentleman, well-prepared and a good listener,” Gabel said. “And for days after the show wherever I went, folks would say, ‘I heard you on Fred Snyder’s radio show.’ Sadly, the era of local community radio which Fred loved so much has passed, and so has he. We’re all a little less connected as a result.”

Corbett often relied on Snyder to spread the word about events she was chairing. Holiday Family Outreach, an organization that provides families with meals and toys at Christmas, was one of his favorites. Pete Kuhns’ Christmas for Kids was another group that held a soft spot in Snyder’s heart. In addition to giving the group air time and later ink, Snyder would serve drinks as a celebrity bartender during fundraising concerts.

Snyder loved Christmas. The portly, often jolly, man with a booming voice shared many characteristics with Santa Claus. In 1987, while working in Springfield, Mass., he embraced the resemblance. Snyder attended Santa school and qualified to wear what he called “The Magic Suit.” He brought the persona to Gettysburg when he moved here in the early 1990s and spread joy to children at The Rotary Club of Gettysburg breakfasts, South Central Community Action Programs and YWCA daycares, and Saint Francis Xavier Catholic School.

“One of the most enjoyable times was visiting my grandchildren as Santa, and them not realizing it was Pop-Pop. It was a very special time in my life and I was honored to have had the opportunity to make so many children happy,” Snyder wrote in 2013. “For those who ever choose to assume that role, show respect for the image you represent, and know there is something very special about ‘The Magic Suit.’”

On Dec. 31 for many years, Snyder would appear on Gettysburg’s Lincoln Square as himself to help the town countdown to the New Year.

In the mid-2000s, “Freddie’s Breakfast Nook” began delving into local news topics. Adams County commissioners and Gettysburg Borough Council members regularly appeared on Snyder’s show, and he earned a reputation for not being afraid to ask hard questions live on air.

“He was a great guy. Fred grilled me many times on his show. Tough but fair, as they say,” Gettysburg Mayor Ted Streeter, who served as borough council president during the time of Snyder’s radio show, said. “An island of honesty in a sea of madness. I’ll miss him.”

On Dec. 20, 2012, Snyder decided to step away from his radio show. Without giving management prior notice, he announced live on-air the day’s show would be his last. He thanked his listeners and sponsors and promised he would catch up with them “down the road.”

When he said “down the road,” Snyder had no idea it would be only four months later, this time in newsprint. Times and News Publishing Company, which owned WGET/WGTY and the Gettysburg Times, had sold the newspaper to Sample News Group so Snyder saw the newspaper’s separation from his former employer as an opportunity to reinvent himself. He pitched the idea of a weekly column to the paper’s new editor and “Around Town with Fred Snyder” premiered March 5, 2013.

“Is it opinionated? Yes,” Snyder said in a 2014 interview for Companion magazine. “But it’s me doing my shtick. The biggest comments I get are that ‘you say what a lot of us would like to say but are too afraid or can’t say it.’ I’m at the point in my life that if I see wrongs, I’ll point them out. I was very happy to get this opportunity.”

In print, Snyder was not as universally loved as he was on air. His often controversial stances on local and national affairs prompted many letters to the editor or angry phone calls to the newsroom. The edgier Snyder often took his “shtick” online and engaged in heated debates with people on his personal Facebook page. He prided himself in being a registered Independent, but many of his opinions tilted to the right side of the political arena. Many who knew Snyder for years and disagreed with him strongly still appreciated the kind heart that existed beneath the hard exterior.

“One of the most surprising and gratifying things that has happened to me in Gettysburg is going from sparring partners with Fred on social media and in the paper to breakfast friends who also exchanged a good phone catch-up from time to time — figuring out how to disagree without being disagreeable,” Charles Strauss, a Democrat who served on Gettysburg Borough Council, said.

Snyder was born in Baltimore and was proud of his Maryland roots. He attended Calvert Hall High School and later University of Maryland, College Park, where he majored in English. His career in broadcasting got off to a bumpy start but eventually he landed gigs up and down the dial at several Baltimore stations.

“What I’ll miss most about Fred are his calls for comments during my commutes home in the evenings,” former Borough Council President Robert Krummerich said. “We’d cover the borough for about 10 minutes and then start geezing about Baltimore or arguing politics until I pulled into the driveway 30 minutes later. Fred and I had been altar boys in neighboring blue-collar Baltimore parishes and developed similar senses of humor. He went to the local radio station and I wrote for the News American, so we knew or covered many of the same people.”

Snyder later worked in Massachusettes. When his father died in 1989, he and his wife at the time, Susan, moved to southcentral Pennsylvania so they could be near his mother, who was living in West Manheim Township, York County. He installed cable before landing a job at WHP in Harrisburg. The daily commute wore on him so he approached the WGET station manager about a job in Gettysburg. The next day, he was hired to be the station’s morning disc jockey.

Snyder leaves behind his wife of 20 years, Betty. The couple resided in Carroll Valley.