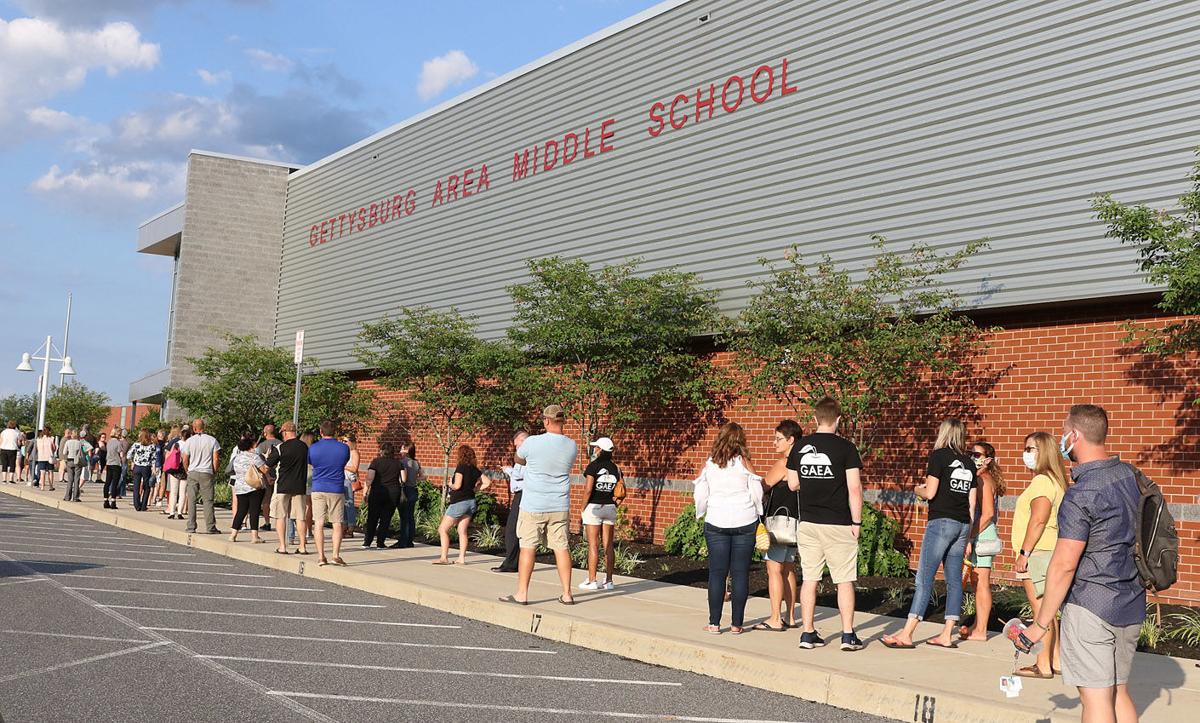 A long line of people waiting to enter the Gettysburg Middle School on Monday delayed the start of the school board’s meeting. 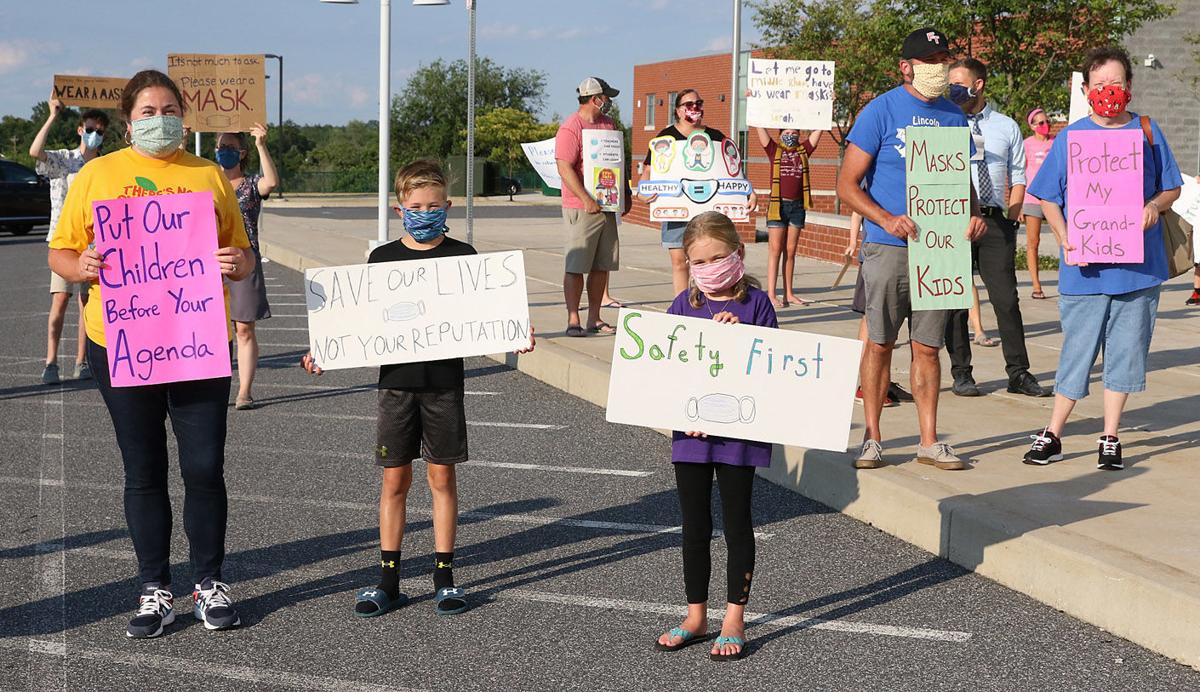 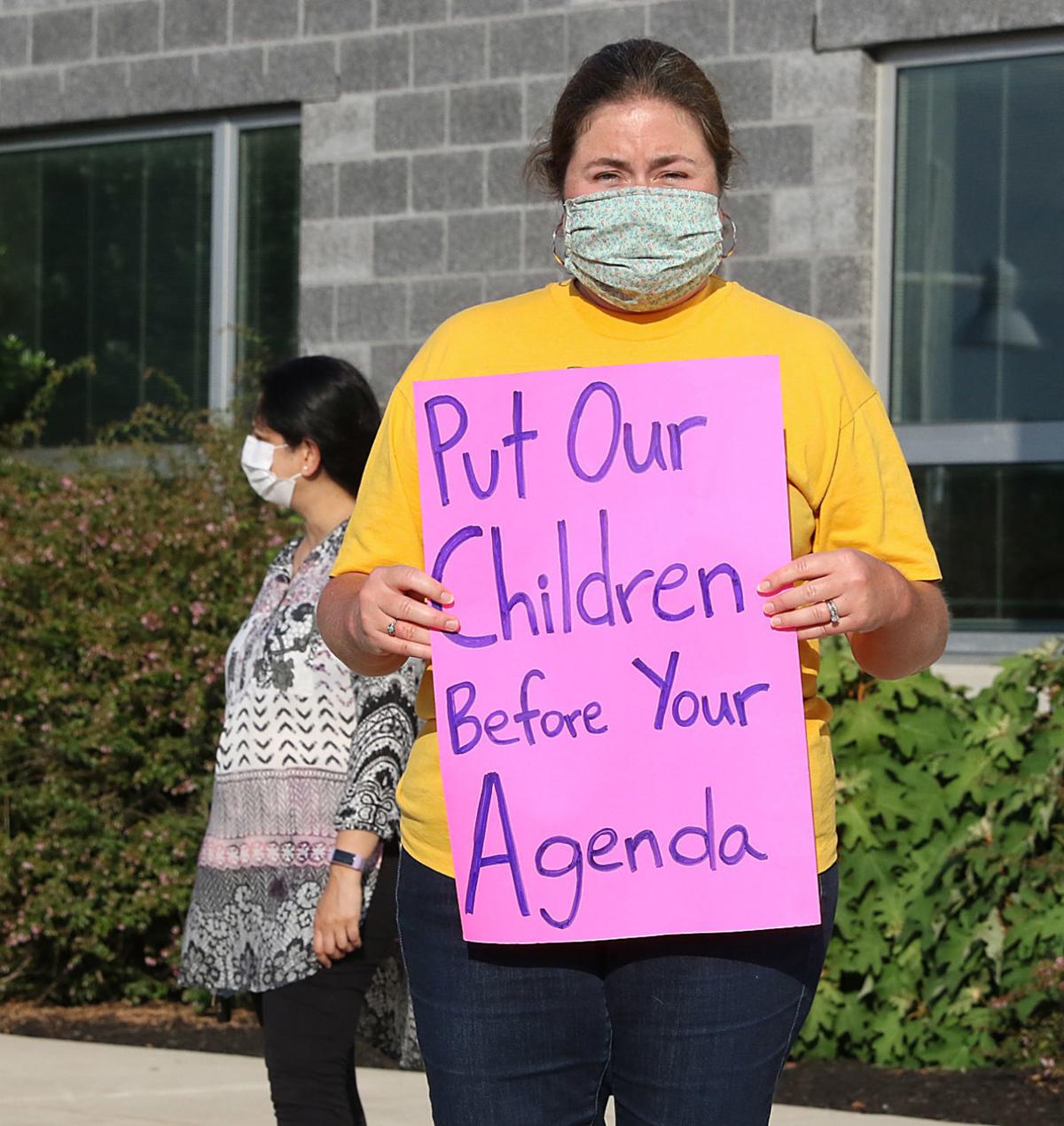 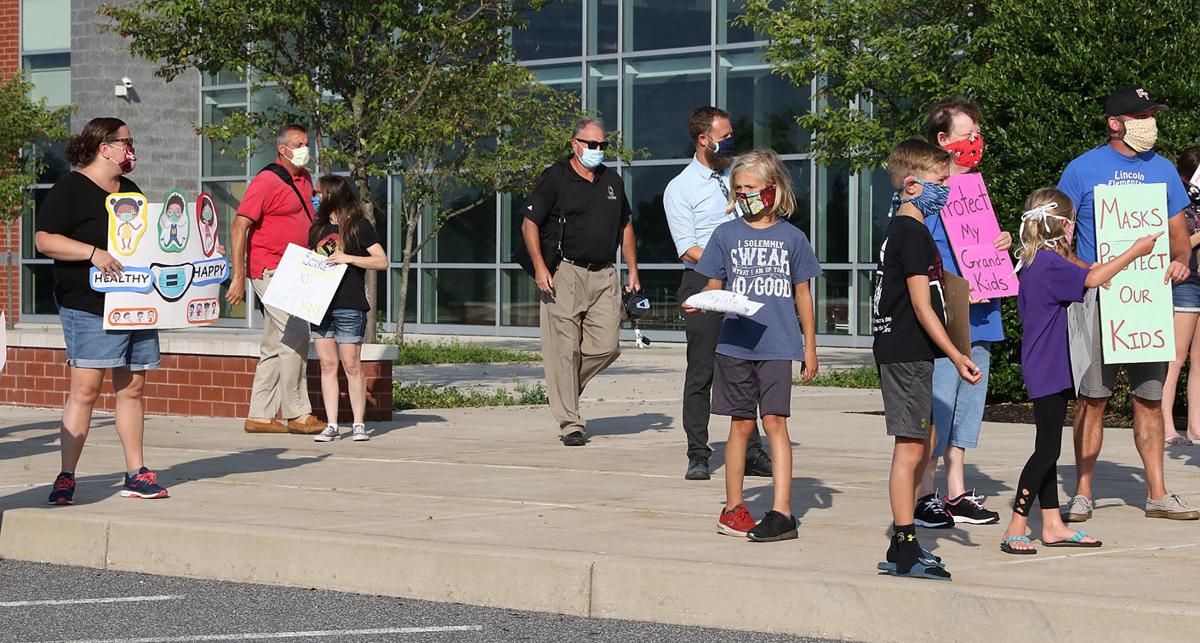 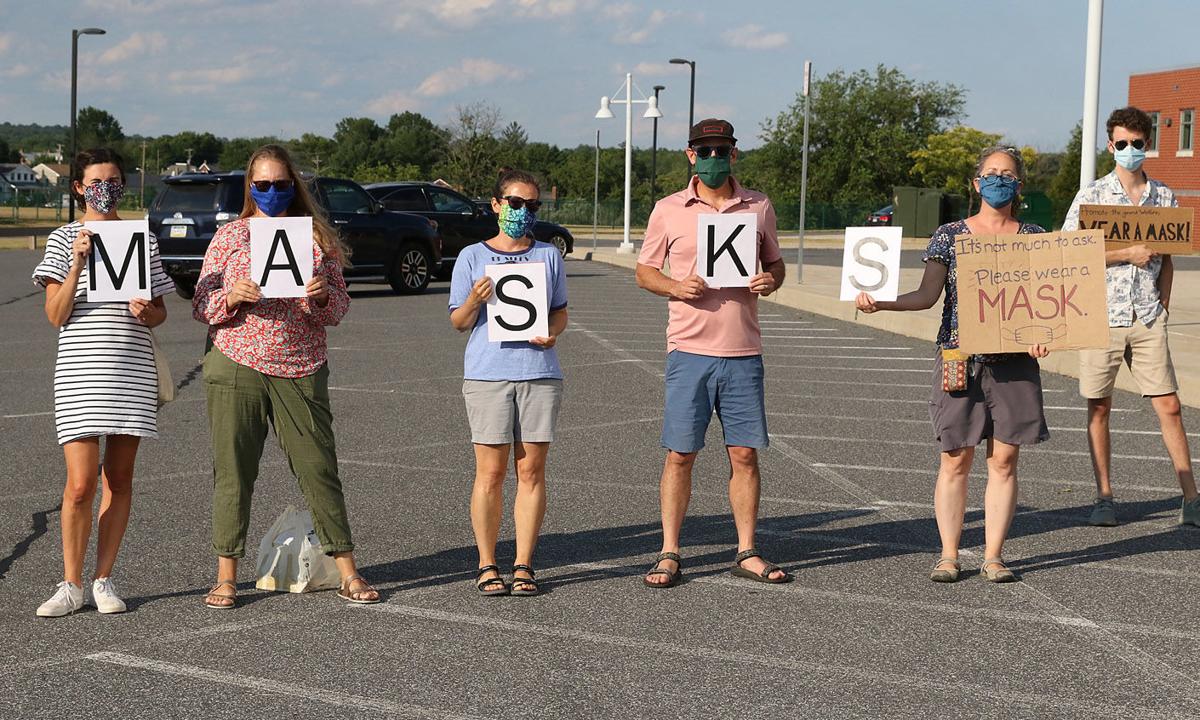 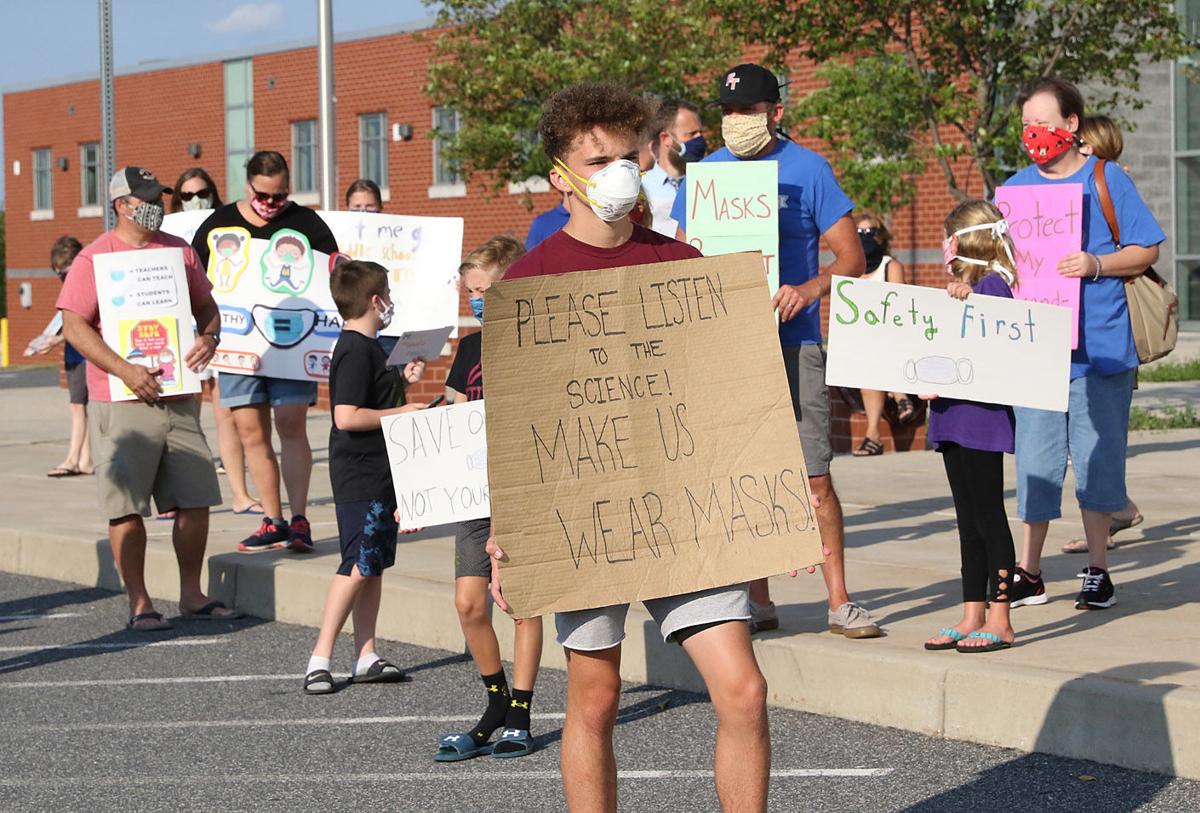 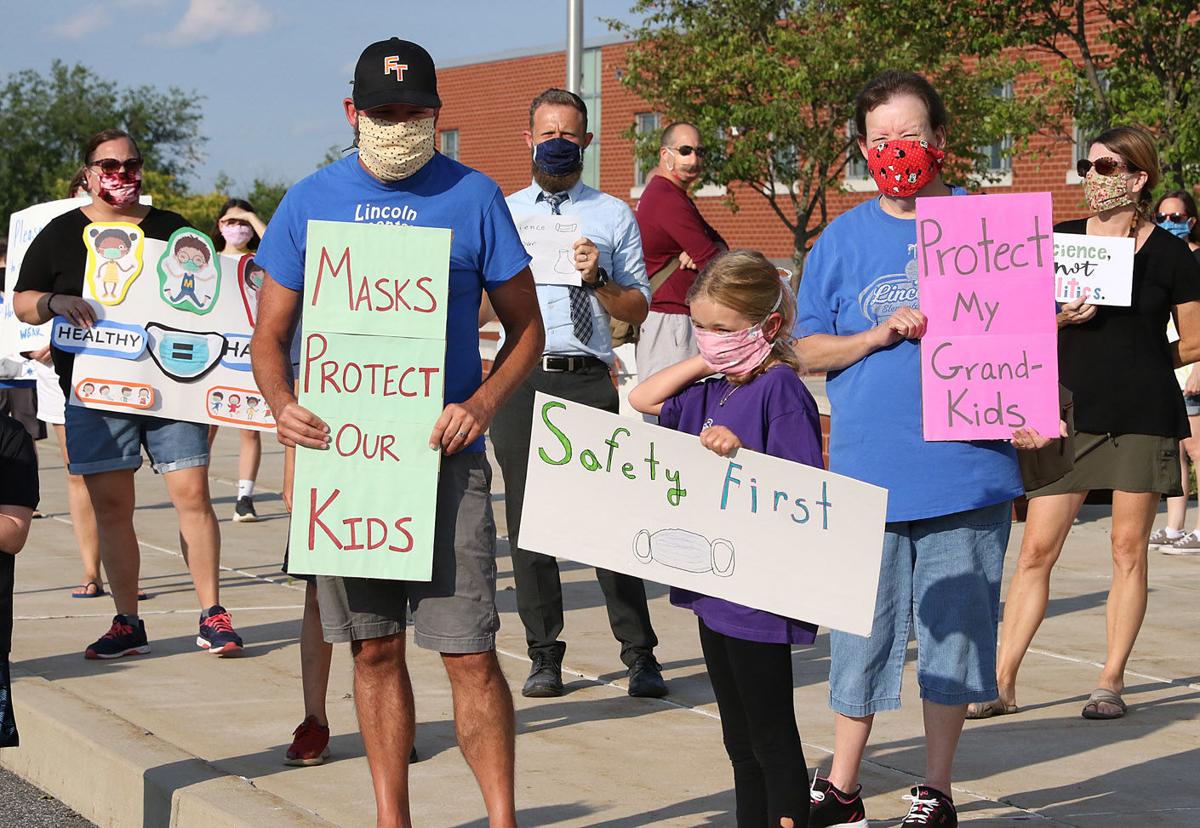 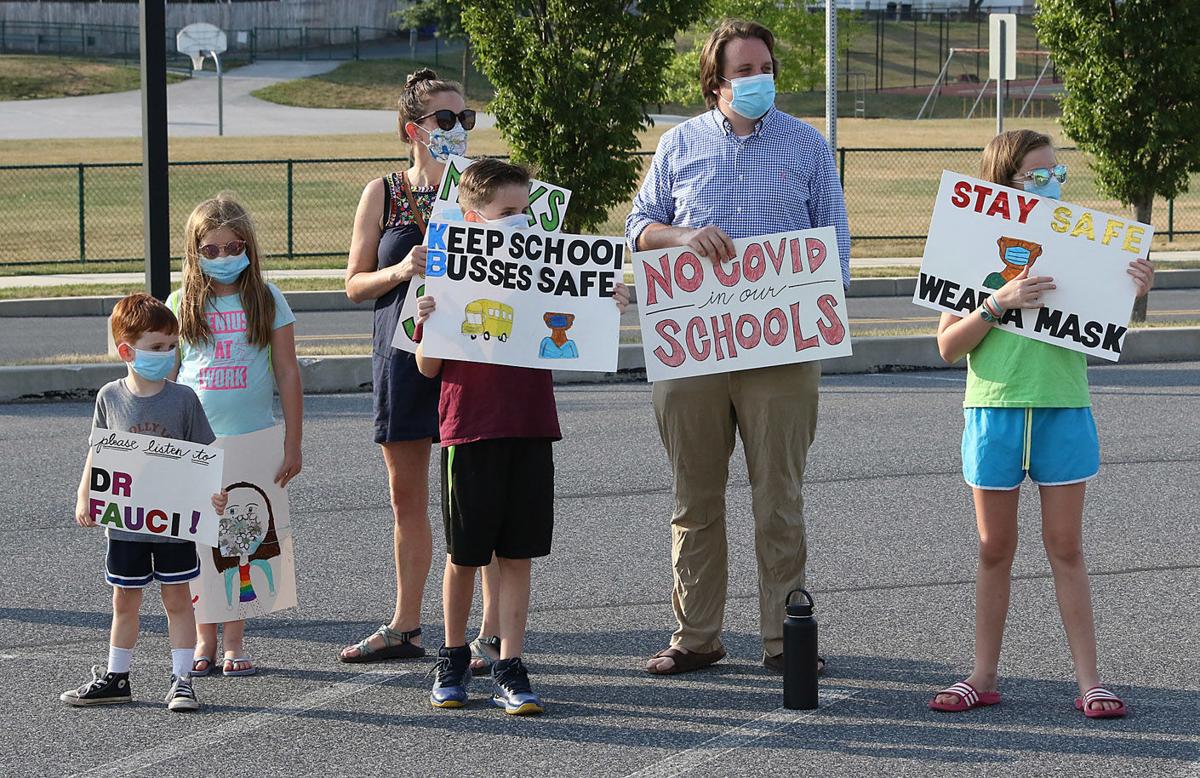 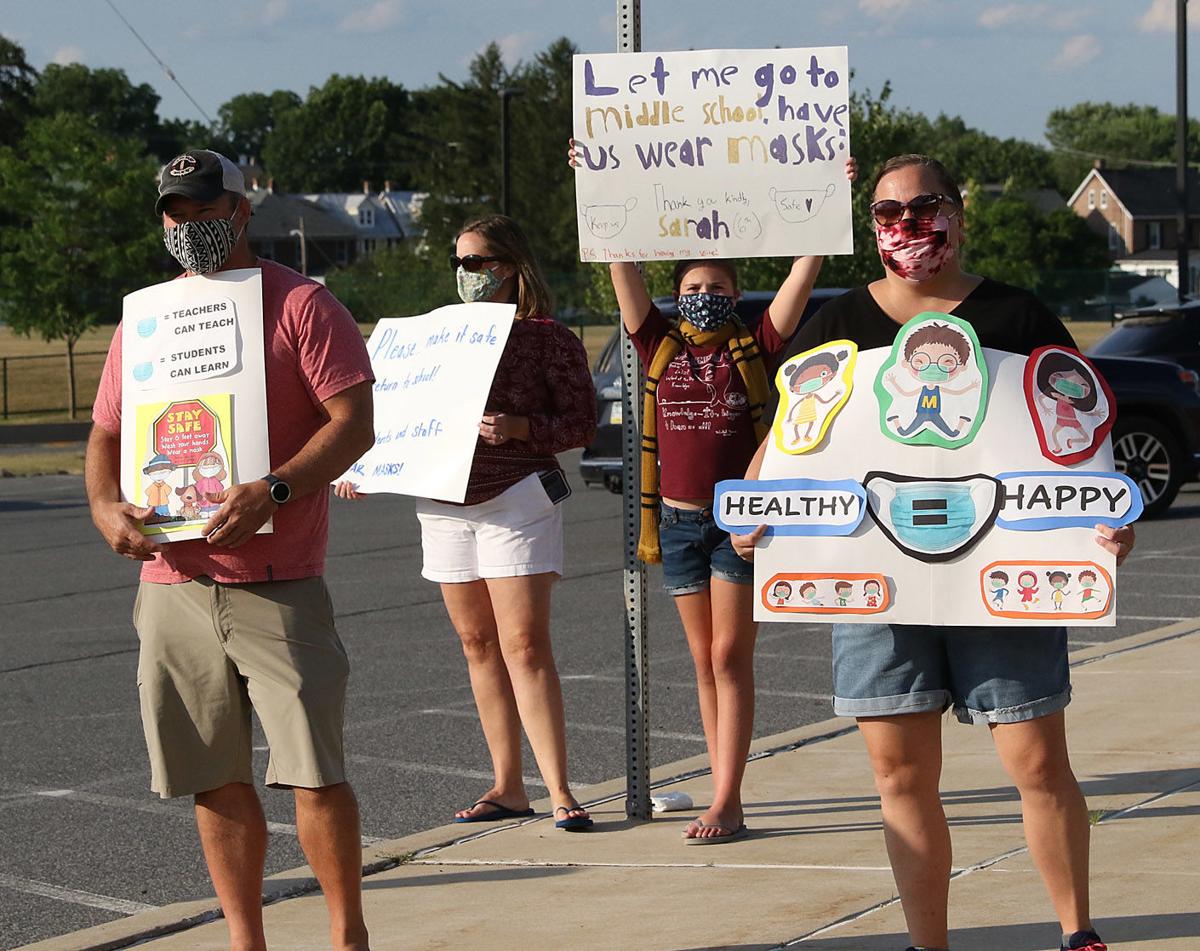 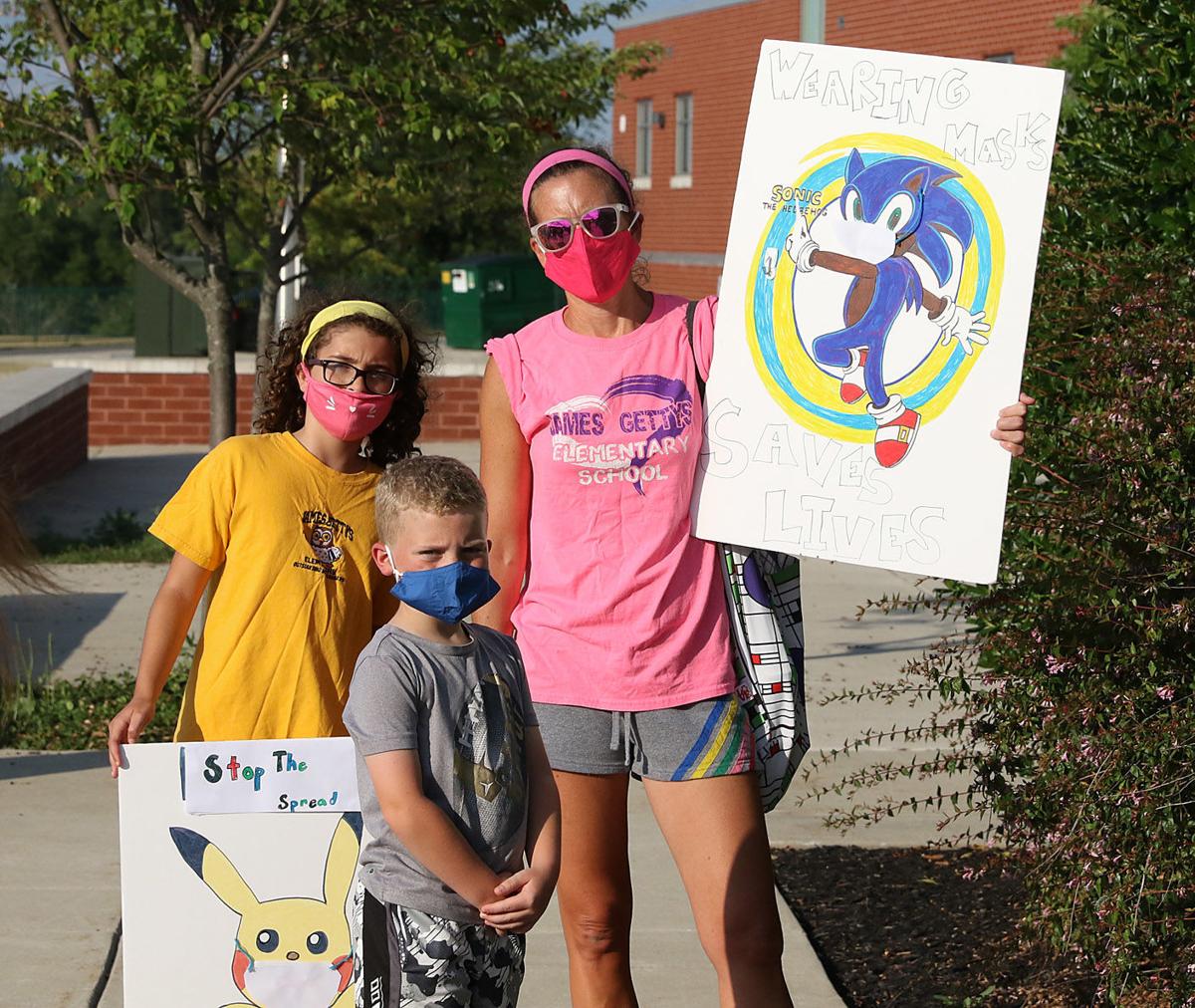 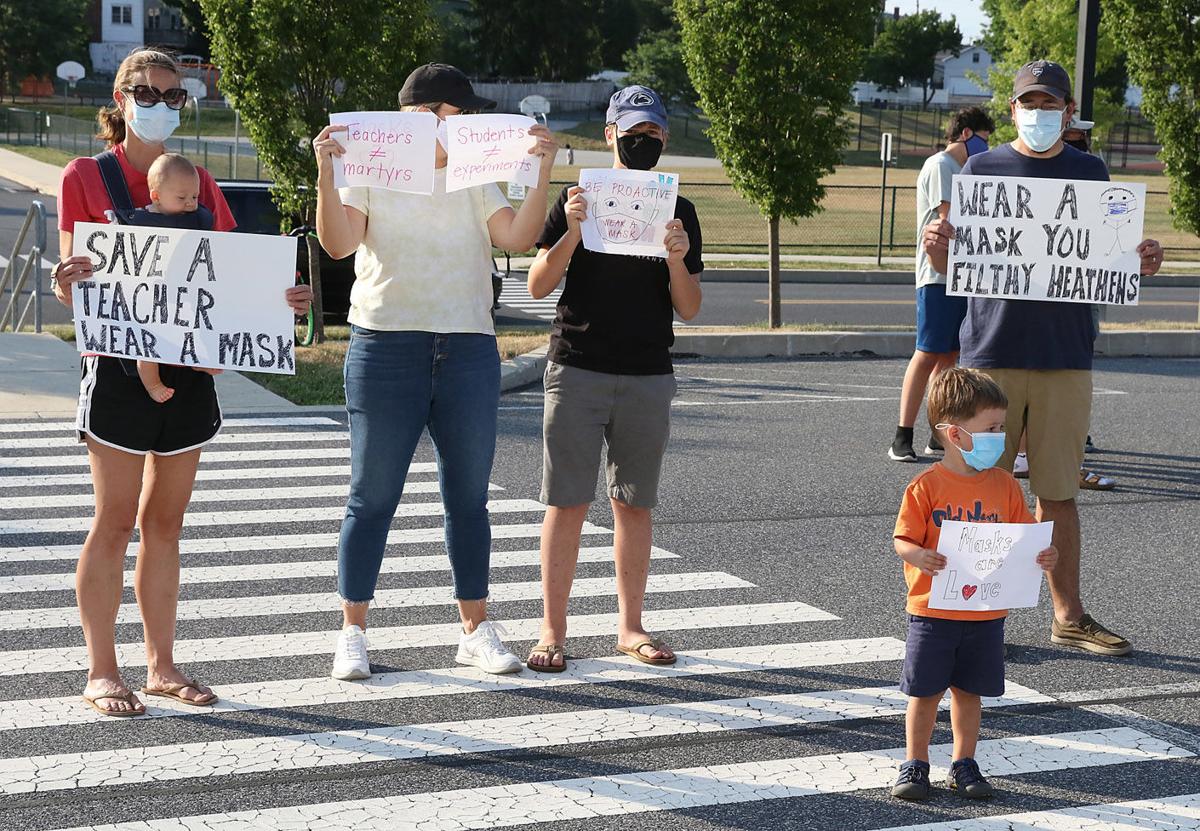 A long line of people waiting to enter the Gettysburg Middle School on Monday delayed the start of the school board’s meeting.

Dozens of people gathered in the Gettysburg Middle School Auditorium Monday to learn how the district plans to reopen schools during the COVID-19 pandemic. Many came in response to a Facebook post made by board member AmyBeth Hodges who urged people to express opposition to mask-wearing in schools.

Dr. Jason Perrin, superintendent, told the board about 27 people worked on the administrative reopening proposal.

“We want to reopen as responsibly as we can so we can stay open,” Perrin said.

Perrin’s plan calls for students in kindergarten through sixth grade to attend classes in-person every day. Students in seventh through 12th grades would attend in-person on rotating days, Perrin said. This would require the district to move the start date from Aug. 19 to Aug. 24, Perrin said.

Students who use district transportation will be required to wear masks, Perrin said. Masks will also be required when entering and exiting buildings and when it is not possible to practice social distancing, Perrin said. The plan does not require masks when sitting at a desk, at recess, or in a physical education system.

Perrin acknowledged the difficulty of creating the plan.

“There really is no plan that we are going to come up with that is going to make everybody happy,” Perrin said.

The plan will be posted on the district website this week with a survey seeking feedback. The district will then form focus groups to gather more feedback, Perrin said.

Twenty-seven people wished to address the board Monday night, school board President Kenny Hassinger said. Hassinger cited district policy which limits comments to three minutes per person for a maximum of 30 minutes so not everyone who wanted to speak had the opportunity.

Gina Azzara, an employee of Lincoln Intermediate Unit, said she has worked within Gettysburg Area School District for 14 years. Azzara said she is concerned about how students will respond to pandemic-related rules.

“It is a constant battle for them (preschoolers) not to be touching each other,” she said. “If you have been in the high school, it is the same battle for completely different reasons.”

Azzara also asked what will happen if a student refuses to wear a mask or wears it incorrectly.

Susan Willard, a local daycare employee, said she has been working with children since her center reopened in May. Willard said children wear masks and practice social distancing if adults set good examples.

“I think every parent wants their child back in school,” Williard said. “We need to listen to the experts, we need to heed their advice.”

“What I would be afraid of is if we don’t have consistent use of masks as science indicates?” Florek said.

Dr. Dwight Michael, a family physician, said he is distressed by how political mask-wearing has become. He also said laws change, and cited seat belt, DUI and helmet laws.

“They are all laws. They all protect the public,” Michael said.

Andy Heaton suggested the district start with a cautious approach and loosen reins as conditions permit. Heaton told the board they must be concerned about spreading the virus around the community.

Katie Parise told the board masks are not necessary when social distancing is being practiced.

“There is a point in here when we can say we are doing ‘good enough,’” Parise said. “I think it is very important as we go through this process that we think about realism.”

Michelle Light told the district she wishes the district’s decision date was sooner than Aug. 3.

“You basically tied our hands on the planning,” Light said.

She also said she worries about bullying amongst children over the mask issue.

“I also know I have a responsibility as an adult to protect these children,” Deloe said. “Please, let’s compromise so we can do the best thing for our children.”

Sarah Keefer told the board she worries about how children will react to wearing masks, not being able to hug their teachers or sit near their friends at lunch.

Colton Hewitt, a fifth grade student at Franklin Township Elementary School, told the board his parents taught him to “stand up for right and wrong.”

“I am not looking forward to going back to school in the fall due to the state mandate of wearing a mask in the classroom and other parts of the school,” Hewitt said. “If I had to wear a mask into school, it would be very depressing.”

Jeremy Light thanked Hodges for posting about the meeting on Facebook and said he believes wearing masks in school should be a parent’s choice.

“You have no good scientific data and to stand here and spoon-feed me a bunch of s- — is absolutely ridiculous,” Davis said.

Evan Kahn, a rising sophomore, said “face coverings are required in any indoor locations where members of the public are generally permitted.”

“I believe that this debate is, quite frankly, a waste of everyone’s time,” Kahn said.

Hassinger told the board and administration he wants the focus groups to be very diverse and stressed a high number of students are on free and reduced lunch so reopening plans and possible forced closures affect families differently.

“We have socio-economic differences in our community,” Hassinger said. “I would ask that to the best of our ability that you make those committees diverse.”

“It is paramount that the union is represented. Our decision affects their day-to-day life,” Hassinger said.

Board member Sylvan Hershey said “just because you have the right to do something doesn’t mean it’s the right thing to do.”

Carrie Soliday praised administrators for the “weight of responsibility” the pandemic has placed on them.

Kathleen Pratt said politics must be kept out of any decision-making process.

“When we discuss the best way to get our kids back to school, we cannot do it from the lens of an elephant or a donkey,” Pratt said. “Conservative agenda, liberal agenda, folks I do not have time for a real or imaginative agenda.”

Perrin’s plan and a survey will be sent to district families this week. The administration will then establish focus groups to help form a final draft of a plan the board will vote on Aug. 3. Comments can also be shared with the board by emailing board@gasd-pa.org.

Hello, I'm not sure if this was a typo or something else, but you misquoted what I discussed last night at the meeting. While I do thank Amy Beth Hodges for posting about the meeting and agree that masks should be ultimately a parental decision, those were things said by the gentleman that spoke after I did. I’ll note that there was an individual who displayed extreme rudeness towards Hodges for posting about the meeting. It was very disrespectful and had no place with the otherwise civil discourse going on last night.

In my 3 minutes of time that was allotted, I questioned the non-existent science that has been referenced by so many as the justification for the lockdowns, masks, and social distancing. I mentioned that slowing the spread never meant that there would be less cases, it only meant that they would be spread out over a longer period of time. I referenced the article that Dr. Anthony Fauci put forth in the New England Journal of Medicine, where he stated that the Covid mortality rate may be considerably less than 1%. This was published in February right before the lockdowns and school closures began. https://www.medscape.com/viewarticle/926089

It turns out he was right based off all the testing that has been done, the mortality rate is actually close to the seasonal flu’s mortality rate estimated by the CDC at 0.26%. When have we ever taken these types of measures for the seasonal flu? Would it ever have crossed your mind in years past to do so? https://www.breitbart.com/politics/2020/05/27/cdc-suggests-coronavirus-fatality-rate-higher-than-flus-but-at-least-8x-lower-than-initial-estimates/

I also spoke about the fact that there is no evidence of asymptomatic spread even occurring. I cited that the original study that asymptomatic spread was hyped off of was later found to be faulty. This study was the CDC’s the original catalyst for lockdowns, mask wearing, and social distancing policies. The one person that was referenced in this study was from China and they were actually found to have been symptomatic later. The people that put out the study didn’t interview her to confirm before making the study public. https://www.statnews.com/2020/02/04/high-profile-report-on-asymptomatic-spread-of-coronavirus-based-on-faulty-information-health-officials-say/

I cited that a month ago the World Health Organization held a press conference stating that they had no data to show asymptomatic spread was occurring. They tried to deflect from those comments the next day after the alarm bells it raised, as that would mean all the social distancing guidelines and mask wearing policies are needless. Of course, they are supposed to be the most knowledgeable world authority on health information, but they just mistakenly misspoke that day? https://www.youtube.com/watch?v=GJRyhgZYaiI

I think what they stated was very clear and shows that these policies are not warranted. They should not have a in place in our society or in our impressionable children’s schools where this will serve no purpose but to traumatize them. You could have mentioned any one of these items that I brought up in your article, but instead I was misquoted.