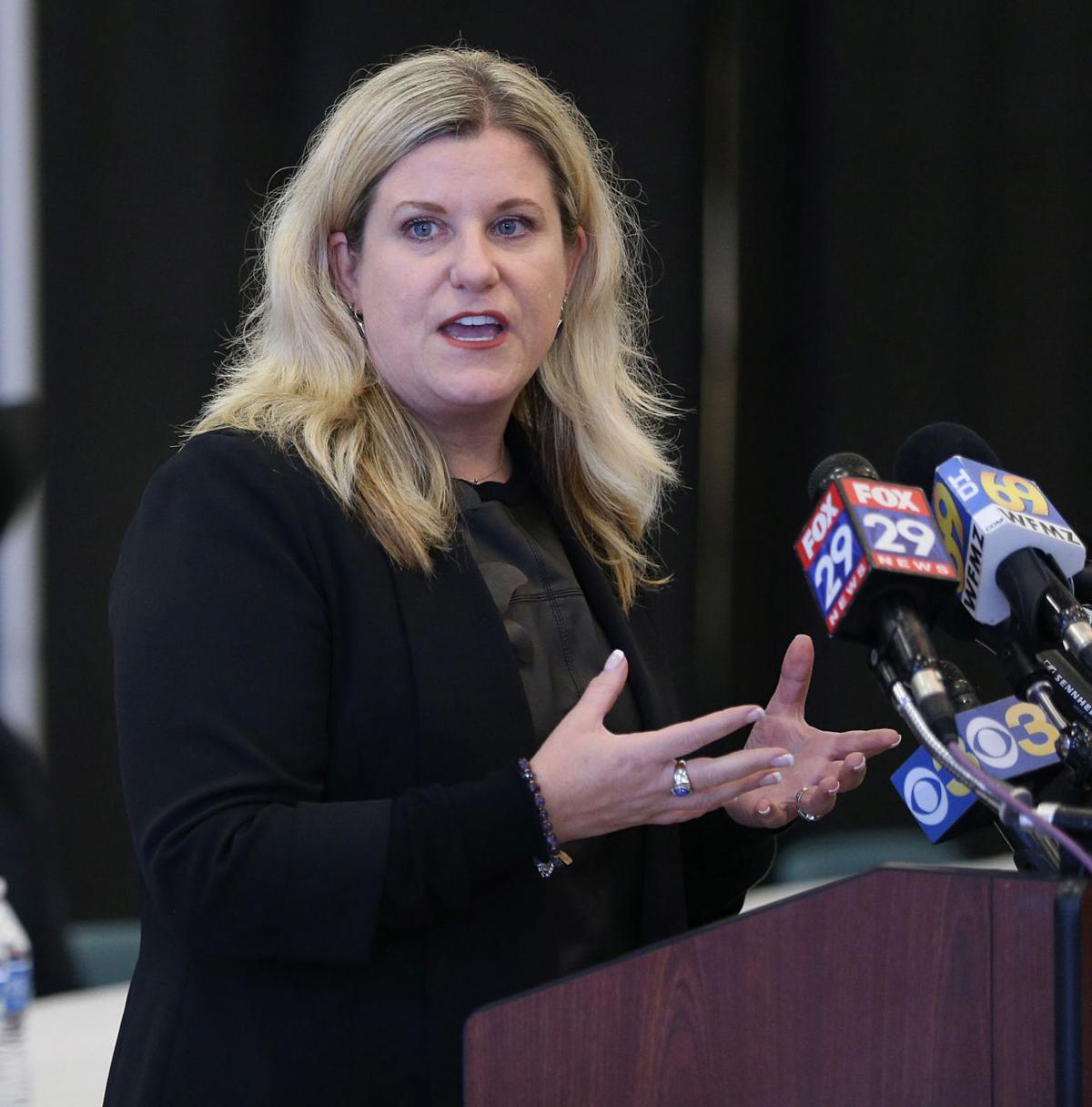 Jennifer Storm for months has been in the crosshairs of the GOP, in part, because of her outspokenness in high-profile cases involving victims of sexual abuse.

Jennifer Storm for months has been in the crosshairs of the GOP, in part, because of her outspokenness in high-profile cases involving victims of sexual abuse.

HARRISBURG — Fresh off sweeping victories in the election, the Republican-controlled Senate on Monday blocked state Victim Advocate Jennifer Storm from serving another six years in the job, a stinging rebuke to Democratic Gov. Tom Wolf’s choice to run the office that advocates for victims of crime.

The 32-18 vote — including nearly every Republican and five Democrats — came after eleventh-hour attempts by Democrats to stop a vote on Storm, who for months has been in the crosshairs of the GOP, in part, because of her outspokenness in high-profile cases involving victims of sexual abuse.

As word spread Monday that GOP senators had enough votes to block Storm, Wolf recalled her nomination. But Republicans, in a rarely used move, voted down the recall and blocked a separate attempt by Senate Minority Leader Jay Costa (D., Allegheny) to postpone a decision.

In voting down Storm, several Republicans said they believed the job should be held by a licensed lawyer, which Storm is not — although Storm and her supporters have countered that the victim advocate is not allowed to provide legal advice.

A handful of Democrats who opposed her nomination said Storm had failed to advocate for victims in communities of color hard-hit by gun violence, focusing her attention instead on sexual abuse survivors.

A spokesperson for Wolf, Lyndsay Kensinger, said in a statement the governor “is very disappointed that the Senate voted this nomination down without even the benefit of a hearing to consider her qualifications.”

In an interview Monday night, Storm defended her record as a passionate advocate for all victims, a role that she said has placed her on a collision course with some of the state’s most powerful elected officials.

She characterized the Senate’s vote Monday as “a political hit job” masterminded by the Senate’s top Republican, Joe Scarnati (R., Jefferson), who she said has refused to meet with her in the months leading up to the vote.

Storm believes the top Republican has been out for her job because of her outspokenness after the state Office of the Attorney General released a scathing grand jury report in 2018 that revealed a decades-long coverup of child sexual abuse in nearly every Roman Catholic diocese in Pennsylvania.

At the time, Storm and other advocates blasted the unwillingness of Senate Republicans, led by Scarnati, to approve a two-year window for lawsuits by victims of abuse who could no longer seek recourse under the statute of limitations.

Storm also was critical of Scarnati after it was revealed that his office had agreed to pay the legal bills of the Senate’s onetime security chief who had been accused of sexual harassment by his deputy — a woman the Senate fired after she sued for sexual harrassment.

“He is a political hitman,” Storm said of Scarnati. “I am so scared of what this means for this position. … It sends a message to victim advocates: ‘Watch your step. Stay in line. Don’t report it all. Don’t hold people in positions of power accountable or you will face the consequences.’”

Scarnati did not respond to a request for an interview Monday.

In floor remarks earlier in the day, Scarnati did not discuss Storm’s record. Instead, to the surprise of some colleagues, he revealed that Storm was under investigation by the State Ethics Commission — although he gave no detail about what the investigation entailed, nor how he learned about it.

His spokesperson, Kate Flessner, would say only that Scarnati was authorized “by the individual who filed the complaint to disclose only that publicly.” Flessner did not respond to questions about why or how Scarnati was contacted by that person.

State ethics officials could not be reached for comment Monday. As a rule, they do not confirm or deny active inquiries into alleged ethical violations.

Asked about the ethics investigation, Storm confirmed that she was informed about it in the spring. At its core, she said, the complaint alleges that she took money from lobbyists to advocate for Marsy’s Law, a constitutional amendment to establish a bill of rights for crime victims that’s currently tied up in litigation.

She said she never accepted money for her work.

“No one needed to pay me a dime to do that, it was my seminal agenda,” she said of the measure.

Some of Storm’s opponents have said privately they believe she has blurred the lines between her public work and her private endeavors, which include writing books, traveling for speaking engagements, and filming a documentary.

Storm previously told Spotlight PA she was already an author and speaker when she took the position in 2011, and said she has taken pains to keep her government job and other professional endeavors separate.

Few dispute that in her six years as the victim advocate, Storm has elevated the office’s profile. That is, in part, because she has been outspoken about her personal experience: She was raped as a child and subsequently descended into substance use and self-harm. She has spoken openly about her recovery and has documented it in a series of memoirs over the last decade.

She has said that her past propelled her into wanting to help others overcome traumatic experiences, and push for victim-focused policies and laws.

Over the last six years, that has placed Storm in the middle of some of the state’s most highly charged cases. Aside from the Catholic Church scandal, Storm has waded into the child sexual abuse scandals involving Pennsylvania State University and the #MeToo allegations that surfaced in the Capitol starting in late 2017 against former legislators and legislative employees.

Monday’s vote to reject Storm’s renomination was among the first the chamber took since returning to the Capitol following the Nov. 3 election, when Republicans fended off a fierce effort by Democrats to chip away at the GOP majority.

100% ESSENTIAL: Spotlight PA relies on funding from foundations and readers like you who are committed to accountability journalism that gets results. Give now and your contribution will be TRIPLED, spotlightpa.org/donate.