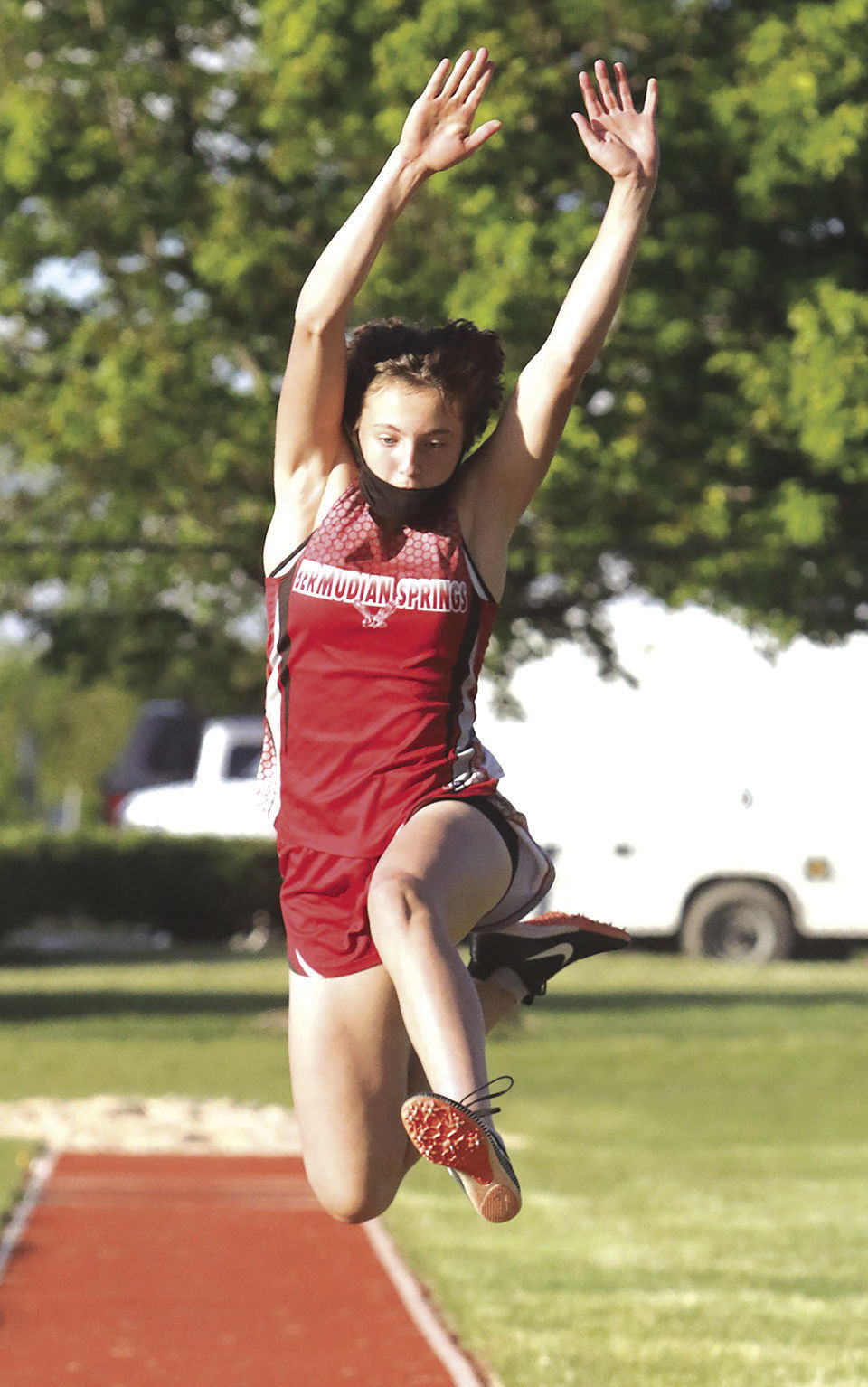 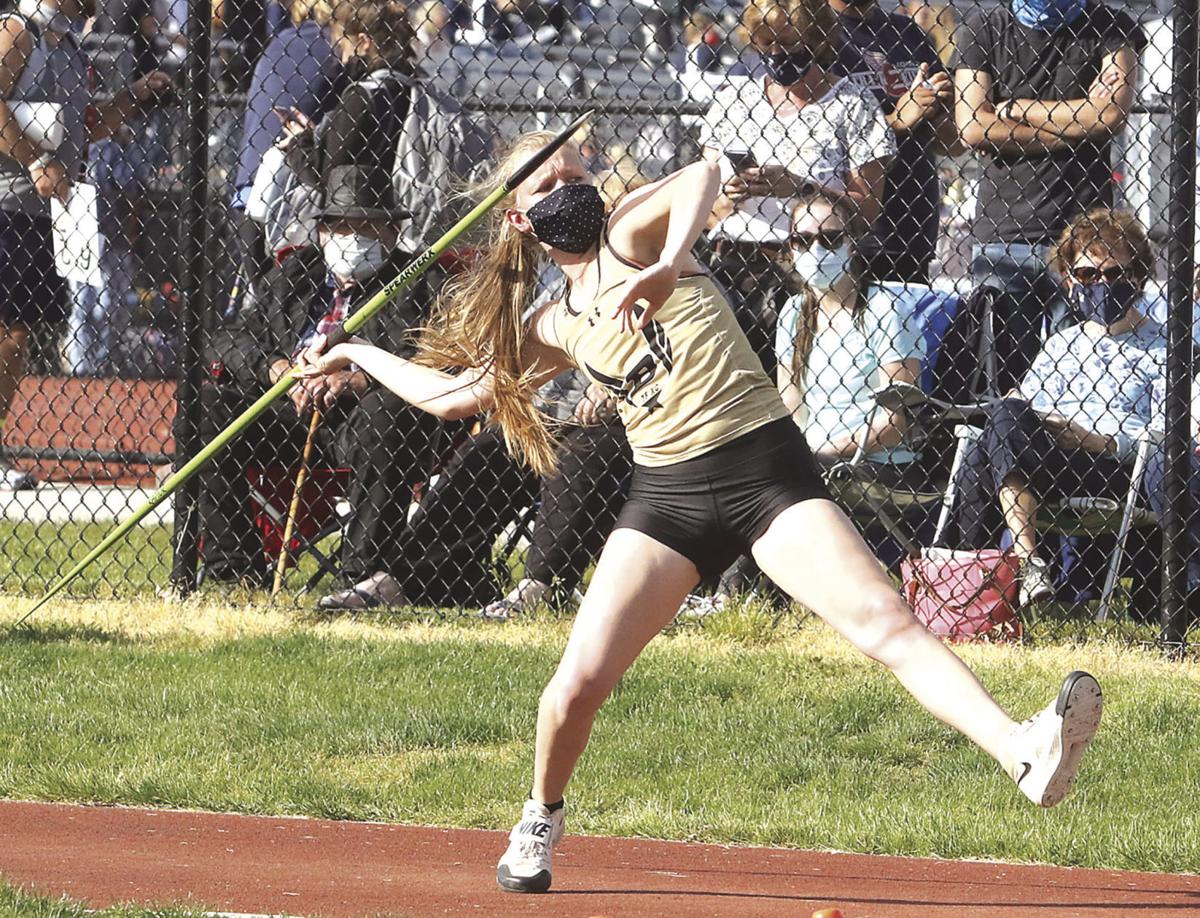 GOLDEN THROW — Biglerville senior Kenzie White prepares to throw the javelin during the YAIAA Track and Field Championships on Wednesday at New Oxford. White won the event with a throw of 118-7.

GOLDEN THROW — Biglerville senior Kenzie White prepares to throw the javelin during the YAIAA Track and Field Championships on Wednesday at New Oxford. White won the event with a throw of 118-7.

The first thing on the mind of Gettysburg sophomore Alivia Colgan in her 300 hurdles final at the YAIAA Track and Field Championships at New Oxford was to remain upright.

“The last time I ran against (York Suburban’s Olivia Kay) I actually fell,” she said. “So that was definitely something that I was thinking about, just trying to stay on my feet.”

Not only did Colgan, who is in her first year of high school track and field, stay upright, she bested the top-seeded Kay with a time of 47.51 to take home the gold.

“It’s pretty exciting,” Colgan said of Wednesday’s win. “It feels like it’s forever. Crossing the finish line I think I really kicked the last 50 meters which got me the win, but I think I could improve.”

Colgan was just one of several Times Area athletes to take home gold in a day that featured finals in each of the girls’ field events, as well as the 3200 and 300 hurdles for both boys and girls.

In what many would consider an upset, it was Bermudian Springs’ Alison Watts took home gold in the triple jump ahead of South Western’s Zaiyah Marshall. Marshall came in as the top seed with a distance of 38-0.5, more than nine inches ahead of Watts’ seed distance.

It was Watts, however, who delivered in the finals. The Eagles’ freshman, who earlier in the season broke the school record previously held by her aunt, Krystal Baker, posted a winning jump of 36-10.5, with Marshall in second at 36-6.25.

While she fell short of that goal, she did leave a YAIAA champ. So too did Marshall, who grabbed the top spot ahead of Watts in the long jump. Marshall’s jump of 17-4.25 paced the field ahead of Watts at 16-9.25.

Despite the victory, Marshall fell short of her seed distance of 18-1 and says the best is yet to come from her at the district — and potentially state — meet.

“When I was jumping, my foot wasn’t actually even on. I had to work up to getting my foot on the board to actually jump the 17,” she said. “I wanted to get 18 today but I didn’t. I want to make my school record way farther so people won’t get it and my name will stay on the board.”

Marshall said her record is north of 18 feet and she’s aiming to break the 19-foot barrier.

The Mustangs crowned multiple champs on day one as Maddie Lehker joined Marshall on the top step with a victory in the high jump, leaping 5-4.75 to demolish the rest of the field. Lehker’s jump also cleared her seed height of 5-3, which was the best of the bunch.

“It’s just a tone that’s been set at our school,” Lehker said of success throughout South Western’s program. “Our coaches, coach (Bruce) Lee and our assistant coaches, they’ve just set a tone and we go with it, every single person.”

In the javelin, Kenzie White made sure that Biglerville joined the party at the top of the podium. The senior, who entered as the top seed and the school record holder at 123-10, recorded a throw of 118-7 to top the field ahead of New Oxford’s Shaely Stabler at 113-5.

“The past few meets I haven’t been performing as well and last time I got second in this meet,” White said of what the gold medal meant. “To be able to be on top is really nice and it feels good to finally get here.”

Despite not grabbing gold, Fairfield’s Aliyah Hillman’s height of 10-6 landed her silver in the pole vault behind Kaitlyn Thorne of Central York, while teammate Natalie Brown took third in the discus at 103-5.

In preliminary action, New Oxford’s Nate Clyde ran a 15.09 in the 110 hurdles to grab the top seed for Thursday’s final, while Gettysburg’s Noah Sanders posted the fourth-best time in the 200 at 23.14, though he came into the event with the second seed at 21.84, just off Kristian Phenicie of Dallastown at 21.64. Phenicie’s 22.08 will see him start in lane five on Thursday next to AJ Virata of Red Lion who posted a 21.98.

* Official results were not available at press time

It’s in our DNA

An event this week makes me want to repeat a column I wrote in August 2001. Most of it, anyway. Here, slightly edited for length and modernization, …