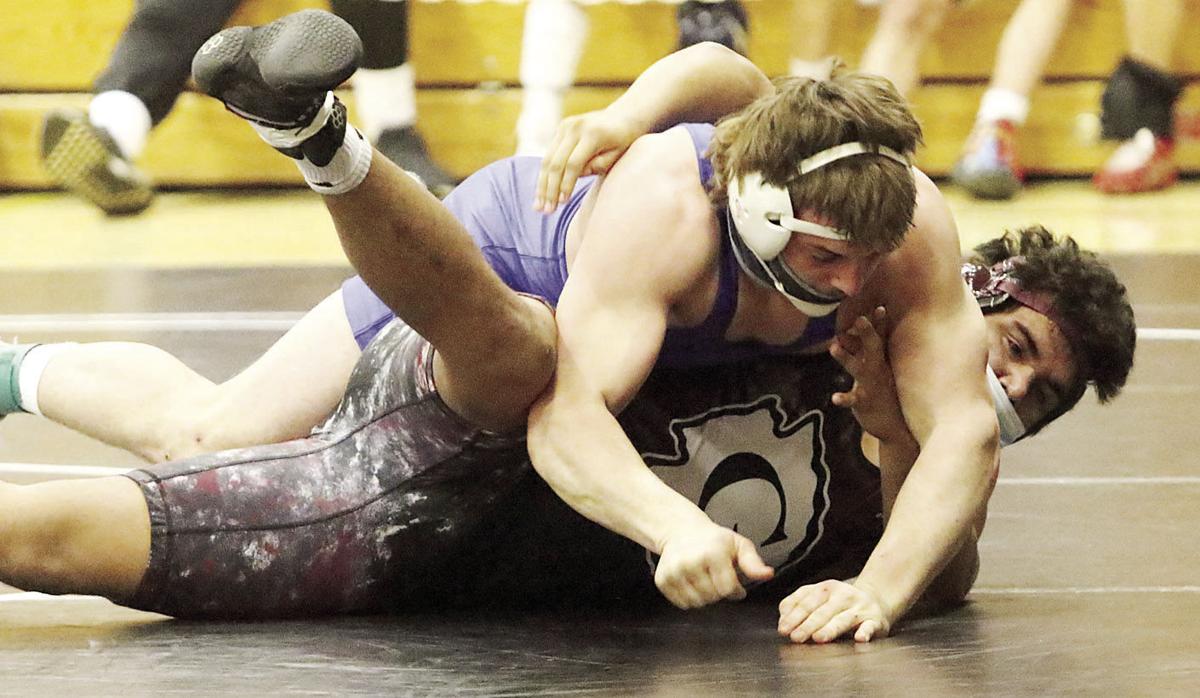 New Oxford’s Dylan Forbes settles back to try to secure a pin of Gettysburg’s Sam Rodriguez in the 215-pounds final of Saturday’s District 3 Class 3A Section 4 championships. Forbes won by fall to capture gold. 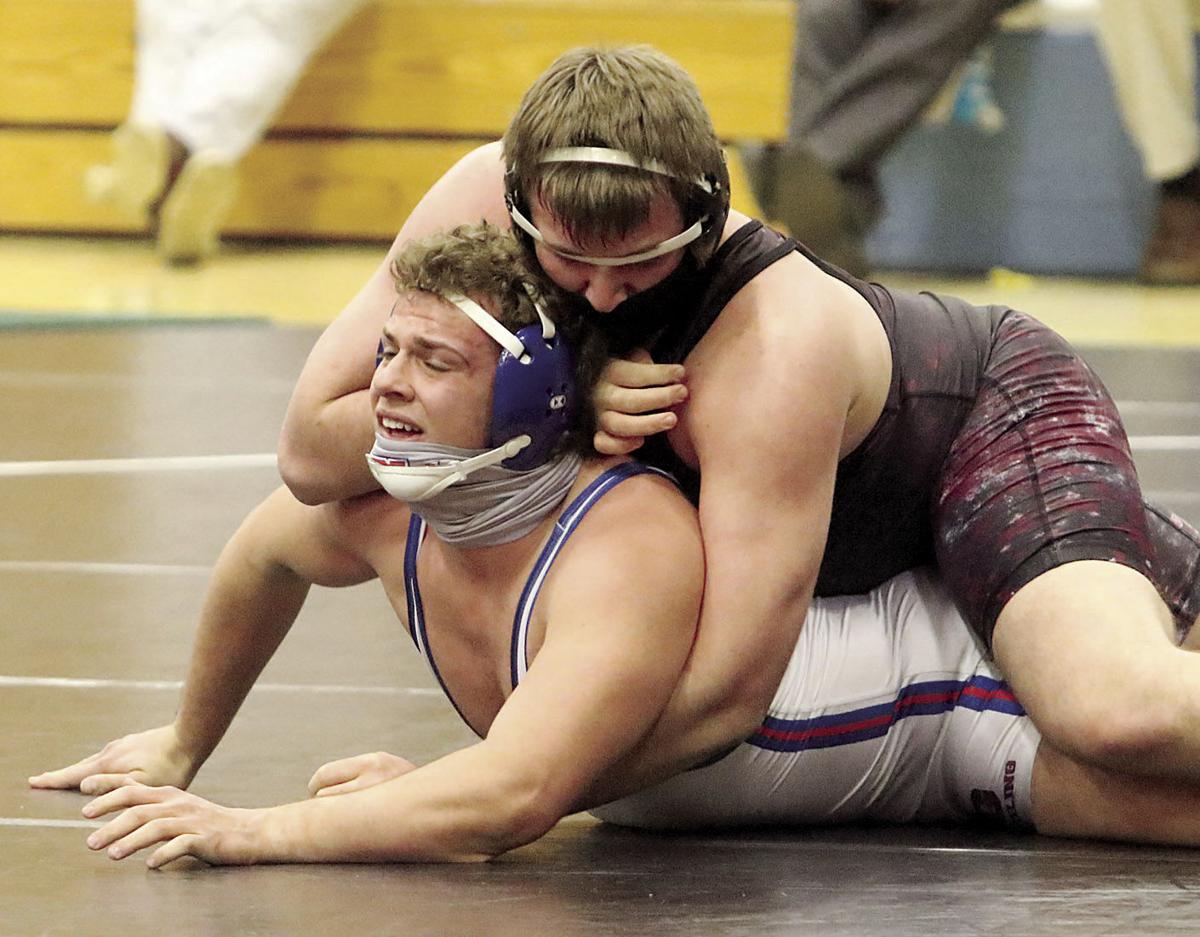 Gettyburg’s Trevor Gallagher puts a strong ride on Spring Grove’s Logan Herbst on the way to a 13-2 major decision in the 285-pound Section 4 championship bout.

New Oxford’s Dylan Forbes settles back to try to secure a pin of Gettysburg’s Sam Rodriguez in the 215-pounds final of Saturday’s District 3 Class 3A Section 4 championships. Forbes won by fall to capture gold.

Gettyburg’s Trevor Gallagher puts a strong ride on Spring Grove’s Logan Herbst on the way to a 13-2 major decision in the 285-pound Section 4 championship bout.

Saturday’s District 3 Class 3A Section 4 Championships at South Western proved to be an up and down day for defending champion Gettysburg.

Sure, the Warriors put six wrestlers into the finals and once again grabbed a team championship with by a comfortable margin over rival Dallastown, but five of those six lost their finals matchups and a few other highly-seeded wrestlers missed out on advancing to next week’s district tournament at Spring Grove.

The day ended strongly, however, as junior Trevor Gallagher grabbed a 13-2 major decision over Logan Herbst of Spring Grove to take home his first section championship.

“Being a sectional champion, that just puts the cherry on the top of everything,” Gallagher, who entered the tournament as the top seed, said of the win. “I knew I had a target on me when I first came in here and I had to live up to that.”

Also taking home a title was New Oxford’s Dylan Forbes at 215 pounds. Forbes, a senior, was a state qualifier a year ago and bumped up from 189 pounds to 215 for the postseason.

In doing so, he gave himself a tough path to a section title. In the semifinals, he had to go to sudden victory to take out third-seeded Andrew Smith of Dallastown, 3-1.

Then in the finals, Forbes squared off with Gettysburg’s Sam Rodriguez, who entered the day seeded fourth, but pinned top-seeded RJ Utz of South Western in the semifinals.

The finals matchup saw Rodriguez get out to an early lead after sprawling on a Forbes shot and getting behind him for a takedown. He held a 2-0 lead into the second period and after cutting Forbes away, led 2-1 early in the second. Rodriguez then went for the home run, and Forbes was ready. The Gettysburg junior stepped in for a double underhook throw and tossed Forbes to his back, but Coloinials’ big man rolled through and took Rodriguez to his back, securing the fall and the championship in 2:42.

“I watched his last match and saw what he did, so I did my best to not get in positions he’d like me to be in,” Forbes said. “When he threw me, I knew I was strong enough to roll him back to his back. There was a little bit of thinking behind it, but in the end I saw it, I felt it, and I just rolled through and it worked.”

New Oxford coach Brian Martin said he barely had time to react when he saw the exchange.

“I really didn’t have time to think, but all I can say is I’m glad it wasn’t me because I’d have broken ribs,” he said. “He has some throws and he’s a little bigger than we are and has some funky stuff, so you’ve got to stay out of those ties.”

The Colonials also added a district tournament qualifier at 113 pounds as sophomore Jerry Dattoli took second place. Dattoli lost his finals matchup 5-4 to Spring Grove’s Braxton Rice. In the true second match with Gettysburg’s Gabe Pecaitis, he led 2-0 late before a clash of heads caused Pecaitis to injury default out of the match.

“It feels good,” Dattoli said of advancing. “I came in here last year at this weight and didn’t place at all and that was my goal this year, to place. Braxton and I had a good match in the finals. I didn’t want to end the day with a kid missing some teeth, but I’m in for next weekend.”

On Pecaitis’ injury, Gettysburg coach Chris Haines said he was upset to see the freshman end his season that way.

“Gabe Pecaitis wrestled a great tournament,” he said. “He did outstanding. He’s a fourth seed and he was wrestling for true second. He did a great job and it’s a shame for him that that’s how it ended.”

Gettysburg also saw Jared Townsend reach the finals at 152 pounds, Jake Cherry at 160, Nathan Ridgley at 172 and Max Gourley at 189.

Townsend fell to Central York’s Jeremiah Smith 9-1. Cherry dropped a 14-1 match to Ryan Fry of Red Lions. Spring Grove’s Thomas Dressler, a two-time state qualifier, notched a 17-1 tech fall over Ridgley, and Gourley was bested by Dallastown’s Brooks Gable, 6-2, in a reversal of results from when the two met earlier this season.

“We had 12 of 13 kids place in the top four and any other year that would be record setting,” Haines said of his team’s overall performance. “No, we didn’t have a good finals round, but it is what it is at this point. We’ve got six moving on, so we’ve got six guys that start fresh next week at 0-0.

“A lot of our guys, when they’re on and they’re wrestling well are pretty much unbeatable. But they’re very inconsistent, and it just goes back to a mindset and a routine. It took Sammy getting injured today to listen to be coached and be capable of what he’s doing.”

Similarly, Haines added that he feels Gourley could’ve taken another victory over Gable.

“At the end of the day, Max needs to listen to his coaches and he will be more successful,” he said.

Forbes, Dattoli and the six Warriors wrestlers will all be back in action Saturday at Spring Grove High School where the District 3 tournament, which also serves as the south central regional, will begin at 9 a.m.

Since the COVID-19 pandemic hit, there has been a huge increase in cyber charter school enrollment across the country, including in Pennsylvan…

Road ahead in Pennsylvania

In the course of my life, I have lived and paid taxes in seven U.S. states. Each has been a unique and interesting place.