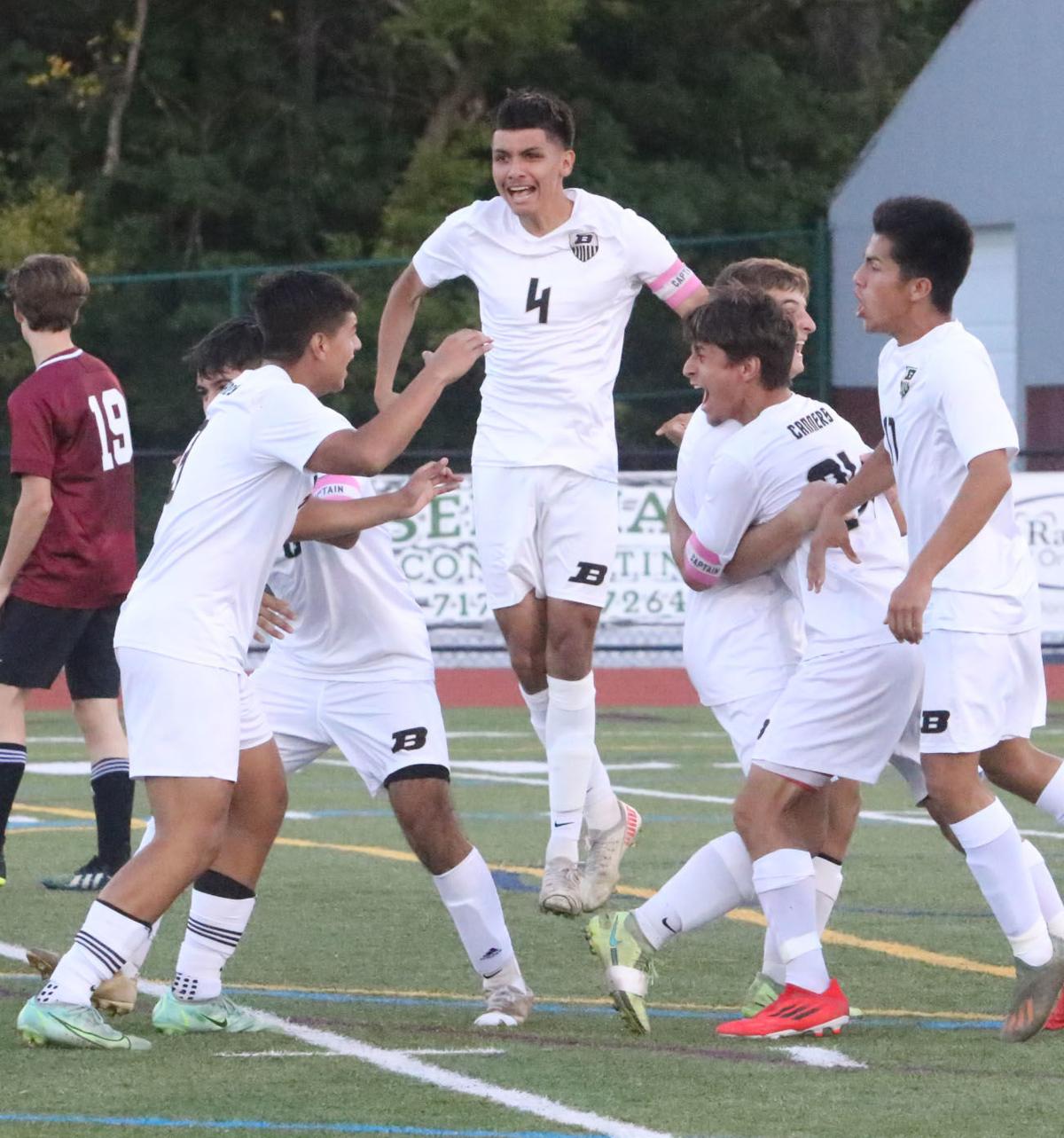 Biglerville senior captain Charles Zavala (4) celebrates with his teammates during a regular-season game at Gettysburg. Zavala and Littlestown’s Josh Blose have been named YAIAA-3 co-players of the year by division head coaches. 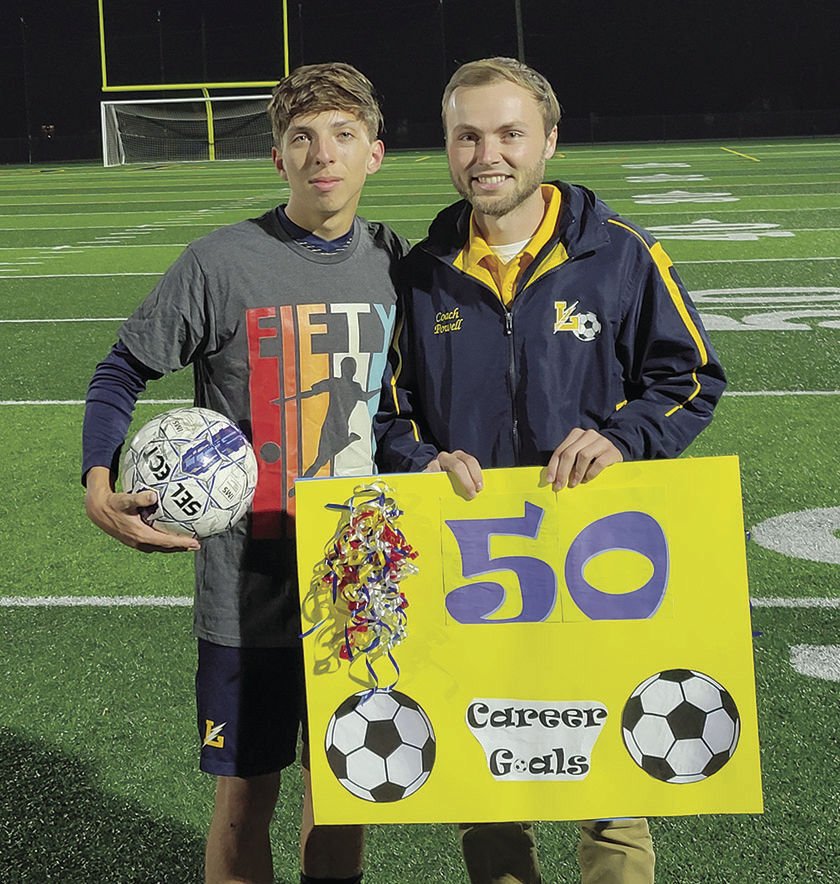 Littlestown senior Josh Blose (left) is pictured with head coach Brett Powell after scoring his 50th career goal this season. Blose and Charles Zavala of Biglerville have been named the YAIAA-3 co-players of the year by division head coaches.

Biglerville senior captain Charles Zavala (4) celebrates with his teammates during a regular-season game at Gettysburg. Zavala and Littlestown’s Josh Blose have been named YAIAA-3 co-players of the year by division head coaches.

Littlestown senior Josh Blose (left) is pictured with head coach Brett Powell after scoring his 50th career goal this season. Blose and Charles Zavala of Biglerville have been named the YAIAA-3 co-players of the year by division head coaches.

The 2021 boys’ soccer season was a landmark one for the Biglerville program.

The Canners put together a remarkable 18-0 regular season to cruise to a YAIAA Division 3 championship. They then went on to reach the YAIAA Tournament finals, including a semifinal victory over Division 1 champ Dallastown.

While Biglerville’s season was eventually brought to an untimely end by Oley Valley in the District 3 Class 2A playoffs, it didn’t end without receiving due recognition. Senior defender Charles Zavala was named Division 3’s co-player of the year alongside Littlestown’s all-time leading goalscorer, Josh Blose, by YAIAA head coaches.

Zavala was immense in defense for the Canners, helping his team to nine shutouts in the regular season and a further two more in the league tournament.

“He was extremely important to us,” Canners’ coach Jebb Nelson said of Zavala. “I think in the league we only allowed three goals while he was on the field and for the entire regular season it was only seven.”

Zavala was a physical and vocal leader, organizing the team’s back line. Nelson said that by the time the postseason rolled around, teams would often not even try to breach Zavala’s side of the defense, often playing to the other side or taking shots from distance.

“He was definitely like the foundation for us,” Nelson said. “He’s a teacher on the field. Last year, I know he did a bicycle kick about quarter of the way into the season and got injured and missed most of the season. That was big for us, and even when he did play it was clear he wasn’t able to do much.”

Nelson said that Zavala, as well as fellow first-team all-stars Emanuel Esquivias, Isiah Kuykendall and Cameron Tyson were part of a group that was instrumental to a significant year for the Canners.

“It was a huge year for the program,” he said. “To beat a school like Dallastown, a giant in the county, to get into the district final, that says a lot for our little school.”

As for Blose, his senior season was a continuation of what had already been a standout career. He scored 28 goals to go along with seven assists to lead the Thunderbolts to the playoffs. His two goals in the opening-round game against Oley Valley were the only goals in program history in the district tournament.

The senior wrapped up his career with a program-record 54 goals, as well as seven assists for a total of 119 points, which was also a program record.

“Well, he’s been the vast majority of the goal-scoring, but more than that he’s just the undisputed leader of the team,” Littlestown coach Brett Powell said. “All in all, he’s just been super important to the program.”

After a breakout season as a junior, Blose became a marked man, both literally and figuratively for the Bolts. Powell said he used that attention to become a more well-rounded player and create opportunities for teammates.

“As teams man-marked him, sometimes with even two players, he had to be willing to adapt and draw players away toward him,” Powell said. “He learned how to be a complete player and not just score goals and not just receive the ball every time.”

Blose’s unselfish play helped him create chances for others, like fellow first-team all-star Diego Guzman. But it also helped take pressure off a Littlestown program that was striving to reach new heights.

“It allows the team to relax a bit and not feel like if we went down a goal we had a mountain to climb,” Powell said of Blose’s presence. “We didn’t need to create a million chances, we just needed one and knew there was a good chance it would go in.”

Blose, Guzman and company led the Bolts to an 11-6-2 record and a season that helped bring energy to an emerging Littlestown program.

“The goal has always been to keep improving and hoping that the hard work they put in during the offseason would pay off and it has,” Powell said of the team’s success. “It’s the first year that it felt like that the community was fully invested in our soccer program and that was pretty cool to see. Because it was some pretty good soccer and some pretty entertaining soccer to watch.”

Hang in there, America, and give thanks

The other day, I ran into someone who was too discouraged to give thanks for much of anything.

A tradition to be thankful for

Resolutions for a thankful community

It is Thanksgiving Day as I write this. The bird is in the oven, “The National Dog Show” is on television and the stuffing is prepped in a pan.