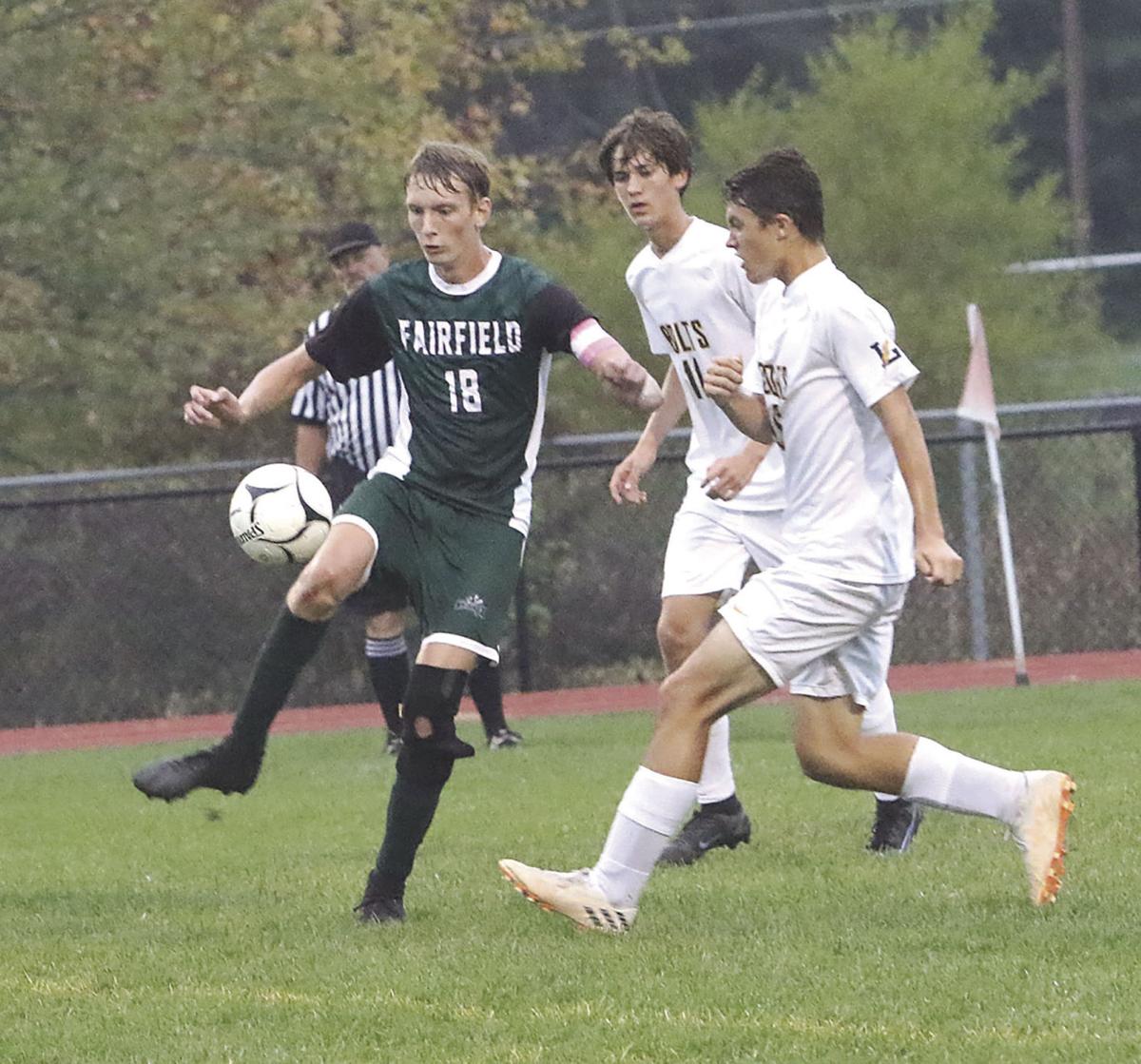 IN FULL CONTROL — Fairfield’s Nate Snyder, left, controls the ball in front of a pair of Littlestown defenders. Snyder scored a late goal in the 4-0 victory to record his 100th career points. 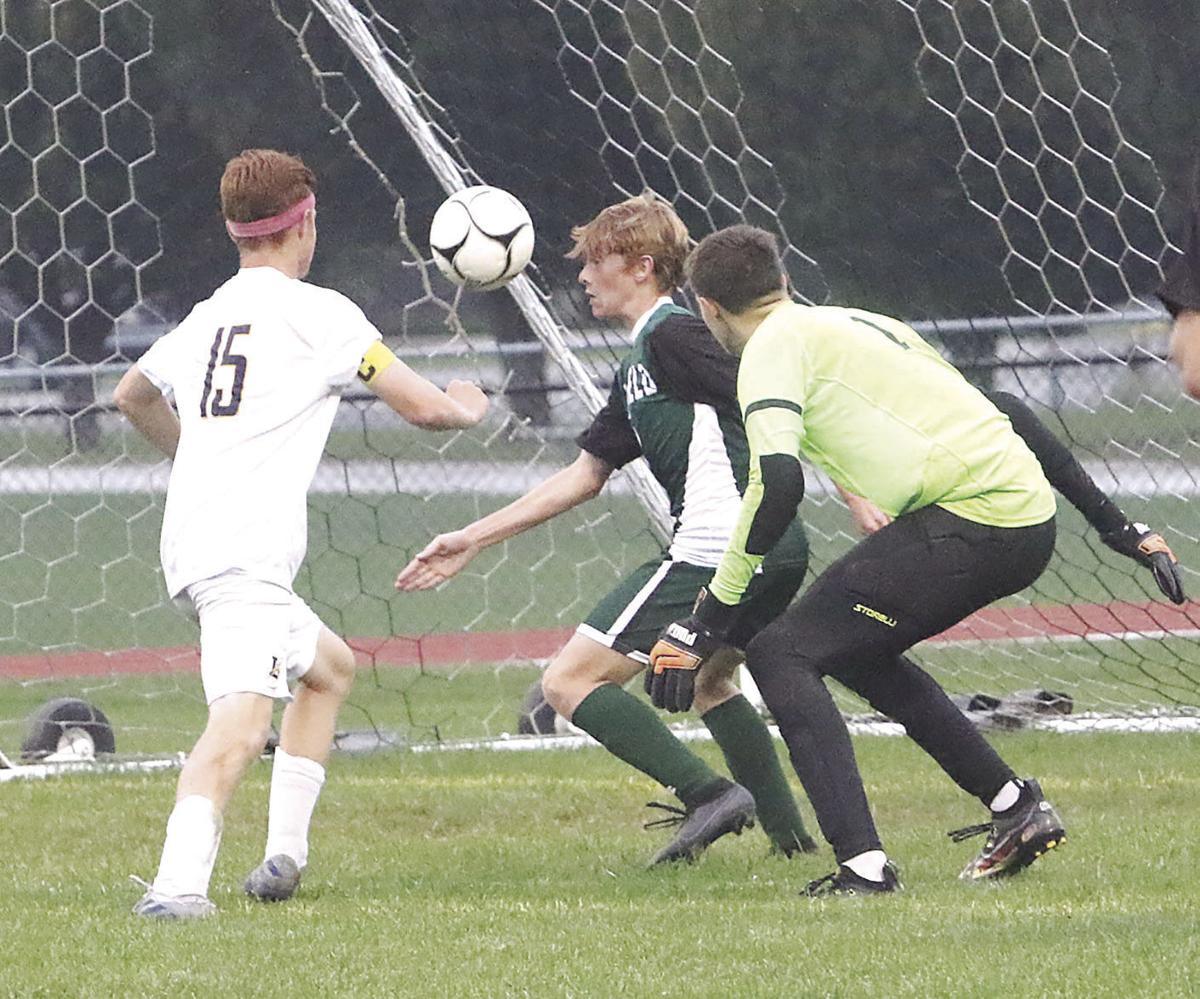 IN FULL CONTROL — Fairfield’s Nate Snyder, left, controls the ball in front of a pair of Littlestown defenders. Snyder scored a late goal in the 4-0 victory to record his 100th career points.

Fairfield senior Nate Snyder had a night to remember on Tues.

Snyder had hand in all of his team’s goals and picked up the 100th point of his career in the Knights’ 4-0 victory over visiting Littlestown in YAIAA-3 boys soccer action Tuesday evening at Robert E. Finefrock Field.

Snyder scored twice, to give him 11 markers on the campaign and handed out a pair of assists, as well, to help his team improve to 10-1 on the season.

Fairfield (10-1 over, 8-1 in Y-3) got the better of the play in the opening half, but couldn’t finish its chances and things went to the break deadlocked at zero.

The Knights had a trio of shots on goal in the opening 40 minutes with Jake Ogle registering a header that was handled easily by Bolt keeper Christopher Meakin at the 23:26 mark.

Meakin made a diving stop to his right on Chaz Kline’s chance with 12:19 left, then Ciaran Phelan went right at the 6-foot-7 net minder from 20 yards out and was denied with 6:08 to play until intermission.

Littlestown (8-4-1, 5-4-1) had one shot on goal in the opening half that came from Dylan Smeak, but that was handled by Knight backstop Eric Ball with 3:56 left in the opening stanza.

“We went over what we were doing well in the first half and told them to keep it up,” Fairfield head coach Tim Smith said of his halftime speech. “They did and the goals came in the second half. Our guys have a great attitude and they kept executing things the way they’re supposed to.”

Junior Jonah Longanecker broke the deadlock when he scored with a header on a rebound of Snyder’s shot that he blasted off of a direct kick into Meakin. Longanecker got to it with his noggin and pushed his side in front with 36:45 left.

Phelan, a freshman, doubled the advantage when he headed a pass from Snyder over Meakin into the net at the 27:21 mark.

“We spend at least 30 minutes of every practice working on our set pieces,” Smith said. “We also work hard on our headers.”

The hosts added to their advantage with 21:03 to play when Snyder headed in a cross of a corner from Kline for Kline’s 12th assist of the year.

“Nate is a four-year starter and he’s been the catalyst of our midfield for all four years,” Smith said. “He’s a leader, he’s one of our captains and our young guys all look to him for leadership and guidance.”

Snyder’s milestone put a bow on the scoring and came with 12:11 to go when he redirected a long throw-in from Ethan Collins into the net.

“Coach tells me to get in the box and try to make something happen on throw-ins. I’m a bigger guy, so I try to get myself in a good position,” Snyder said. “Their keeper called for the ball, so I knew if I got a head on it that the goal would be wide open.”

The shutout was Fairfield’s fifth straight and sixth of the season. It had Smith tipping his cap to his entire defensive backline with a special nod to Collins, the senior center back, who kept Littlestown star striker Josh Blose off the board and barely able to touch the ball.

Blose entered the match with 21 goals on the season and a school-record 47 for his career.

“Ethan Collins did a fabulous job of defending Blose,” Smith said. “Josh is a tremendous player and we know how dangerous he is every time he has the ball. It only takes a second and a small bit of room for him to get a shot off.”

Fairfield enjoyed an 8-4 advantage in shots on goal and a 6-3 edge in corners.

Next up for the Knights is a matchup with the only team to defeat them so far this season, Biglerville (13-0, 9-0). The Canners took down Fairfield, 4-2, on September 18. The rematch is Thursday at Biglerville at 5 p.m.

A Biglerville win would clinch no worse than a tie for the division crown, but a Fairfield victory would draw the teams even with two matches remaining for each.

“Biglerville beat us the first time, but I think we can definitely compete with them,” Smith said. “It’s gonna come down to the two defenses, I believe.”

Littlestown returns to action with a road match at Delone Catholic on Thursday at 7 p.m. Then the Bolts and Knights will face off again on Saturday at Littlestown at 11 a.m.

How many birthdays do you celebrate in your family? My husband and I share five grown children, their “others” and nine grandchildren. At our …