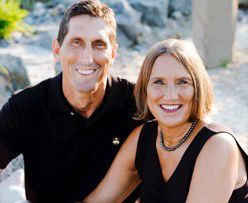 Pat and Tammy McLeod’s lives were irrevocably changed the day their son Zach collapsed after a direct blow to the head during a gang tackle on a high school football field in Boston in 2008.

They spent years searching for answers, some spiritual and others material, as they tried to make sense of the acute left subdural hematoma that left their son in a coma, fighting for life.

The miracle was that Zach survived — the McLeods were told that roughly half of athletes suffering similar injuries died.

But the boy who left the hospital was never the same. The brain damage he suffered left him with little short term memory and little ability to speak. He will require direct care at all times for the rest of his life and will never return to school.

Harvard Chaplains by profession, the McLeods are well connected. Yet even with all the resources at their fingertips, they struggled to find a book that laid out strategies for coping with what Tammy referred to as ambiguous loss — one that is suffered without closure or understanding.

“I had read grief books for five years and wasn’t finding help,” said Tammy (Harman McLeod), who grew up in Hanover and still visits her parents in Gettysburg. “There is no ceremony or validation for that type of loss.”

The work of Dr. Pauline Boss, a leading family therapist who pioneered the study of ambiguous loss, put the McLeods on the right path in dealing with their experience. To help others find their way, the parents are now publishing a memoir, “Hit Hard — One family’s journey of letting go of what was — and learning to live with what is.”

“The technical literature can be harder to understand,” Tammy said. We thought hearing it as a story will help people.”

The McLeods returned from the hospital, forever grateful to still have Zach in their lives. That didn’t change the fact that part of him was forever lost to those who stood by him. Zach’s sister lost a best friend. One brother lost a mentor, the other a second father figure, Tammy said. Each of them became caretakers for a gentle soul they recognized, but could no longer completely relate to.

The book tells how the parents coped with hospital visits, Zach’s personal maintenance and parenting several children while spending extra time with one with special needs.

It discusses the personal trials and tribulations they experienced as they answered questions for those who asked them as chaplains how the experience affected their relationship with God.

“Psalm 34, Verse 18 says, ‘the lord is near to the brokenhearted, and saves the crushed in spirit,’” she said. “When you’re suffering, you can experience that. We try to encourage people to be authentic, open and honest, to go to God when they’re suffering because he gets it.”

The book also gives recommendations to provide closure for people suffering through ambiguous loss. The term is also used to describe those who have had loved ones kidnapped, have gone missing in action, or have been lost to immigration or adoption. Similar to Zach’s case, it also provides guidelines for how to come to grips with the loss of someone’s cognitive facilities, through Alzheimers, dementia, mental illness, addiction or debilitating brain injury, Tammy said.

One moment of great relief came after the family held a ceremony for Zach’s friends and family members to grieve while reliving their favorite memories of the boy they’d known. A large congregation met at the church to tearfully, but lovingly tell stories of Zach before the injury. He’d been on a trajectory to play football at an Ivy League school. He’d been a popular teammate and friend, and a passionate disciple of Christian teachings, and wished to help orphans in Africa after he’d graduated. His testimony during his baptism, held two weeks before he suffered his injury, stated simply, “My life, no matter how long or how short, I want to live in God’s glory.”

To spare his feelings, Zach had not been invited to the ceremony, but met the group 30 minutes later for a more joyous occasion — his birthday celebration at a boathouse on the Charles River. Once again, friends and family shared their love for Zach, who received the message pumping his fist, hugging his pals and screaming in delight.

“He’s the most happy and joyful person we know,” Tammy said. “He loves God and people more than anyone. People look at him in church and say he’s an actual sermon all by himself. He’s just amazing.”

The book also emboldens the debate the country is currently having regarding contact sport, namely football. On one hand, the athletic competition builds teamwork on the field and camaraderie off of it. It motivates physical specimens to make the most of their gifts. On the other hand, it is the cause of devastating, needless injuries like the one Zach suffered.

Pat, a former Division I football player at Montana State, is still a fan of the game and even coaches in some capacity, Tammy said. He was not available at the time of the interview.

Once a fan, Tammy now winces when she hears helmets crash together. She can no longer, in good conscience, support the sport that once brought her so much joy.

“I hope (after reading), people talk about whether they want their kids to play football or not,” she said. “I knew that players could break their bodies. I didn’t know then that they could also break their brains. Often, with brain injury in sports, people only look at the guy that got injured, but not the wife, the kids or the parents. It’s really tough on the whole family system.”

“Hit Hard” will become available on July 9, wherever books are sold. The listed price is $15.99. Tammy and Pat McLeod will be available for a book signing at 6:30 p.m. on Tuesday, July 16 at Books-A-Million in the North Hanover Mall. They are hoping to add a location in Gettysburg on Monday, July 15.

Do you ever get an overwhelming sense of impending doom?