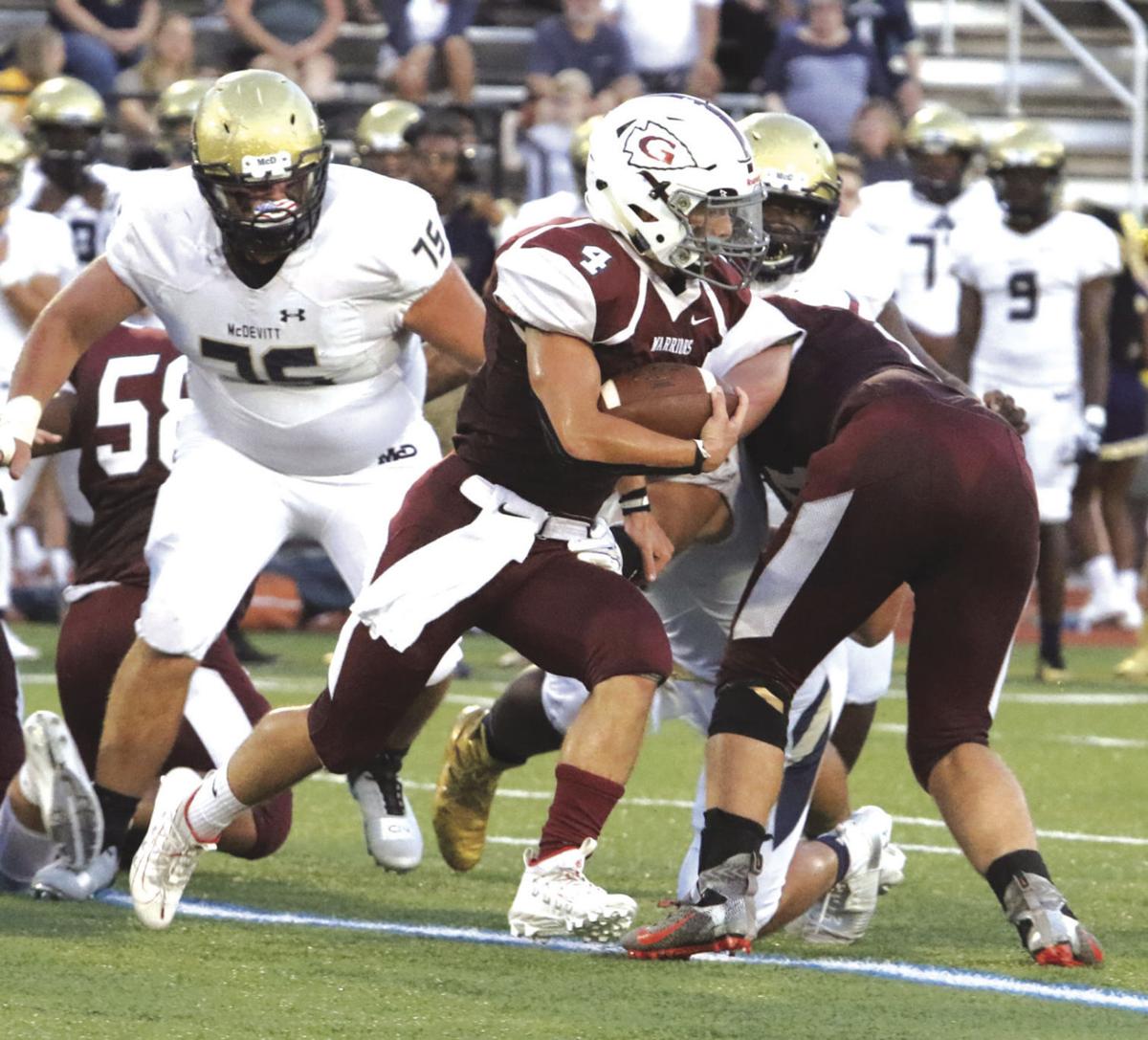 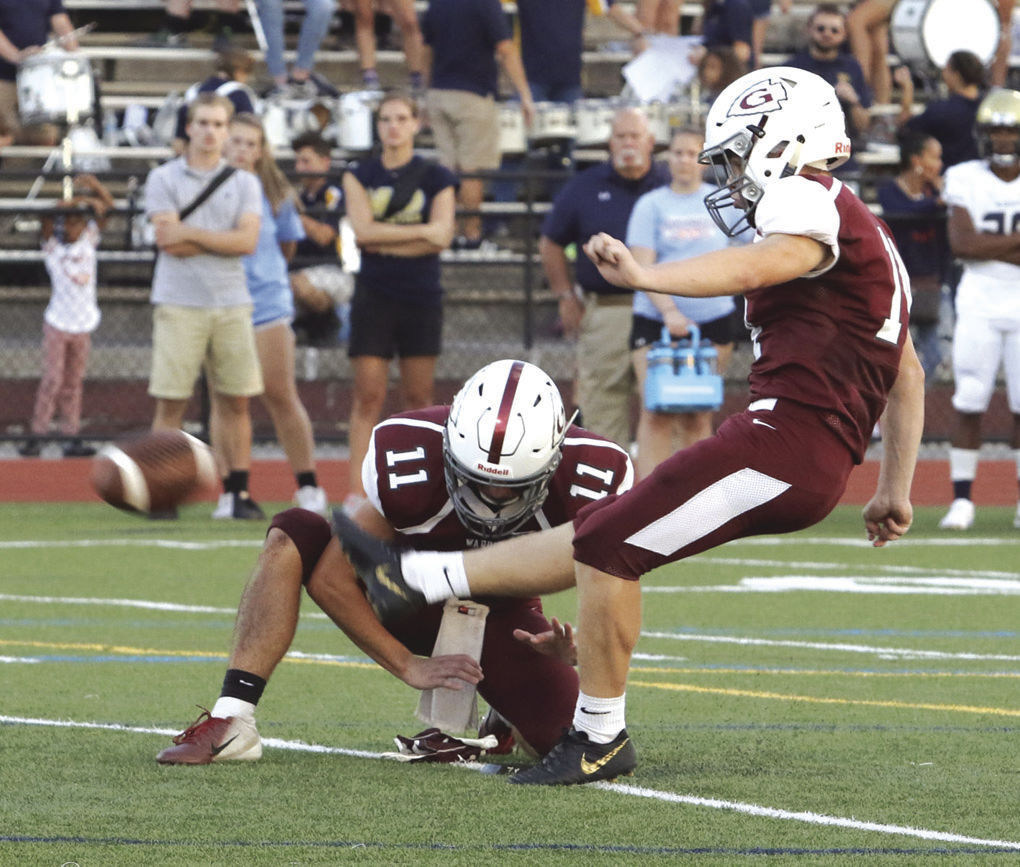 STEADY LEG — Gettysburg’s Zach Parr puts foot to ball during a home game last season at Warrior Stadium. Parr booted three field goals and 39 extra points a year ago, and should serve as a weapon in the kicking game again this fall.

STEADY LEG — Gettysburg’s Zach Parr puts foot to ball during a home game last season at Warrior Stadium. Parr booted three field goals and 39 extra points a year ago, and should serve as a weapon in the kicking game again this fall.

The play’s the thing.

Matt Heiser might not often quote Shakespeare, but he certainly shares the bard’s sentiment.

The Gettysburg High School head football coach wants to win every time out, make no mistake about it. But in the year of COVID, just getting to the gridiron games is a victory in itself.

“We want to have these games for the kids – especially for the seniors who want to play at the next level,” said Heiser, in his ninth season at the Warrior helm. “These games you never get back. Some of the kids will never play again – Friday night under the lights – they’ll never see that again – except as a spectator. This is their last chance.”

As if coaching a football team weren’t challenging enough, Heiser has had to abide by a strict pandemic protocol that includes daily temperature readings, the wearing of masks, social distancing in off-field situations and disinfectant of equipment, including tackle pads and balls. Players bring their own water and launder their gear. They are encouraged to wash hands frequently and properly hydrate.

Every routine has changed in this new world of sports. Practices are held in the evening – and there are only 15 sessions allowed before the opener.

The challenge at any level is to replace those who have moved on. Heiser needs plug-in parts at quarterback, where Zach Ketterman was a four-year starter, and must try to find facsimiles for electric all-purpose back Charles Warren and two-way sledge hammer Austin Heiser. Warren (1,419 yards from scrimmage, 22 total TDs) and Heiser, an all-state selection at linebacker, matriculated to Milllersville Uniersity and are both on the varsity squad. Ketterman will play baseball at Western Carolina.

Line play is the key to any team’s success and Heiser has several experienced linemen of considerable size.

Hard-nosed Gunner Pennington has graduated, but younger brother Ruger Pennington returns to lead a talented corps of running backs that includes Landon McGee, Taysean Foster, Justino Neikirk, Cody Rexroth and Jayden Johnson. Wideouts Gunnar Wilson and Andrew Gastley add savvy and will get a chance to show what they can do without Warren drawing triple coverage.

Quarterback is still a wide-open competition, with senior Asher Baddick, junior Chris Boone and sophomores Tanner Newman and Christian Paul all seeking to be part of the equation. Whoever emerges from the gauntlet will call signals in Heiser’s multiple-I offense.

When the Warriors line up in an odd-man front on defense, Gallagher will start on the nose flanked by ends Richardson, Williams or Dunn Kessel. The inside linebacking corps is spear-headed by Pennington and Chris Wagner, with Boone and Brockett getting plenty of snaps. Linebackers Jeremiah Scott, Jeremiah Spangler and Rexroth will patrol the outside.

The secondary is composed of corners Neikirk, Gastley, Foster and Tyler Siegman along with safeties Wilson, Badick and Newman.

Senior Zach Parr will handle all of the kicking for Gettysburg and should be an asset for Heiser throughout the six-game slate. Only four teams qualify for the District 3 Class 5A playoffs.

With such a short schedule, every contest is of utmost importance.

“There are no re-dos,” said Heiser, whose 2019 squad finished with an 8-3 overall record, including a loss to Berks Catholic in the first round of the district playoffs. “They all count.”

According to Heiser, the YAIAA-2 is wide open this season.

“York Suburban (who won the league last year) looks solid again,” he said. “They have a big tight end and a really good back. West York is explosive. Susquehannock under Coach (Steve) Wiles is well-coached. Kennard-Dale is a threat with its wing T and a new turf field. New Oxford dropped down from Division 1; they are a bit of an unknown.”

With opening day looming, Heiser hopes to stage an intra-squad scrimmage soon in order to make his final decision on the slate of starters. The Warriors lift the lid on the season on Sept. 18 when West York comes calling.

“Our goal is to do our best and be in the mix at the top of the league,” said Heiser. “That never changes.”

Mrs. Knox, my high school English teacher, must be tossing and turning in her grave. Have you ever really listened to some of the phrases used…

Inequality and poverty in Adams County

In many ways, Adams County consists of two separate economies. One economy is made up of relatively affluent entrepreneurs; professionals empl…

The end of an era

Once upon a time, sports was a welcomed respite from everyday life, and in particular, politics. In contemporary America, professional sports …