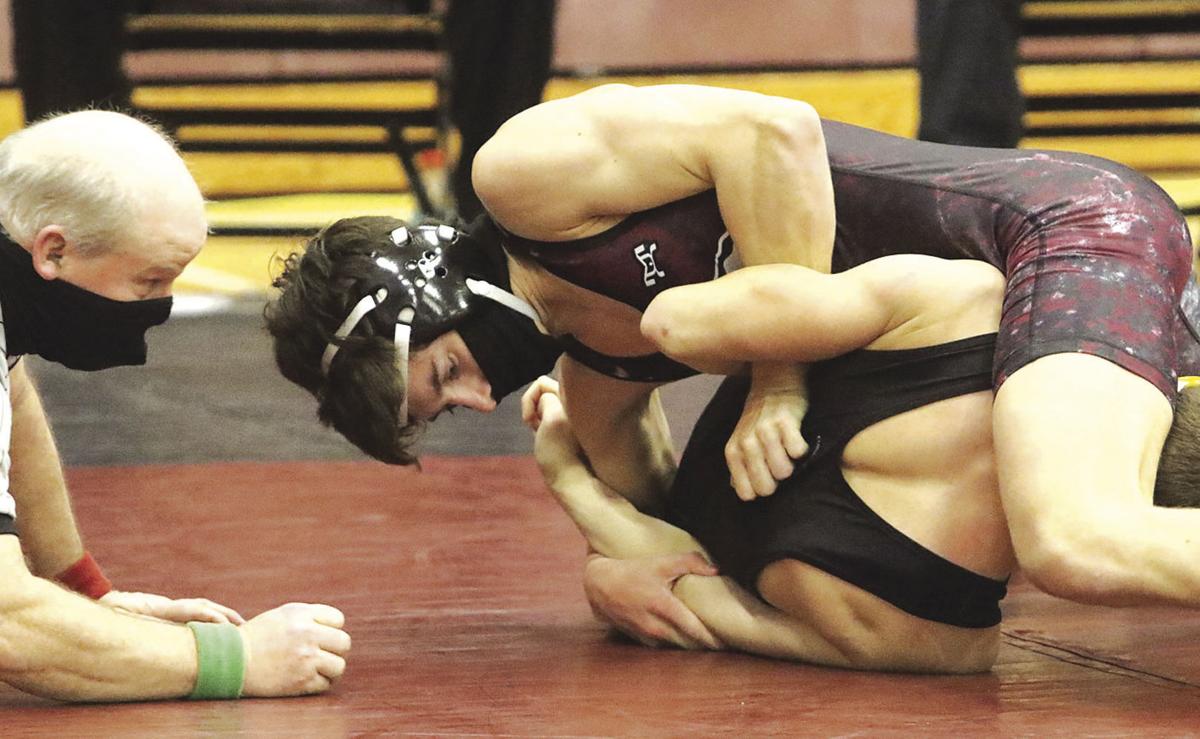 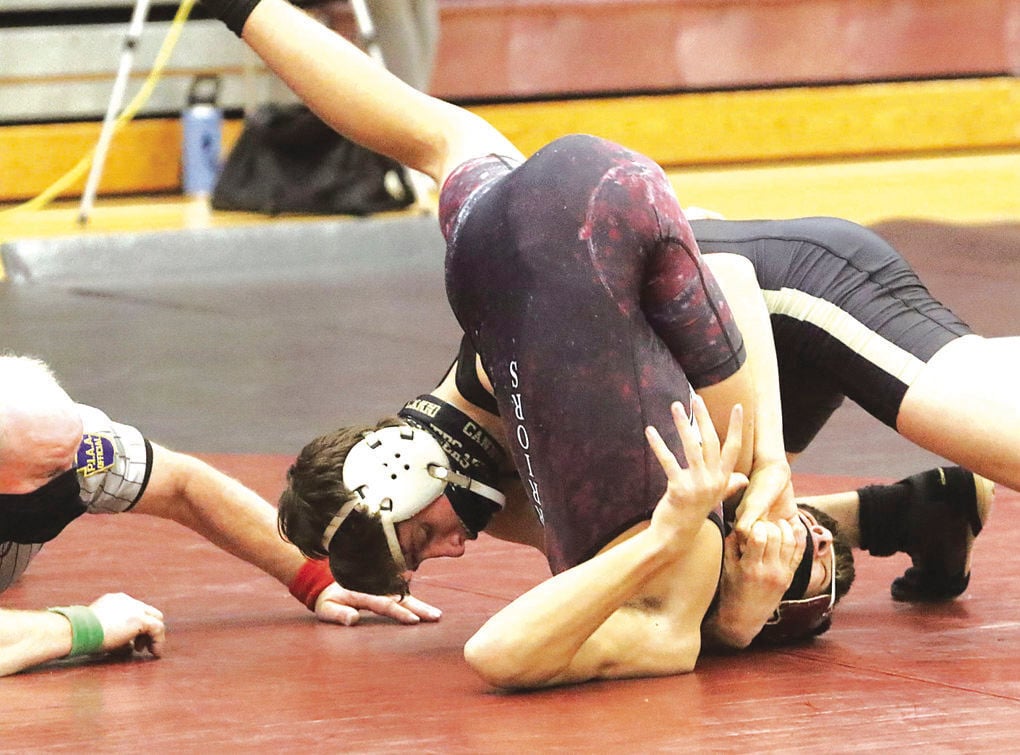 The mad dash is officially on.

Wrestling season typically plays out like a marathon, with months of practicing and competing needed to hone physical tools and sharpen mental focus. The unprecedented events that unfolded since the 2020 PIAA Championships last March have turned that long and winding road into a dragstrip.

And the green flag is waving.

“There is way more urgency because we didn’t have December and the beginning of January,” said Gettysburg head coach Chris Haines. “The things you should have been able to work out before Christmas break are being worked out in the middle of your competition. We have about three weeks left, that’s it.”

Haines’ Warriors opened their doors on Saturday and welcomed in five teams, including Biglerville, for the Gettysburg Duals. The atmosphere was a bit muted without fans in attendance, but it was back to business on the mat where the hosts went 5-0 to repeat as team champs.

Gettysburg rolled Biglerville (55-12), Big Spring (63-9), Red Lion (63-9) and Palmyra (75-0) before taking down Chambersburg (39-23) in the finale. Despite the lopsided scores there is plenty of work to do with precious little time according to Haines.

“We’re good, it’s not that I don’t feel we’re good, we just need to be sharp,” he said. “We wrestled very, very poorly, mostly from an attack standpoint, but on the scoreboard we still did extremely well.”

The Warriors entered Saturday on the heels of blowout wins over Dover and Susquehannock in which they dropped only one bout, and the comfy start could be responsible for a lack of fire, according to their coach.

“The lack of routine and knowing that we are good, they’re pretty lax about their attitudes sometimes,” said Haines. “That’s going to catch up to us in the future.”

Gettysburg (7-0) fell behind 7-0 after a pair of bouts against Chambersburg, thanks to the efforts of Luke Mentzer and Anthony Colangelo at 132 and 138, respectively. Tyler Withers provided a wake-up call when he snapped Kelby Mixell to his back for a fall in 2:54 that erased an early deficit.

Senior Jared Townsend needed only 27 seconds to flatten Gavin Nicholson, capping a 5-0 day that gave his team a lead it would not relinquish.

Jacob Cherry drew a target on Ryder Davenport’s right leg and peppered it with outside shots, connecting late in the second period and again midway through the third to earn a 6-2 decision that bumped Gettysburg’s lead to 15-7.

The Trojans (4-2) sent ace Tate Nichter at 170 and he turned in a 14-3 major decision over Nathan Ridgley. Nichter, a former state medalist with 63 career pins, used four takedowns and a cradle for his big win.

Any momentum Chambersburg hoped to build was leveled by Max Gourley, who tossed Aidan Hight to his back for a fall in 4:35. Gourley, who will wrestle next year at Virginia Military Institute, led 13-3 at the time of the stick.

The athletic senior won the award for most falls in the least amount of time after pinning all five of his opponents in 12:20 of action.

Zach Evans built a 5-2 lead through two periods against Sam Rodriguez before holding on for a 6-4 decision that drew the Trojans to within 21-14, but three forfeits over the next four weights made it academic.

“This is the preseason, that’s the way we’re treating it,” said Chambersburg head coach Matt Mentzer. “We had a couple more kids that were available but some of them had wrestled three matches and I felt that was enough for today. The kids might not be happy with it but that’s too bad. I was pleased with the way we wrestled.”

Mentzer was also happy to be in the mix on Saturday, which provided his team the opportunity to get five matches as it continues to round into form.

“This is exactly what we wanted,” he said. “Anytime you get to wrestle against Chris’s team, they’re well-coached, in shape, they hustle and they’re going to force our guys to do that. If our guys can’t do that, I’d rather know now than the second week of February.”

With a rematch against Chambersburg only eight days away, it’s back to work for the Warriors and their head coach.

“I need to do a better job of coaching, motivating them and getting them excited to wrestle,” said Haines. “They are kids that sometimes need motivation.”

Biglerville, which was added to the field after Bermudian Springs was forced to withdraw, was excited to tee it up five times. The Canners have a mix of experienced and inexperienced wrestlers in addition to several who are making a return to the sport after taking several years off.

“It worked out fantastic,” said Canner head coach Ken Haines. “It was a short bus trip, we got five quality matches and the boys were chomping at the bit. They were happy to compete.”

After falling to Gettysburg in Round 1, Biglerville (2-4) broke into the win column thanks to a big rally against Red Lion. The Canners trailed 24-6 after five bouts before junior Levi Haines produced a first-period fall at 145. Ethan Slaybaugh followed with a 12-4 major decision and Gage Bishop tacked on six more points with a pin.

A forfeit temporarily slowed the rally but when Levi Roberts and Josh Fulton came through with pins at 189 and 215, the Canners led 34-30. Another forfeit gave the Lions a brief lead heading into the winner-take-all finale, where sophomore Brody Gardner stuck Austin Kuehne in 4:45 to seal a 40-36 win.

The Canners were unable to grab another win on Saturday, falling to Palmyra 42-35 when the Panthers claimed the last two bouts via fall.

The return of Fulton, who went 3-2 Saturday, and classmate Sam Hurda give the Canners extra muscle on the top end of the lineup.

“Josh and Sammy are fun to watch, they’re goers and they work hard in the practice room,” said Ken Haines. “It’s nice to have Josh’s experience there, and Sammy hasn’t competed since eighth grade but he did some exciting things (Saturday) and it was neat to see that.”

Levi Haines was 5-0 with three falls and a pair of forfeits while freshman Ben Wright went 4-1 at 120. Gardner, Slaybaugh and Bishop notched three wins apiece.

The Canners have a big week ahead as they tangle with Boiling Springs on Wednesday before meeting YAIAA-3 counterpart Littlestown the following night. Ken Haines believed getting Saturday’s tournament in the books will give his team an opportunity to evaluate as it moves forward.

“They were able to compete and give us a reading,” he said. “And it’s important they gauge what they’re doing. A lot of those kids really do enjoy competing and wrestling, and it was a whole entire day of fun.”

Earl E. Davis is a man I never knew. He died four years before I was born but I have adopted him as one of my own. Earl is buried in the Getty…