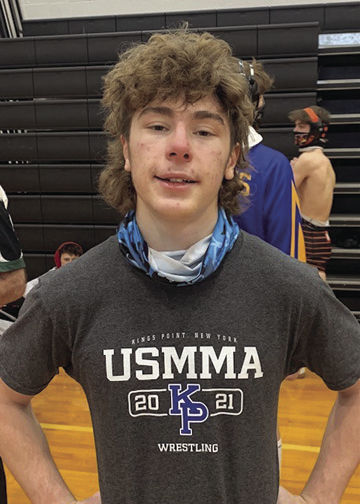 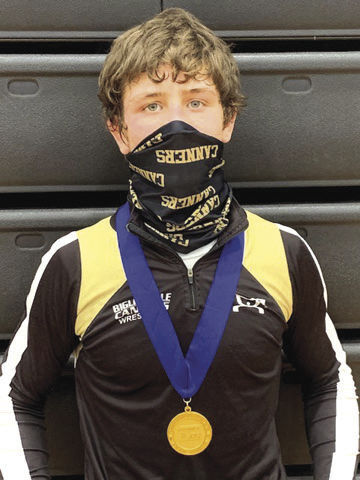 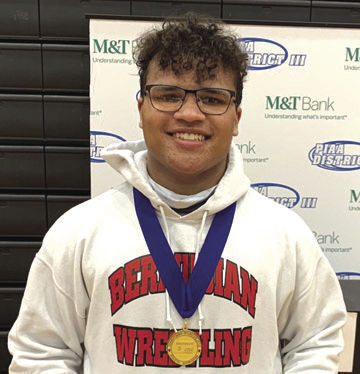 The Biglerville junior saw a familiar face when he lined up to vie for gold at 145 pounds in Sunday’s District 3 Class 2A Championships at Central Dauphin East. Haines has faced Brandywine Heights star Noah Frack a handful of times during his stellar career, including last year’s D3 title match at 126 pounds.

And just as he did a year ago when he scored a technical fall over the Bullet in the district final, Haines floored Frack, racking up eight takedowns in a 16-6 major decision that produced his third straight district title.

Haines was joined in the gold club by Littlestown’s Connor Brown (138) and Bermudian Springs’ Savauri Shelton (215), who pulled off repeats of their own as they defended their respective 2020 crowns.

Bermudian’s Brennan Schisler (132) and Hogan Swenski (285) also worked into the finals but were stopped in rematches of their own.

For Haines, the opponent is nameless and faceless.

“It’s really a non-factor,” said Haines (21-0) of facing off against Frack so many times. “Noah is a great competitor and I know he’s going to come out and fight.

“I was looking to have a high rate of attacks and I went in and executed. I was really focused on my setups and attacks and shutting down his offense. I kept the pressure high.”

A couple of nice finishes gave Haines an early lead, and when he hit a late throw-by it was 6-2 after a period. The lead stood at 8-3 after four minutes before Haines tested Frack’s tank in the final frame. A snap-and-spin put two points on the board, a nifty knee block added two more and before it was all said and done, Haines had eight takedowns in his back pocket and a third district championship.

“I’ve been in that position, it’s tough to deal with when you have a lot of pressure on your like that,” Haines said of his non-stop attacks. “I was really just focused on what I was going to do next and stay multiple steps ahead of him to create those angles.”

Brown (20-1) shifted into the right lane in his bout against Kobin Karper of Boiling Springs, which was a rematch of the Section 1 final that took place less than 24 hours earlier. In Saturday’s matchup, Karper heated things up late and claimed an 11-9 decision.

On Sunday, Brown dictated the tempo and kept a cap on the scoring. Although both wrestlers took their shots, excellent scrambling kept the score knotted at 1-1 with less than a minute remaining. Brown bided his time before squeezing off a dandy of a shot that resulted in a 3-1 win and more D3 gold.

“There was a little where I needed to control him, and he slowed down a little which definitely helped, too,” said Brown. “I wanted to slow his movements and get to work on my stuff. There was a lot less openings with everything slowed down. I knew I had to get a really good shot compared to yesterday, where it was a little bit of a mess.”

Brown, who nabbed a state medal as a junior, is positioned well for the upcoming Southeast Regional Tournament.

“I’m feeling good right now and I should move on,” he said. “I think I have a good chance making it to states again.”

Shelton (19-0) had no shot at a rematch as he faced Berks Catholic freshman Brody Kline (16-2) in the title round. Also different for the Berm senior was a day in which he didn’t record a fall. Nevertheless, Shelton went six minutes three straight times, polishing off his D3 repeat by covering Kline, 5-1.

“I didn’t do as much as I thought I could have done, I didn’t pin anybody,” he said. “I’ll work on some things on top and on my feet, but other than that I wrestled pretty well.”

The unusual format, which saw sectional tournaments take place on Saturday at CD East and Susquenita before making the quick turnaround to be right back at CD East on Sunday, had an effect on some competitors who did not experience an individual tournament during the regular season.

“I haven’t been at a tournament all year, so being here all day and waiting to wrestle, I’m exhausted,” said Shelton. “It takes a toll but you ease back into.”

Schisler needed no introductions to Susquenita’s Dominic Caldwell, who he edged in ultimate tiebreaker to claim sectional gold on Saturday evening. The two faced off again on Sunday, and the separation was once again paper thin.

Caldwell finished a shot with 44 seconds left to go up 3-1, then held on for dear life after Schisler (16-3) escaped and came oh-so close to winning it with a takedown on two occasions.

Schisler worked behind Caldwell after escaping but was unable to complete a mat return. On a final restart the junior Eagle shot in, funked and was coming around the back just as the buzzer sounded.

“The rematch from sectionals goes either way,” said Berm head coach Dave McCollulm. “We needed one more second and I think we have the two. We got behind him but couldn’t mat return him. That was a very, very good match.”

Swenski (18-1) absorbed his first loss of the season when he was edged by Bishop McDevitt sophomore Riley Robell, 3-1. The two have history as Robell nipped Swenski, 1-0, in last year’s semifinals at 182. Both hulks have added 50 pounds to their frames seemingly without losing any agility or quickness.

Robell showed off his athleticism in a pivotal sequence to end the middle period. Up 1-0, he countered a Swenski shot and held on during a roll-through for a takedown that ultimately decided the outcome.

“We’re hoping Hogan and Robell hit each other next week,” said McCollum. “Hogan always wrestles him close, we just haven’t been able to crack through that defense of his yet.”

All five Times Area finalist won Section 1 titles at Susquenita on Saturday before taking their talents to CD East, where they’ll be again next Saturday for regionals.

Joining the finalists at regionals will be Fairfield’s Jacob Moyer, who was third at 285, as well as Littlestown’s Cameron Mingee (113) and Ayden Dillon (145), and Hanover’s Malcolm Gerlach (152), who all placed fourth. Moyer racked up three falls on Sunday, his only blemish a 5-1 loss to Robell in the semis.

Top 4 placers at each weight advance to

Since the COVID-19 pandemic hit, there has been a huge increase in cyber charter school enrollment across the country, including in Pennsylvan…

Road ahead in Pennsylvania

In the course of my life, I have lived and paid taxes in seven U.S. states. Each has been a unique and interesting place.