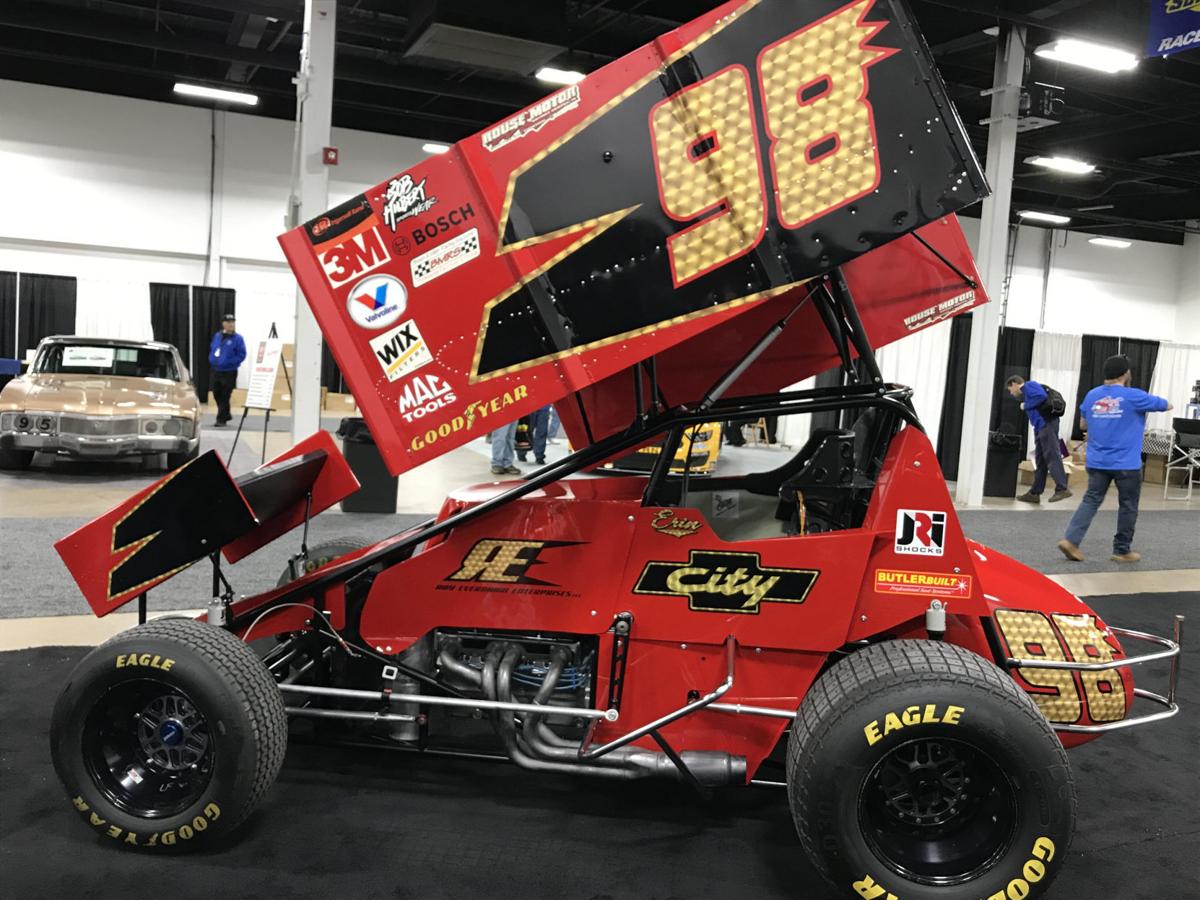 HOW IT’S MEANT TO BE — In April of 2011, Erin Crocker Evernham drove her car to victory in a United Sprint Car Series race at Carolina Speedway, only to have it destroyed in an accident soon after. The car was restored this past December and made available for presentation at the 2019 Motorsports Racecar and Trade Show at the Greater Philadelphia EXPO Center in Oaks, Pennsylvania over the weekend. 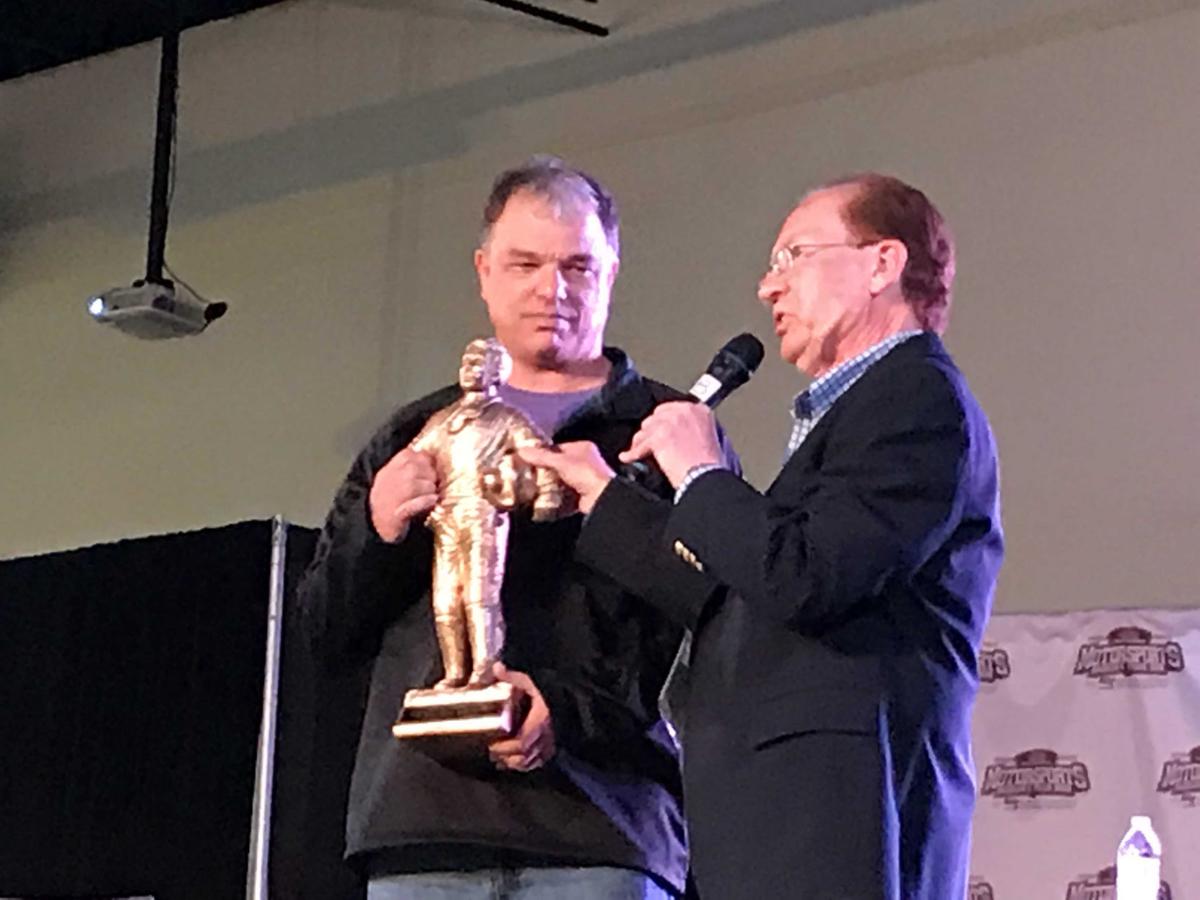 FIRST WIN OF THE YEAR -- Lance Dewease is honored as the Eastern Motorsports Press Association’s Northeast Driver of the Year by Vice President Earl Krause on Friday, Jan. 18.

HOW IT’S MEANT TO BE — In April of 2011, Erin Crocker Evernham drove her car to victory in a United Sprint Car Series race at Carolina Speedway, only to have it destroyed in an accident soon after. The car was restored this past December and made available for presentation at the 2019 Motorsports Racecar and Trade Show at the Greater Philadelphia EXPO Center in Oaks, Pennsylvania over the weekend.

FIRST WIN OF THE YEAR -- Lance Dewease is honored as the Eastern Motorsports Press Association’s Northeast Driver of the Year by Vice President Earl Krause on Friday, Jan. 18.

Attending the opening day of the 2019 Motorsports Racecar and Trade Show at the Greater Philadelphia EXPO Center in Oaks, Pennsylvania was exactly what this racing fan needed to get the juices flowing in anticipation of the upcoming racing season. For those in Southcentral PA unable to make the trip this past weekend, we are fortunate to have two similar upcoming events that are much closer to home.

Racing Xtravaganza 2019 will take place on Feb. 1-2 at the York EXPO Center. Most local tracks will be represented with information and schedules, with upwards of 125 racecars of all types on display. Highlighting the show are the Miss and Junior Miss Racing Xtravaganza Pageants, as well as the return of the BAPS Cornhole Challenge, a 64-person, double elimination tournament comprised of area drivers. Vendors, seminar sessions and driver meet-and-greets will also be part of the show.

Two weeks later, the 41st annual Motorama Show gets underway Feb. 16-17 at the Pennsylvania Farm Show Complex in Harrisburg, PA. Billed as “the Nation’s largest all-indoor motorsports event,” Motorama features live indoor racing of all sorts, including two and four-wheeled motorcycle arenacross, midgets, karts, and RC racing, as well as a full custom car, truck and bike show. Other events include the Ms. Motorama Pageant and the always popular Robot Conflict competition. Vendors will also be present and lots of racecars on hand.

More information for this event can be found at www.motoramaevents.com.

New Lincoln Speedway general manager Jerry Parrish finds himself in a unique situation as both co-owner of the track and team owner of one of the speedway’s most successful drivers, seven-time Lincoln 410 track champion Brian Montieth.

During Friday’s press conference announcing the ownership change, an audience member asked Parrish if he considered this a potential conflict of interests.

“I love sprint car racing, but I don’t think I’d have gotten involved with the purchase of the track if I had to hang my team up,” Parrish said. “We’ve talked about this and I don’t really see (a conflict). Our team is well respected, we don’t cause a lot of problems in the pits. We’re not asking for any preferential treatment. As a matter of fact, I know we’ll be scrutinized even more and we’re fine with that. I just think the racing at Lincoln Speedway without Brian Montieth would not be the same.”

Despite racing a limited schedule, Lance Dewease won a lot in 2018.

It turns out he’s already picked up his first win of 2019.

On Friday, Dewease was announced as the Eastern Motorsports Press Association’s Northeast Driver of the Year. Founded in 1968, the EMPA’s media members regularly vote on who they feel was the top driver in Northeast racing.

Upon accepting the prestigious individual award, Dewease was quick to point out that it was a team effort and thanked car owner Don Kreitz and legendary wrenchman Davey Brown, Sr.

“(This statue) will go next to some very special trophies,” Dewease said. “It’s an honor, it really is. The names that are on this list are just amazing. It took me 34 years to get on this list, so we’re definitely honored to win this award.”

According to Dewease, plans for 2019 will be much the same as the past few years, with the 69K team running around 40 races and competing at all the big local shows.

And winning, no doubt. He’s already one up on everybody else.

NASCAR Hall of Fame owner Ray Evernham and his wife, former sprint car driver Erin Crocker Evernham, made an appearance at the 2019 Motorsports Racecar and Trade Show on Friday, signing autographs at a display that included a collect of the Evernhams’ racecars. Among them was a 410 sprint car that was driven by Erin Crocker Evernham with an interesting back story.

The no. 98 sprinter on display ran only three events. The first was on August 9, 2010, when Australian driver Brooke Tatnell, filling in for an injured Erin Crocker Evernham, drove it to a fifth place World of Outlaws finish at Oskaloosa (IA) Speedway. The second came a week later when Crocker Evernham finished 18th in the 50th Annual Knoxville Nationals, which to this day is the only time a woman has ever qualified for a Knoxville Nationals ‘A’ Main.

The following spring, on April 15, 2011, Crocker Evernham drove the car to a victory in a United Sprint Car Series race at Carolina Speedway. But after crossing the finish line she jumped the cushion in turn one while attempting to lap her husband, resulting in a flip over the first turn wall and into the woods outside the track, destroying the car.

The car was restored to its original glory and presented to Crocker Evernham just a month ago as a Christmas surprise.

It’s hard to believe this year marks 20 years since the untimely death of Kevin Gobrecht in a racing accident with the World of Outlaws. During an interview with me on Friday, Scott Gobrecht relayed a story about how he recently felt his brother’s presence while making his decision to purchase Lincoln Speedway. In Scott’s words:

“I drive by Lincoln a couple times a week, just during the travels I have, and as I was driving by a song came on the radio called ‘Time of Your Life’ by Green Day. The significance of that song is that when Kevin passed a very special friend of mine, Bill Klingbeil, put together a compilation of Kevin’s interviews on a cassette tape, and in between he played that song just to transition from interview to interview. So over the years that song has always kind of stuck in my head and every time I would hear it I’d get emotional and cry, all that good stuff.

“Well, here we are some 20 years later, and that song doesn’t get played all that much anymore, but it happened to come on the radio when I’m driving by Lincoln Speedway. And as I’m driving by – this is on a Monday – there’s a mailbox there that has four vertical numbers on it. You could tell they had some sort of party at the house the day before because they had balloons attached on the mailbox that yesterday were probably floating in the air and the day after they’re kind of hanging down. So I’m driving by this mailbox and the balloons hanging down are covering up two of the four numbers, and the two numbers that were left were number 92 (Kevin’s number), the song’s on the radio, and I’m driving by Lincoln Speedway. And all of this is going on at a period of time when the chance of me being involved in an ownership capacity at the racetrack is starting to gain some traction and become a real possibility.

“I knew then that he was sending me a sign that you need to find a way to make this work and get it done. He was talking to me.”

Halloween has never been my favorite holiday. But that doesn’t mean I don’t miss it.