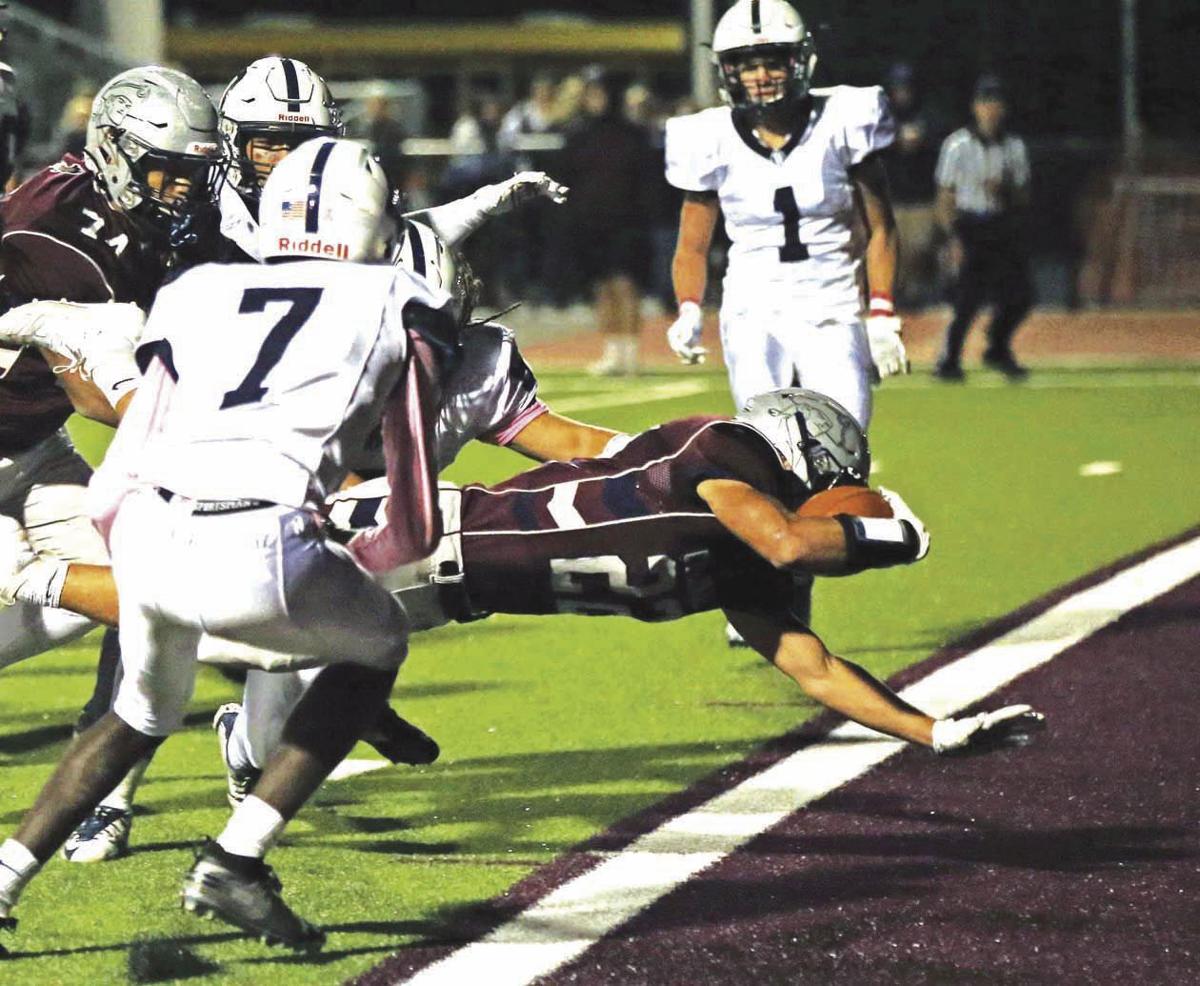 STRETCH FOR SIX — New Oxford’s Hunter Shaffer lunges into the end zone for a touchdown during last year’s game against Dallastown. Shaffer returns for the Colonials, who have moved down the YAIAA-1 into the YAIAA-2 this fall. 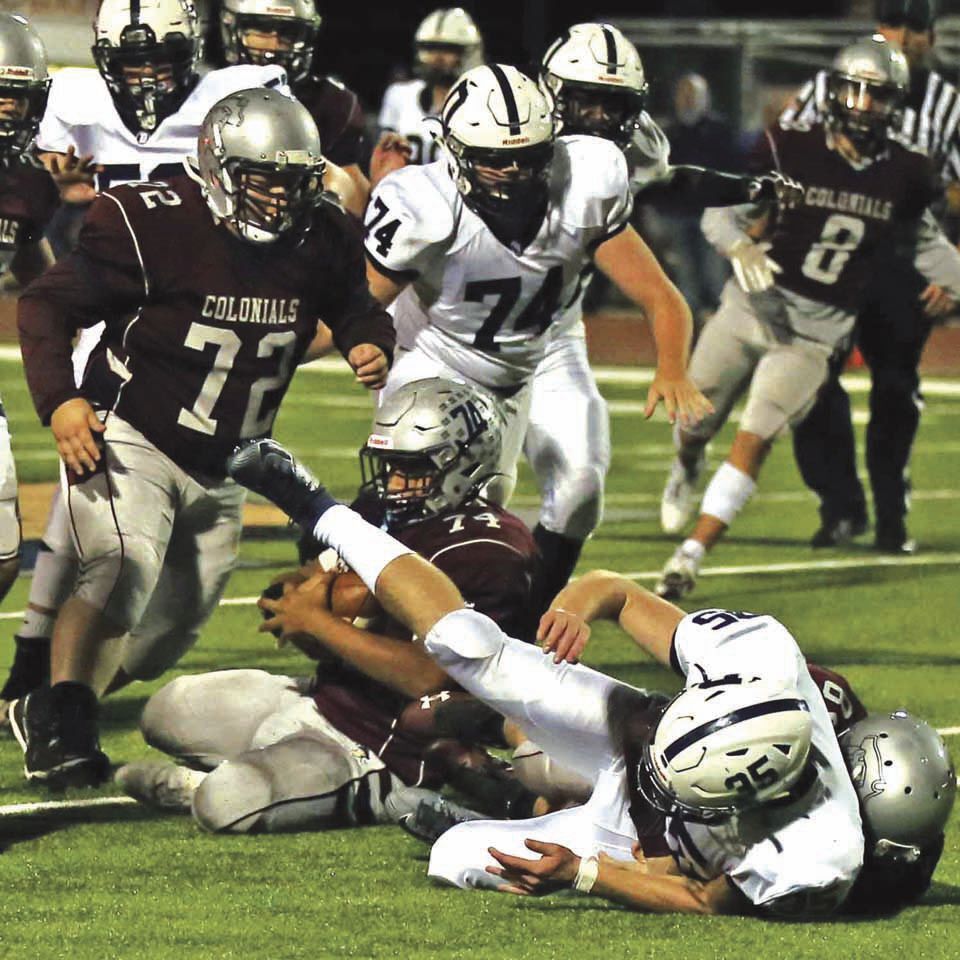 ALL OVER IT — New Oxford’s LaDamien Williams recovers a fumble during last year’s game against Dallastown. Williams, a two-way starter, will be the leader up front for the Colonials.

STRETCH FOR SIX — New Oxford’s Hunter Shaffer lunges into the end zone for a touchdown during last year’s game against Dallastown. Shaffer returns for the Colonials, who have moved down the YAIAA-1 into the YAIAA-2 this fall.

ALL OVER IT — New Oxford’s LaDamien Williams recovers a fumble during last year’s game against Dallastown. Williams, a two-way starter, will be the leader up front for the Colonials.

The New Oxford football team is about to enter uncharted waters, and it will do so without its longtime leader manning the wheel.

Record-setting quarterback Brayden Long played his final snap for the Colonials last November in the District 3 playoffs. When the final whistle blew in that loss to Cedar Cliff, Long’s remarkable scholastic career concluded with 6,622 passing yards, an Adams County record. He threw 67 touchdown passes to share the all-time career mark among county players.

Long’s productivity in 2019, which included 30 TD tosses as well as more than 350 rushing yards, will be extremely difficult to replicate in 2020.

His leadership will be impossible to replace.

“Brayden is a guy who is irreplaceable,” said Colonial head coach Jason Warner of Long, who is playing for Slippery Rock University.

Stepping into the spotlight will be senior Connor Beans, tabbed by Warner as his starting QB. Warner made it clear to his new signal caller that he must resist the urge to fill Long’s shoes.

“I told Connor, your team doesn’t need you to be Brayden Long, your team needs you to be Connor Beans,” said Warner. “Do the work and we’ll put you in the best position possible to be successful.”

Beans has been patiently waiting in the wings behind Long, and now his time has arrived. Warner doesn’t expect to rip any pages out of his playbook just because No. 10 won’t be back in the pocket slinging it around the yard.

“Connor has been playing behind Bray for three years as his understudy and he’s had the opportunity to learn and emulate him,” said Warner. “He throws the ball very well which excites us the most. Connor gets it out quick and we still have the deep threat and mid-range routes. I’m excited to see him get his shot.”

Opposing defense are surely excited to not see Abdul Janneh lining up at wideout for the Ox. The electric receiver who now suits up for Duquesne University left a trail of toasted cornerbacks in his wake. Janneh’s senior season was one of the best in Times Area history as he caught 57 passes for 1,072 yards and 14 touchdowns. His yardage and TD totals are second-most in the Times Area since 1997, behind only Gettysburg great Terrill Barnes.

Anthony Witherow, Ben Leese and Troy Dubbert will all see action at wideout.

“I really like the receiving corps we have,” said Warner. “We have a quality group of young receivers and we have enough guys to spread the ball around and make the defense play the whole field.”

Fullback Dylan Forbes (2 rushing TDs) is back alongside Shaffer (305 yards, 3 TDs) to provide stability in the backfield. That duo will be working behind a green offensive line that returns just one starter in senior LaDamien Williams. A two-way starter the last two years, Williams will be the ‘glue’ of the line while the newcomers work through anticipated growing pains.

Getting that unit up to speed will be crucial as the Ox looks to bolster a ground game that ranked last locally at just 84.5 yards per game.

On defense, Williams and Torbyn Eakins will anchor a line that includes sophomore Brittyn Eakins, Torbyn’s younger brother. Juniors Derek Noel and Jaydan Seiler are also be counted upon to provide pop up front.

Senior Payton Mathis returns at an outside linebacker spot while the secondary will include Witherow at safety and Herring and Leese at corner.

The Colonials will have a fresh foot in the kicking game following the graduation of steady Patrick Parrish, who drilled six field goals and 38 extra points last year. Josh Little, who is new to football, gets the nod.

Also new to the Colonials is their division. New enrollment figures in the offseason caused New Oxford and Dover to swap divisions, with the Ox dropping to YAIAA-2. Warner sees both sides of the coin as his staff began preparing for a new batch of opponents.

“Without a lot of game film we have to relearn our opponents,” he said. “We know their base offense and defense, but not personnel. We have to get to know our opponents and what they do, but the same goes for them, too. It’s an even playing field.”

New Oxford, which has only six regular-season games scheduled, opens the season at home on Friday against Susquehannock. Warner said the school hopes to pick up a game to fill a Week 5 void created when a non-conference contest against Conrad Weiser was cancelled.

He’s also hopeful that spectators will be allowed to attend games this fall.

“We’re hoping for the best but at this point we just don’t know,” he said of the fan policy. “What’s a Friday night game without the band playing the fight song and parents seeing the game live?”

Mrs. Knox, my high school English teacher, must be tossing and turning in her grave. Have you ever really listened to some of the phrases used…

Inequality and poverty in Adams County

In many ways, Adams County consists of two separate economies. One economy is made up of relatively affluent entrepreneurs; professionals empl…