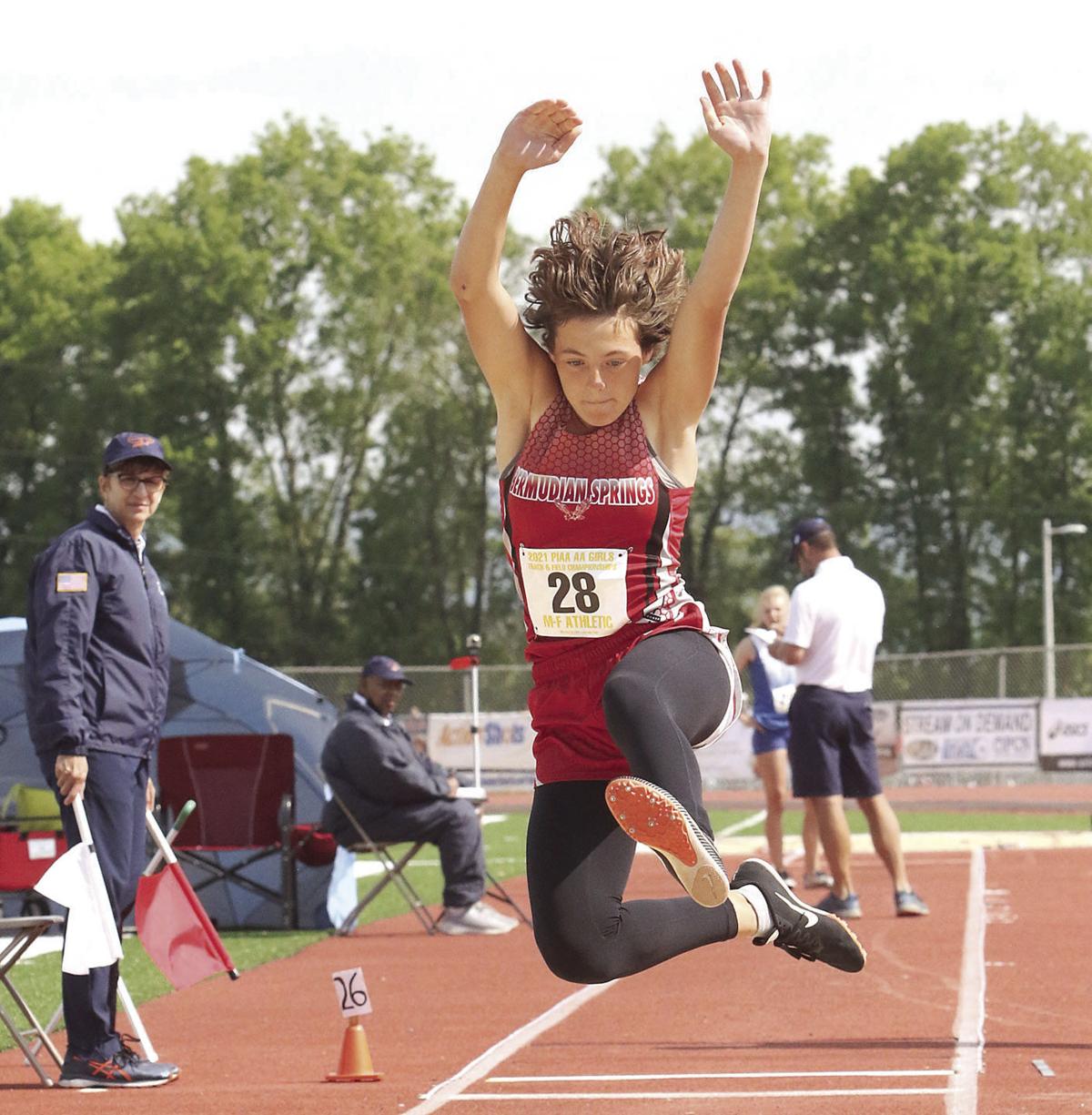 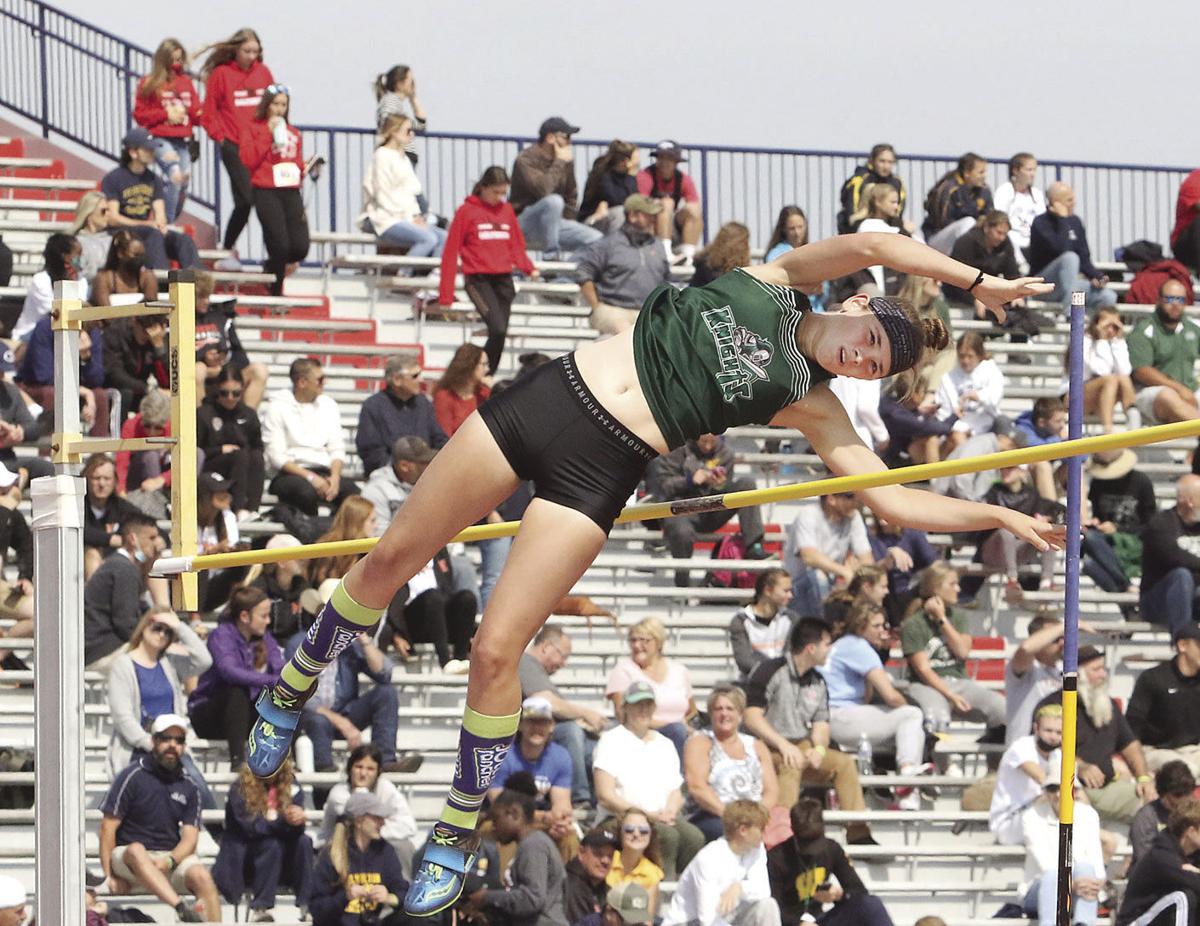 UP AND OVER — Fairfield’s Aliyah Hillman clears the bar during the Class 2A girls’ pole vault at Friday’s PIAA Track and Field Championships at Shippensburg University. 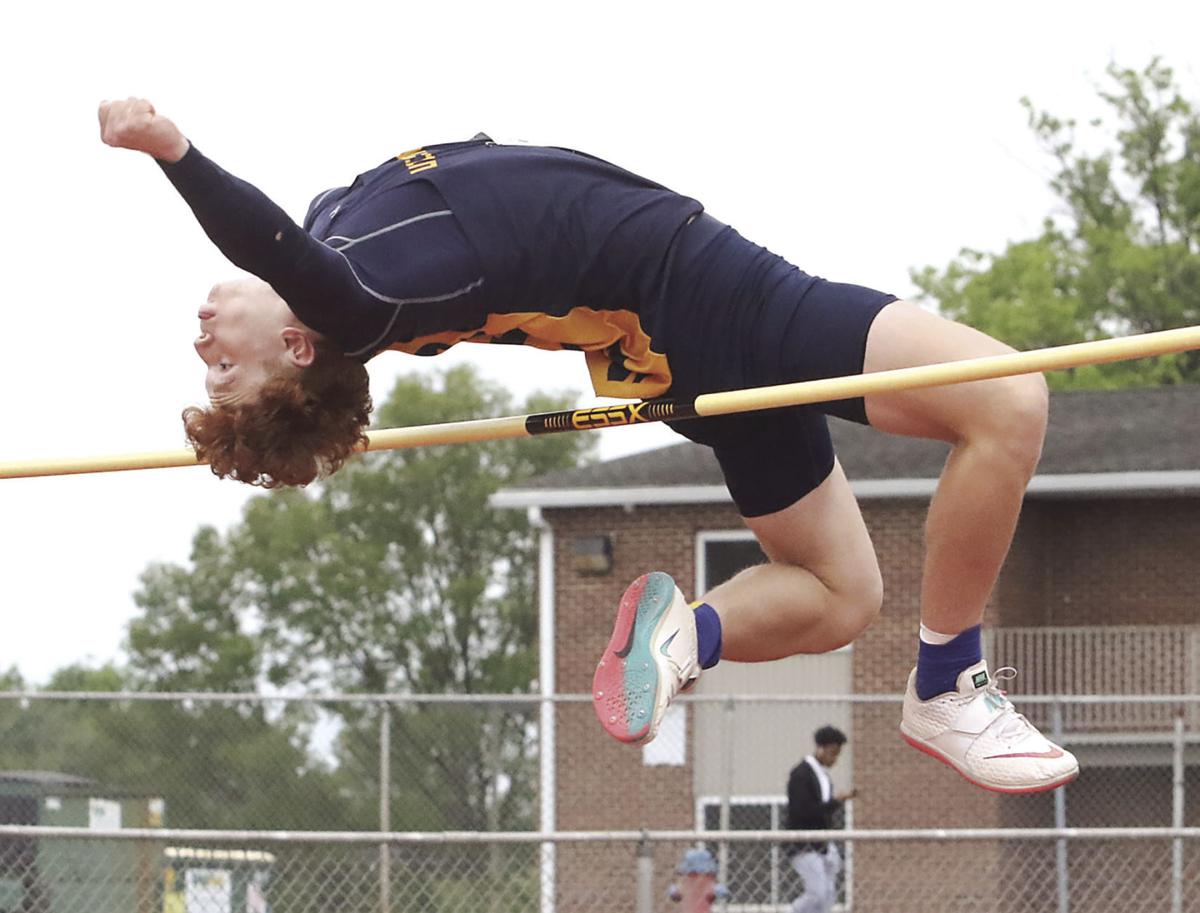 UP AND OVER — Fairfield’s Aliyah Hillman clears the bar during the Class 2A girls’ pole vault at Friday’s PIAA Track and Field Championships at Shippensburg University.

Three months ago, Alison Watts was just a freshman trying out the jumps for Bermudian Springs. Today she is Class AA state champion in the triple jump.

Under a different format than past years the PIAA track and field championships, held at Seth Grove Stadium at Shippensburg University, featured all of the Class AA competition on Friday, while the AAA meet will be today.

The cheerful, unassuming yearling put together a series of jumps that was better than she, her coaches, or her competitors could have imagined. The District 3-2A champion last week, Watts came into states with a goal of just trying to get a personal record (PR), and that she did on her first jump on Friday.

Watts’s first jump measured 37-feet-8.25-inches, which broke her own Bermudian school record by four inches. With that initial effort, it was not likely that anyone would surpass her. With her second attempt, Watts soared a remarkable 38-4.5, which was better than the rest of the field by over one foot.

“I didn’t really think about this being my first time in the state meet until everyone started mentioning it,” Watts said, “and that made me a little nervous. I was really looking forward to getting a PR, but I didn’t think it would be by that much. I was just excited to PR, but I wasn’t really paying any attention to how anyone else was doing.”

Everyone else was certainly paying attention to how she was doing, and had to resign themselves to competing for second place. In all, Watts had four jumps over 37 feet, and three of them were better than Charly Schlauch of Bloomsburg, who jumped 37-2.5 for second place. Schlauch is a freshman as well, and it is unusual for athletes so young to excel in the jumps. Despite the outstanding effort, Watts thinks she can get better.

“I’m still learning about the event,” said Watts. “I think my second phase can be a little better still, but that’s just going to take time.”

In the long jump, Watts popped a fine jump of 16-11 to place sixth. Had she jumped a PR in that event, she would have matched winner Sarah Wagner’s effort of 17-9. The North Schuylkill senior has jumped over 18 feet this season.

“This whole thing has been so exciting,” Watts said. “I mean, there are a lot of people, and all the people cheering – at first it was kind of stressful, then I relaxed into it. Once I got the first jump out of the way, I felt better.”

While not able to match his post-season streak of victories in the high jump and triple jump, Littlestown’s Dante Elliot had a fine day, placing fourth in the triple and tying for third in the high. Coming into the meet with the top seed in both jumps, Elliot found himself in the situation of having to compete in both at the same time. It was the same situation in the YAIAA meet, but the level of competition at the state championships is higher.

“The competition was really something,” Elliot said. “At YAIAA I won the triple on my first jump, but today with all these good jumpers, I had to mentally just keep pushing.”

Elliot was able to muster a preliminary jump of 43-8, which placed him fourth going into the final. Loyalsock’s Idris Ali flew 45-2.25 on his third jump to take the lead. Before the final began, Elliot ran over to the high jump pit, and cleared 6-0 on his first attempt. It was then right back to the triple for his first jump in the final, and then back again to the high.

After clearing 6-2 easily, he went right back and finished at the triple. In the final, Elliot improved to 44-2.75, but it was not enough to improve his position. Off to the award stand for the triple jump medals, he was then finally able to concentrate just on the high jump. However, he missed his first attempt at 6-4, but was among five jumpers who moved on to 6-5. Coming down to his last jump at 6-5, he skimmed the bar and, despite a lot of bouncing, it stayed up.

“I can’t describe the feeling when I made 6-5,” Elliot said. “I knew that if I wanted a chance to win the title, that bar had to stay on. And then on my second attempt at 6-6, I was way over it, but I didn’t kick my feet out. I tried to work on my arch over the bar all season, and I finally got that, but I just couldn’t get my feet out.”

Two jumpers advanced to 6-6, Jake Hogg of Youngsville, and Logan Pfister of Chestnut Ridge, who has cleared 6-9. Pfister won at 6-6, then exploded over 6-7 for his winning height. Elliot and Hogg each had to do the running back and forth thing with the triple jump, but Pfister did not.

“I think this season shows that hard work always wins,” Elliot said. “Two years ago I was just OK. I made it to states, but I was plagued with injuries, couldn’t work through anything, and it was just a bad year. And then with Covid, in my off-season, I trained like crazy by myself, because I knew that if I wanted something, I had to go get it.”

In the boys’ long jump, Littlestown’s Jayden Weishaar, second last week at districts, jumped 20-7.25 to place 13th. To win a medal he would have had to jump 21-feet.

Bermudian’s Lily LaBure ran 16.70 in the 100 meter hurdles, the 13th fastest time in the preliminaries. It was not enough to make the final, missing by just over a half second. In the boys’ 110 meter hurdles, the Eagles’ Mike Carlson missed the final by a mere four hundredths of a second, running 15.69, good for ninth place.

Ryan Murphy had the race of his life last week in winning the district 300 meter hurdles for Delone Catholic. However, on Friday he stutter-stepped at the first hurdle and struggled the rest of the way. Murphy ran 41.89 to place 14th overall. Also in the 300 hurdles, Fairfield’s Emma Dennison ran 49.16, to place 15th in the girls’ race.

Also for Fairfield, steady senior Aliyah Hillman could not match her season PR of 10-6 in the pole vault, as she made 10-0 and placed in a tie for tenth. Places third through ninth cleared 10-6. Waynesburg’s Tara Shriver had the attention of the crowd just on her for a while, as she kept going up and up in the pole vault. She finally couldn’t go any higher, and won with a vault of 13-0, two feet better than second place.

There were some other exceptional performances at the state meet, some of which were the best in Pennsylvania this year. Boiling Springs girls’ 4 x 800 relay team blew away the field, running 9:37.94 to win by three seconds. Melissa Riggins continued her absolute dominance in the distance events for Shady Side Academy near Pittsburgh, running 4:48.91 in the 1600, and then following up with a runaway win in the 800 in 2:10.62. Both are the fastest girls’ times in Pennsylvania in 2021.

In the throws, Ashlyn Giles of Schuylkill Valley set a new state record in the discus, with a throw of 165-4. She won the event by over 22 feet. Wilmington’s Connor Vass-Gal heaved the shot put 62-6 ¼, winning the boys’ event by over 15 feet in what may have been the most dominating performance of the meet.

The sprints produced some eye-opening performances as well. Jake Rose led his Southern Columbia team to the state team championship with an amazing time of 14.10 in the 110 hurdles. He was just one-tenth of a second off the state record. And finally, Margaret Conteh, of Girard College High School, showed she is one of the best sprinters in the country, winning both the 200 and 400 meter dashes. Conteh first won the 400 in 54.27, after having run 53.88 to win the District 1 meet last week. She then came back with a time of 24.58 to destroy the field in the 200.

Southern Columbia won the boys’ state AA title with 62 points, well ahead of second place Scranton Prep (26). For the girls, Schuylkill Valley and North Schuylkill tied for the championship with 39 points each.

The AAA state championships will take place today at Shippensburg.

After graduating from high school, he enrolled in a community college EMT program. Upon graduation, he accepted a position with a municipal fi…