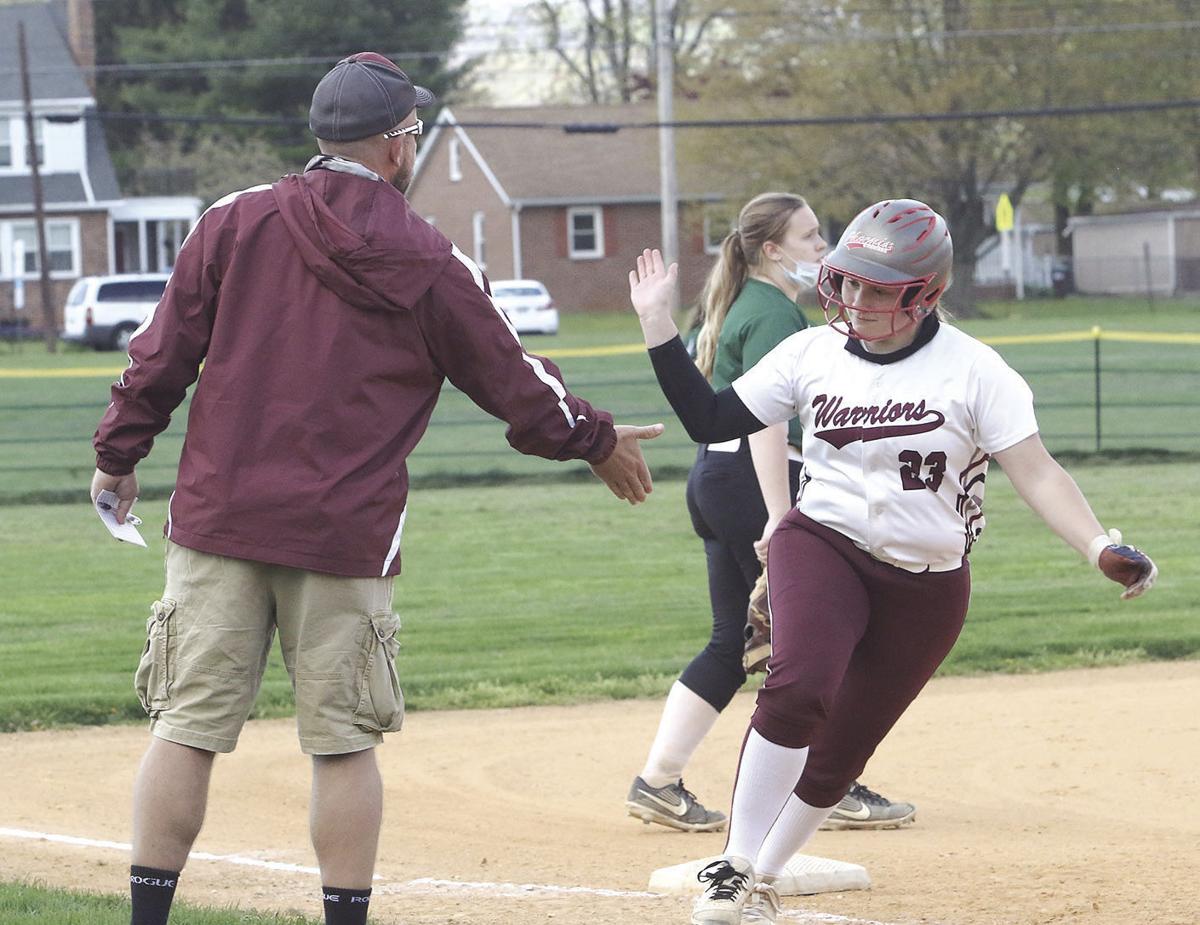 BIG FLY — Gettysburg’s Rachel Keller rounds third base and high fives her third base coach after a home run in the Warriors’ 14-6 victory over Fairfield on Monday. 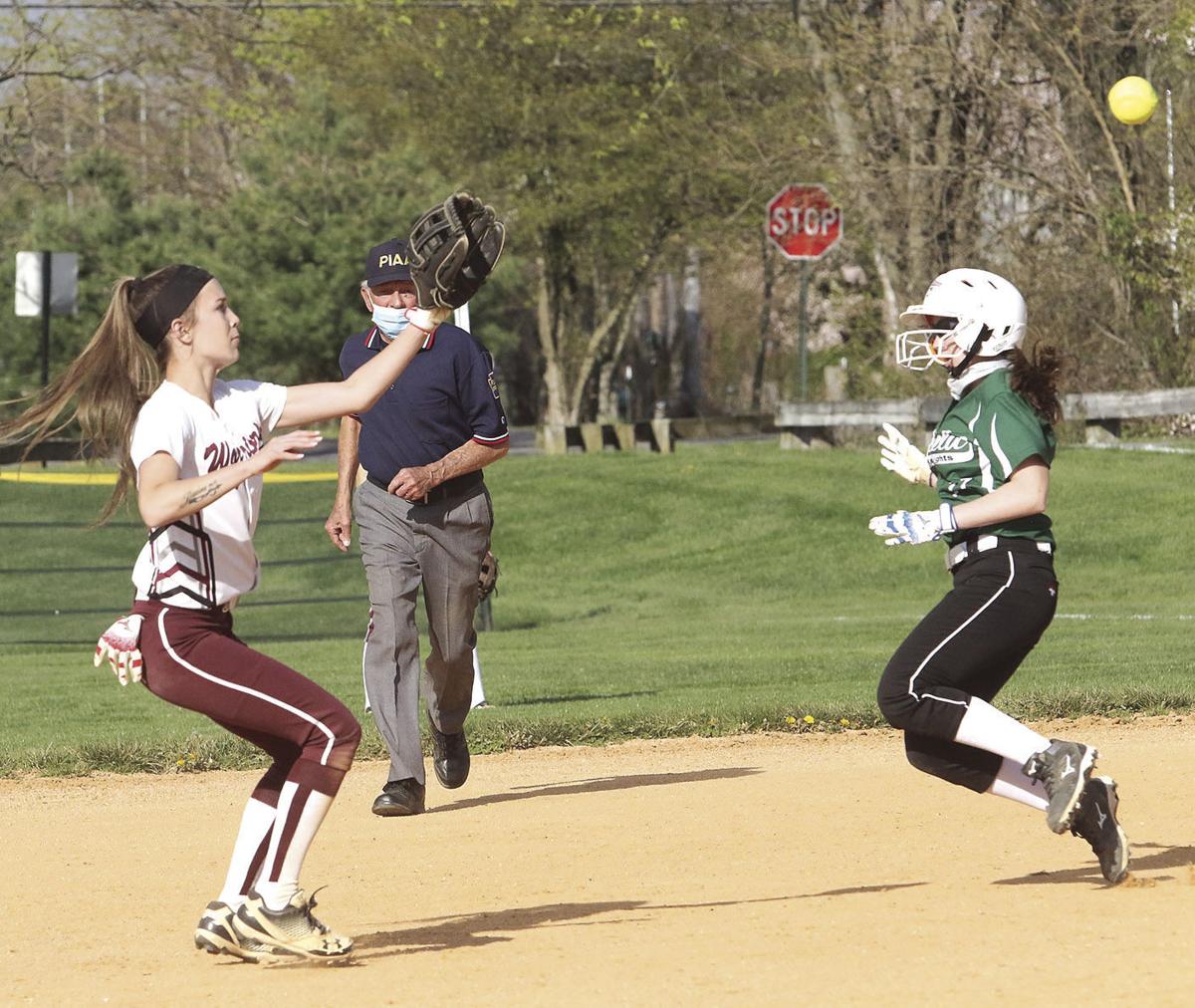 Gettysburg’s Ella Andras, left, prepares to receive a throw from catcher Rachel Keller atsFairfield’s Christina Hamilton attempts to steal a base. Hamilton was thrown out on the play.

BIG FLY — Gettysburg’s Rachel Keller rounds third base and high fives her third base coach after a home run in the Warriors’ 14-6 victory over Fairfield on Monday.

Gettysburg’s Ella Andras, left, prepares to receive a throw from catcher Rachel Keller atsFairfield’s Christina Hamilton attempts to steal a base. Hamilton was thrown out on the play.

Max Laing has been the head coach of the Gettysburg softball program for 20 years and he’s never had a team begin a season better than this year’s Warriors have.

They continued their blazing start with a 14-6 road victory at Fairfield on Monday afternoon.

“We’ve given up a good amount of runs this year, but we’ve been able to outscore our opponents,” Laing said. “The girls have confidence in themselves that they can hit the ball. If they do fall behind, they believe that they can come back.”

Senior catcher Rachel Keller added, “We’ve had a talented team for the last few years and things have finally all come together for us this year. We have the ability to hit like this every game.”

Monday’s contest was scoreless through the opening two frames as Gettysburg’s Jenna Brasee and Fairfield’s Ellie Snyder both hung a pair of zeroes on the board to get things started.

Keller staked the visitors to a 2-0 advantage when she unloaded on the first pitch she saw from Snyder with a two-run blast over the fence in center.

“I wasn’t looking for any specific pitch there,” Keller said. “It was a meatball, right down the middle and I swung at it.”

Ella Andras followed with a double, the first of her trio of two-baggers in the contest, and came around to score when Emily DeLaCruz singled. DeLaCruz was cut down at second trying to advance on the throw to end the inning.

Fairfield (2-3) answered with its own three-run uprising in its half of the third, as Kira Weikert drew a bases-loaded free pass. Then Cailin Swam singled home a pair of runs to level things at 3-3.

Things didn’t stay that way for long, though, as Aubreigh DeFrice tripled to begin the fourth and Abby Hurst duplicated the feat to plate DeFrice and chase Snyder in the process.

A two-out single by Brasee scored Hurst and the Warriors held a 5-3 lead.

The hosts trailed 6-3 in the fifth when Snyder walked to lead off the inning, but Brasee retired the next two hitters on infield pop outs, before Keller cut down Snyder trying to steal to end the inning.

“You have to keep the pressure on and we didn’t,” Fairfield head coach Terry Weikert said. “They kept hitting and scoring runs.”

Andras broke the game open with a three-double in the sixth, then Gettysburg added five more in the seventh to put it out of reach

Sophomore Sarah Devilbiss cranked a three-run shot in the bottom of the seventh to close out the scoring.

“Sarah has been struggling a little bit and she needed that home run,” Weikert said. “Hopefully that gets her going.”

Gettysburg is trying to qualify for the District 3 tournament for the first time since the 2012 season and the Warriors began Monday’s game in the eight spot in Class 5A. They would earn a home game if they finish in the top eight of the 16-team field.

“I’ve been expecting this to be a good year for us for the last few years,” Laing said. “We’ve got a lot of talent in our senior class and they’ve gained a lot of experience.”

Meanwhile, the Knights are at the opposite end of the experience spectrum, with just a few players who entered the 2021 season with substantial varsity playing time.

“We’re just a really young team,” Weikert said. “We’re inexperienced and maybe a player or two short of being a good team.”

Vote for your Gettysburg Times Athlete of the Week. Voting is open until 5 p.m. on Thursday. The winner will be announced in Friday's edition of the Times.

Life had given her the opportunity to experience both successes and failures. She once said, “The successes were more fun, but I learned more …