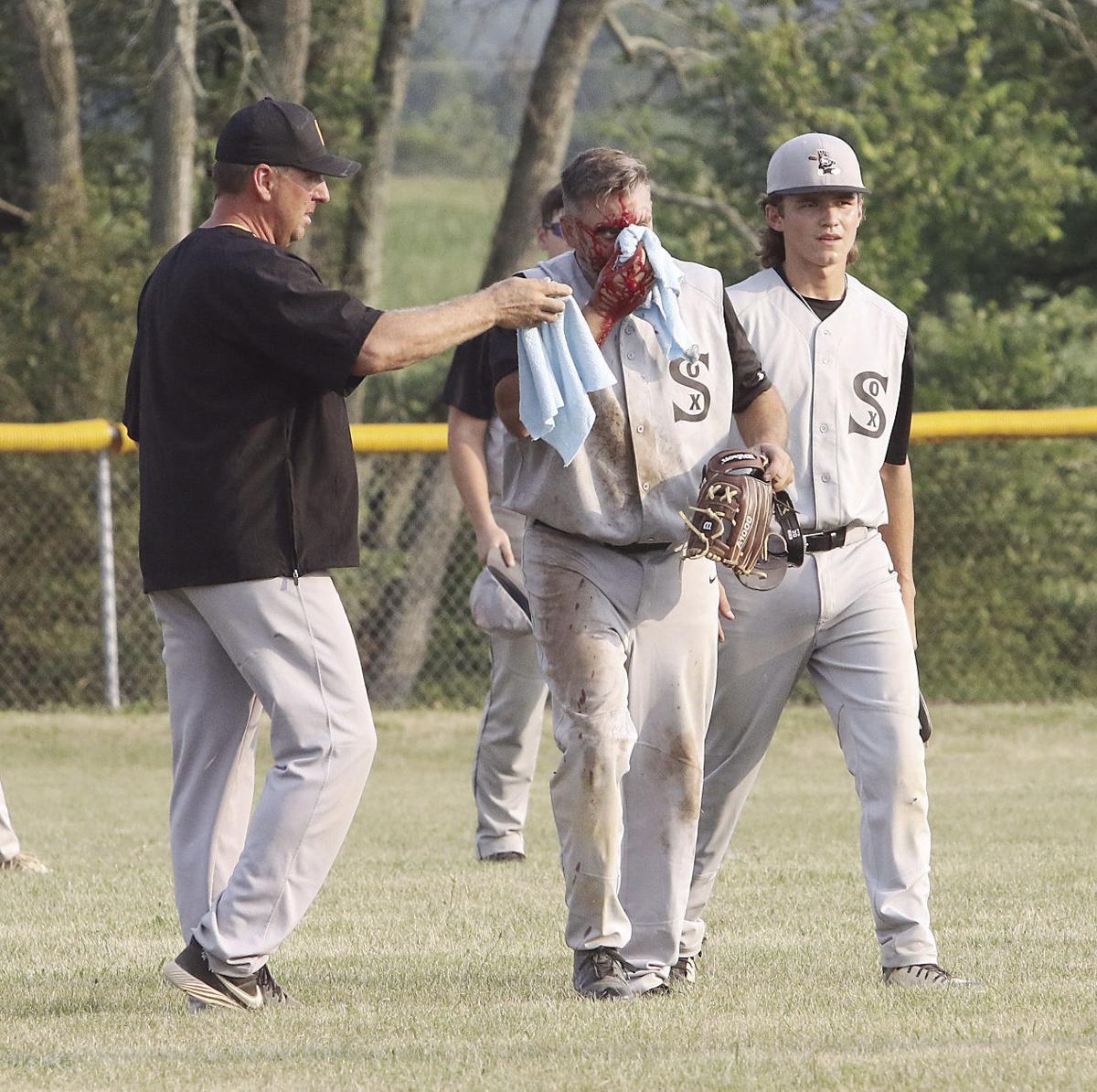 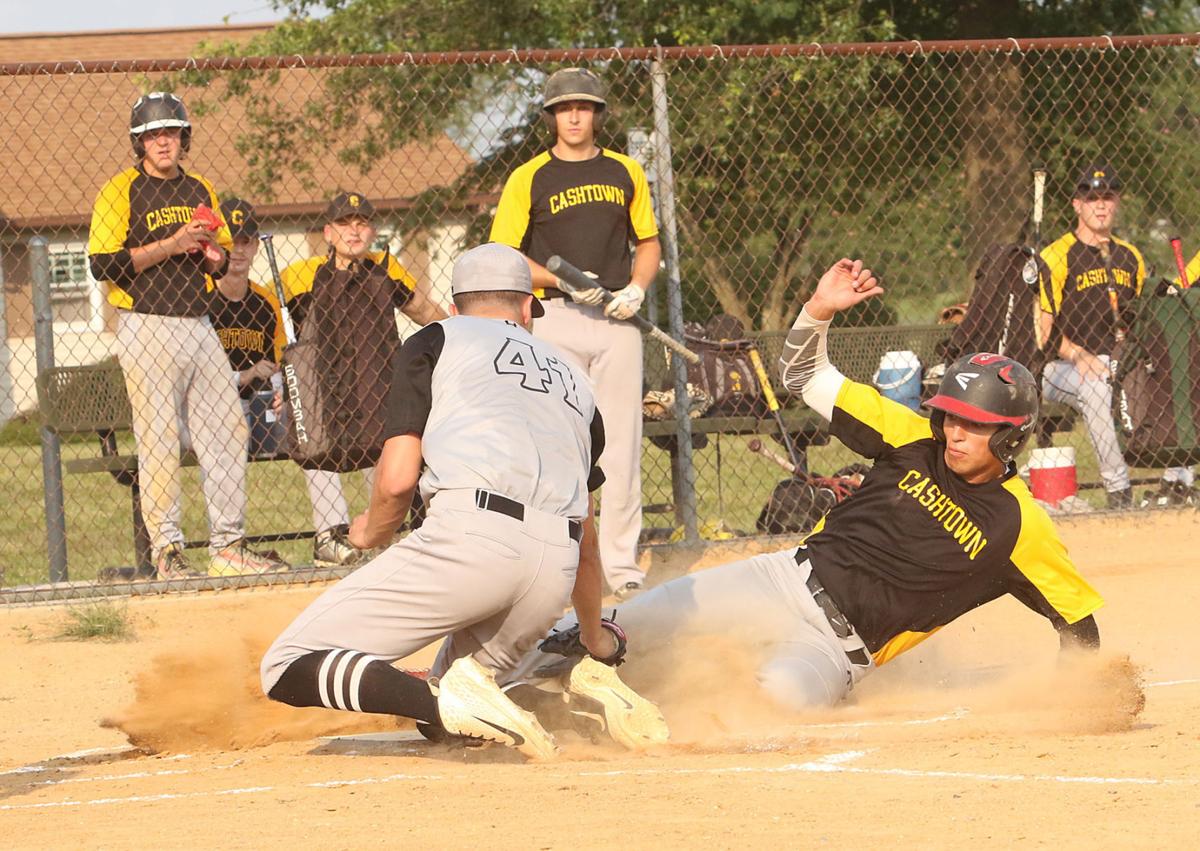 SAFE! — Cashtown’s Josh Topper slides in safely under the glove of Biglerville’s Mark Rogers following a wild pitch in the second inning of Cashtown’s 8-2 win at Oakside Community Park in Biglerville.

SAFE! — Cashtown’s Josh Topper slides in safely under the glove of Biglerville’s Mark Rogers following a wild pitch in the second inning of Cashtown’s 8-2 win at Oakside Community Park in Biglerville.

On Sunday, Cashtown’s Austin Kunkel pitched the Pirates to a victory over Littlestown.

Then, on just three days’ rest, the Pirates’ righty helped them to an 8-2 triumph over Biglerville in South Penn League action Thursday evening at Biglerville’s Oakside Community Park.

“I wanted to get one more game in before the playoffs start,” Kunkel said. “I didn’t feel like I had my normal movement or velocity, but it was good enough tonight.”

The postseason begins next Thursday and with the win, Cashtown seals up the third seed. Meanwhile, Biglerville is locked into the sixth spot. Meaning the teams will meet in a best-of-3 quarterfinal series that begins at Cashtown.

Kunkel worked six strong innings and didn’t allow an earned run. He gave up seven hits with seven strikeouts and one walk. He threw 75 strikes out of the 106 pitches that he threw.

“Austin lives three hours away, so he really has no way to work out. We collectively decided that it would be good for him to throw another game before the playoffs,” Cashtown manager Eric Ketterman said. “He didn’t have his normal stuff, but he was good tonight.”

Cashtown (19-7) got on the board first in the top of the second when Josh Topper came home on a wild pitch. Topper had led off the inning with a single. He moved to second on Zach Koons’ sac bunt, then a ground out by Brock Carpenter advanced Topper to third.

In the third, Tyler Reinert unloaded on the first pitch he saw from Biglerville southpaw Mark Rogers and sent it over the left field fence for a two-run round tripper that also scored Chase King, who had singled with one out.

Biglerville (14-12) got its only two tallies of the contest in the third when Tanner Byers flared a single to right-center that plated Logan Brewer and Connor Orner. Brewer had singled and Orner reached on an error, before Kunkel fanned the next two batters, setting the stage for Byers.

The hosts stranded a pair of runners in each of the first three frames and a total of eight for the game.

“We were a couple of hits away, especially early,” Biglerville manager Travis Byers said. “When you have a chance to score against these guys, you have to do it.”

Then in the fourth, Cashtown scored another run. This time Tempel reached on an error to score Carpenter, who got on when he was hit by a pitch with two down. J.C. Collins’ single moved Carpenter to third.

It was Carpenter’s turn in the fifth to knock in a couple runs, as he singled home Ethan Ketterman and Marshall Mott.

Reinert sac fly to score Tempel and a wild pitch that allowed King to come home put a bow on the scoring in the sixth.

Kunkel worked around a leadoff walk in the sixth to keep the six-run lead intact, then Tempel struck out the side in the seventh to end it.

Reinert had two hits and three ribbies, while Ketterman had a trio of knocks and King had two to pace the Buccos’ 11-hit attack.

“Tyler and Ethan have kinda carried us offensively in the second half of the season,” Eric Ketterman said. “We’ve had different guys get hot at different points in the season, but we’ve never had everyone going all at the same time.”

Biglerville’s offense was paced by a pair of hits from Brewer.

When the merits of “sustainable” growth are mentioned, the factor most often mentioned is more revenue for the local treasury.

It wasn’t one of the fancy colors. It was the original steel-grey. It was about eight inches long. It was behind her desk. The only people who…